So Liverpool's status as serious title contenders received the official rubber-stamp when Ferguson fired his first barb - a mild one by his own acerbic standards admittedly - in the direction of the Premier League leaders.

As a general rule, Ferguson ignores those who cannot harm Manchester United, so Rafael Benitez will have glowed with satisfaction when the old streetfighter hinted that pressure might play on Liverpool's nerves when the title race reaches its sharp end.

And the pressure will turn up another notch for the main title protagonists this weekend when Liverpool face the intimidating test of a trip to Stoke City on Saturday and Manchester United meet Chelsea at Old Trafford on Sunday.

The mind games have continued with Manchester United's Michael Carrick claiming Liverpool and Chelsea have missed a trick by failing to put daylight between themselves and the reigning champions.

The amateur psychology can be placed on one side ahead of a weekend that will tell us much about these three sides - and I will be at the Britannia Stadium and Old Trafford to see what they produce.

Liverpool have surprised many - myself included - by deservedly leading the table at the turn of the year. They have rarely had a better chance to claim the title since it last came to Anfield in 1990.

In answer to questions from Liverpool fans in August, I predicted a third-placed finish in the league and a cup as their return this season. The cup claim still stands but the league may yet offer the ultimate reward.

Benitez's side have not been showered in plaudits, but point a finger in the direction of the Premier League table and that is the only accolade they require.

Liverpool have compensated for stodgy home form with outstanding performances on their travels, characterised by a new resilience that has been missing from previous failed attempts to mount a title challenge.

Liverpool also have the spine required to go the distance, with an outstanding goalkeeper in Pepe Reina, defensive solidity, a midfield that now boasts width as well as strength in the centre, and a potent attack.

Benitez, crucially, is usually accompanied by good fortune and his stroke of luck this season has been the renaissance of Xabi Alonso, a midfield man he spent last summer trying to sell in his ill-fated and acrimonious pursuit of Aston Villa's Gareth Barry.

And their run to the top has been achieved, for the large part, without the world-class services of injured Fernando Torres and without £20m summer signing Robbie Keane justifying his lavish price tag.

This resilience will be examined thoroughly by a Stoke side that has proved more than capable of giving top sides a harrowing time in front of their own fans.

Stoke are fighting for their lives (not that this will change their approach) and will be fired up by manager Tony Pulis. It will be a test of physical and mental strength for Liverpool.

If they come through unscathed, it will be another sign that this may not be a title campaign destined to fade in the fashion of others.

Fast forward to Sunday and the meeting between United and Chelsea - two teams who will know they have to step up another level if they are to prevent Liverpool muscling in on their recent title monopoly.

Chelsea, in particular, have questions to answer as they stumble following a start that justified their status as pre-season title favourites.

It is hardly crisis time at a club lying second in the Premier League and in the last 16 of the Champions League, but the old Chelsea air of invincibility has currently deserted them.

The Stamford Bridge fortress has been breached by Liverpool and Arsenal and games that would previously have been won have seen points cast aside - the draw at Fulham and the FA Cup tie at home to Southend being prime examples.

After watching Chelsea on several occasions at Stamford Bridge, there is a worrying predictability about their play that has been exposed by Liverpool and Arsenal in particular. 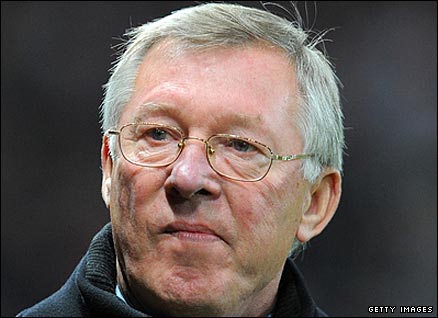 They, and others, have played on a tactical flaw centred on a lack of width in attacking positions - a sharp contrast to the supposedly austere Jose Mourinho days when he had Damien Duff, Arjen Robben and Shaun Wright-Phillips at his disposal.

Ferguson will have noted much of Chelsea's attacking threat can be neutered by closing down the full-backs - but he will also be aware they have looked a much more potent threat on their travels than at home.

How Luiz Felipe Scolari counters Ferguson will do much to answer questions currently being asked about his suitability for the rigours of the Premier League.

I would also have Joe Cole ahead of Deco in Chelsea's side every day of the week - a purely personal preference, but one shaped by watching several lightweight displays from the Portugal midfield man.

I still believe you write off Chelsea and Scolari at your peril - this is a team and a coach with an in-bred winning mentality and they have the opportunity to make a massive statement at Old Trafford.

United have made much of a fixture list that allows them to welcome Chelsea, Liverpool and Arsenal to Old Trafford in the second half of the season, seeing this as their chance to claw back lost ground.

And they will need a better return than the one point they gained from their away meetings with those three to harbour serious hopes of retaining the title.

United have hit top form in flashes this season, but the feeling remains that there is so much more to come.

This is where Ferguson's confidence about their title aspirations comes from - they have travelled course and distance before and their opponents know it.

Ferguson will also know his multi-talented attack of Wayne Rooney, Dimitar Berbatov, Carlos Tevez and Cristiano Ronaldo have yet to deliver on all of their potential this term, another sobering thought for those hoping to take the title away from Old Trafford.

In their differing fashions these will be two games to savour and an opportunity for the only three teams with serious hopes of winning the Premier League.