The Premier League's elite quartet ensured it was business as usual in the Champions League as they made their way into the last 16 and the knockout phase - but the passage was not always smooth.

Manchester United, Liverpool, Chelsea and Arsenal have cast a huge shadow over the tournament, with an English presence in every final since 2005.

Sir Alex Ferguson, Rafael Benitez, Luiz Felipe Scolari and Arsene Wenger will now have their sights set on Rome next May after achieving the first goal of navigating their way out of the group stage.

So how should we rate their chances as the Champions League moves towards the business end?

Ferguson was in typically feisty form about United's ambitions after they finished top of their group, albeit with a low-key draw against Danish side Aalborg at Old Trafford.

With that familiar steely glint in his eye he said: "It is important we finish top of the group and have the second leg at home. We will come to Old Trafford with a full house and a really good atmosphere.

"We are there, have got the track record and the players so let's go and have a go."

Ferguson is right to be optimistic, with United traditionally stronger as the season progresses and with the confidence of finally ending that nine-year wait to regain the Champions League, they have real chances of retaining the trophy.

History may stand against Ferguson and United, because it is almost 30 years since an English side won Europe's elite trophy in successive seasons, but they will feel no need to fear any of the teams left in the competition.

If Ferguson had a wish it would probably be to avoid Jose Mourinho's Inter Milan, although on footballing grounds alone they could be safely expected to see off The Special One and his new charges.

Inter Milan have barely been above average in Europe this season, winning only two of their six games and finishing behind Panathinaikos in their group.

But the sheer presence of Mourinho - and the hype he would engender as well as the usual dose of mischief - means Ferguson might like to save his old friend and his team for later battles.

Old Trafford will not want to be treated to Mourinho sprinting down the touchline in triumph as he did so famously with Porto in March 2004.

Ferguson, however, has indulged in some mischief-making of his own by claiming he would like to take tea and biscuits with Real Madrid president Ramon Calderon if they meet in the next round - no doubt to discuss his victory in keeping Cristiano Ronaldo away from the Bernabeu last summer.

Liverpool have been impressive as they made their way into the last 16 and the territory where they have traditionally flourished in recent seasons.

Rafael Benitez is a master of the two-legged European tie, with two finals (including a victory in 2005) and a semi-final on his CV since taking charge at Liverpool in 2004.

Liverpool have not indulged in any of their previous brinksmanship in getting out of the group stage, as they have done previously, and any team that draws them will have a nervous feeling in the pit of their stomach, especially with a second leg at Anfield.

Benitez is a proven strategist in Europe, but he will hope that time is a healer for Fernando Torres' worrying hamstring problems.

Liverpool's ambitions will be damaged if they are robbed of his ability to create a goal out of nothing, or Steven Gerrard's leadership and inspiration.

And what are the odds of the two great rivals Benitez and Mourinho being paired together and renewing the fractious relationship they had in England?

To say there is no love lost between the pair does not quite cover the animosity, although Benitez has twice overcome Mourinho in Champions League semi-finals when Liverpool have met Chelsea.

Liverpool would also have the psychological advantage of beating Inter over two legs in the last 16 earlier this year.

But you can guarantee Mourinho would relish getting under Benitez's skin once more - and it would be great box office to see the world-class coach and huge personality back on English soil again.

Benitez's side are a massive threat once they reach this stage of the competition, and while Inter, Villarreal or Real Madrid would offer a stern examination, they would be tests Liverpool are more than capable of passing.

Chelsea will be hoping to follow Liverpool's example of previous seasons, where stuttering form in the group games has led to a dramatic improvement and progress in the latter stages. 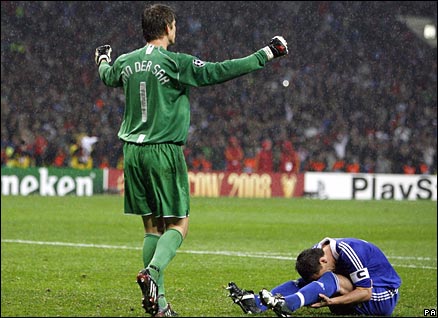 Coach Scolari will need to coax a serious improvement from Chelsea after unconvincing progress out of a group where they were well beaten by Roma in Rome and held in Bordeaux.

Even the game that stamped their passport into the last 16, the 2-1 win over Cluj, was a nervous affair against opponents who were spirited but hardly out of the top bracket of European teams.

In Chelsea's defence, there is every chance they will attack the knockout phase with a vastly-strengthened squad if Ricardo Carvalho and Michael Essien can join the campaign and Didier Drogba can stay fit and focused.

After finishing second, they are looking at some potentially hazardous tasks in the draw on 19 December, with the possibility of drawing Barcelona and the improving Bayern Munich.

Scolari was defiant after the Cluj win, insisting he was happy to take on anyone, but even the most optimistic of coaches would want to delay meeting Barcelona in the hope their current magnificent form fades by the time the last 16 ties are played.

Chelsea need to re-discover their air of invincibilty and the return of key players such as Carvalho, Essien and Drogba will help them achieve this.

If Scolari can re-create that quality, then the early predictions from pundits that Chelsea could win the Champions League this season may yet be fulfilled.

Arsenal are the great unpredictables this term - capable of beating both Chelsea and Manchester United but also able to conjure up defeats against Hull City, Fulham and Stoke City.

Wenger's side saw fortune desert them in the quarter-final against Liverpool, when they were arguably the better side over two legs, but they do not look in great shape to repeat that this season, losing their final group game against FC Porto in Portugal.

Arsenal's manager is the eternal optimist with an iron-clad belief in his team, but reality suggests they are rank outsiders to repeat their feat of 2006 and reach the final.

They currently look to have too many flaws to suggest they would survive a meeting with Barcelona and would also be tested by the likes of Roma and Bayern.

But only a fool would write Wenger and his team off and many things can change by late February and early March.

My belief is that Manchester United, Liverpool and Chelsea all have the capability to reach the final again given a fair wind and the luck of the draw - I do not see the same applying to Arsenal.

But lurking for all of these sides is the spectre of Pep Guardiola's Barcelona, inspired by the brilliant Lionel Messi. They would provide the most serious obstacle to England's so-called Big Four.

History, however, tells us that England's finest will all sense a genuine opportunity awaits them now the group stage has been safely dealt with.