Fabio Capello travelled to Arsenal on Tuesday night to watch Chris Kirkland in action - and may just have got a glimpse into England's golden future.

Not in the shape of Kirkland, but in the form of a glittering array of young talent who gave Wigan's goalkeeper a busy, and ultimately unhappy, evening against Arsenal.

And the man who can shape some of the key components of England's next generation is a manager who has been wrongly accused of ignoring home-grown talent in favour of polishing gems found on foreign soil.

Arsene Wenger has always judged players on ability as opposed to passport, and the start of an eloquent answer to his critics may have been on display as Arsenal demolished Wigan in the Carling Cup.

Wenger, as part of his usual strategy, has given youth its fling in the Carling Cup.

The results have been spectacular, with Sheffield United thrashed 6-0 and Wigan beaten 3-0 in dazzling displays of attacking football that have set the Emirates alight.

And, to the undoubted delight of Capello, there is a heavy English accent about Arsenal's current crop of youngsters.

It is a fact Wenger is keen to underscore, telling BBC Sport: "It is fantastic for the club, and don't forget that in this squad there are many strong English players."

Only time will tell whether these players develop sufficiently to become Arsenal regulars or force their way into England contention - who can make that definitive judgement yet? - but if they are good enough, Wenger will play them.

The signs, and the sounds coming out of the club, suggest this is a group of English players Wenger will be more than happy to place his trust in.

And with Aaron Ramsey of Wales also in the ranks, Wenger is ready to give the lie to those accusing him of ignoring young British talent.

David Bentley is the name often thrown in Arsenal and Wenger's face as a gifted home-grown talent whose route was blocked by imports.

But was he good enough at that time and have Arsenal really missed him? The answer to that, in my opinion, is "no".

Let's not forget he had an undistinguished season on loan at Norwich City before building his reputation at Blackburn Rovers and moving to Spurs. There have been very few days when Arsenal have cried out for Bentley.

And you could hardly quote Steve Sidwell, James Harper, Matthew Upson and Fabrice Muamba as examples of the ones who got away. Good players yes, but never likely to become Arsenal regulars.

Now we have the new breed, and Wenger is as excited as he has ever been about a group of young players under his tutelage. 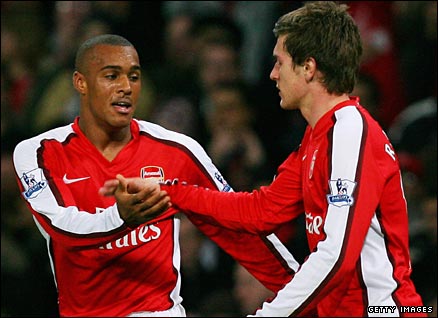 Sheffield United manager Kevin Blackwell saw their quality at painfully close quarters in the Carling Cup third round, and he told BBC Sport: "We knew they were a good set of lads at Arsenal, but nobody knew how good they were.

"They were awesome at times and would have beaten most teams. A lot of people would like to know how Arsene Wenger can do it.

"He has gone around the world to pick out the best - but there are also four or five top-class English kids in there so that can only bode well for the future of the national team.

"Arsenal are one of the few teams I would pay to watch. I've spoken to Arsene and he's admitted that these are the best single group of players he's had, they're exceptional. That's the best set of youngsters in Europe"

Jay Simpson took the headlines with two goals against Wigan, and he is an example of how Wenger nurtures and tests his players before deciding whether they will be a long-term proposition at Arsenal.

He was loaned out to Millwall last season, where he scored eight goals in 44 appearances and won the Professional Footballers' Association's fans League One player of the year award.

Like so many others, he has been at Arsenal since he was nine and has already won a place in the club's history as the first player to score a competitive hat-trick at the Emirates in an FA Youth Cup tie against Cardiff in February 2007.

The 19-year-old has pace, power and an eye for goal, as Wigan found out. Now he must take the next step.

The jewel in Arsenal's crown, however, according to those with an inside knowledge of the club, is 16-year-old Jack Wilshere.

He is already being tipped by many as a certain England player of the future, and his wonderful pass for Simpson's first goal against Wigan just hinted at the quality he possesses.

Wilshere is a slight figure and only made his reserve team debut in February, but the buzz surrounding him is already spreading beyond north London, and make no mistake Capello will know his name.

He has been likened to a young Liam Brady - praise indeed and an early sign of the weight of expectation on his shoulders.

Henri Lansbury has just turned 18, but again the gifted midfield man is already earmarked for great things and has earned England recognition.

Other names ready to push for places are Mark Randall, who was loaned out to Burnley last season, Kieran Gibbs (loaned to Norwich) and Gavin Hoyte.

The success of Arsenal's youngsters in the Carling Cup has led to inevitable questions about whether they could take the Premier League itself by storm.

Wenger the realist will know this is an experiment he would never undertake. They would acquit themselves well and would not struggle, but it is stretching reality to breaking point to suggest he could field these youngsters long-term and stay in the top four.

How would they perform away from the Emirates? How would they cope with regular exposure to the physical demands of the Premier League?

Wenger will drop these young players into the team when the occasion is right. Those occasional appearances, the Carling Cup, and those crucial loan spells will be their proving ground.

And, with some Arsenal fans believing one or two established names are feeling a little too comfortable about their places, the sight of these lavishly-gifted young men parading their talent may just cattle-prod anyone out of complacency.

I have never bought into the theory that Wenger was obssessed with foreign talent. He simply wants the best players playing in his team.

If they are good enough they play. If they are not they do not. It does not matter if they come from Peckham or Paris.

And he has paid for young English talent in the past and been burned. Remember the £16m he spent - and in large part wasted - on Francis Jeffers and Richard Wright?

All the questions being asked today about Arsenal's rookies will be answered in time. We do not know how far they will go, but it will be fun finding out.

What we do know is that Wenger has some gloriously exciting young talent under his wing - and England should be glad he is the man charged with their development.