Fabio Capello has done many things to be admired in the early months of his England reign - winning his first four World Cup qualifiers being chief among them.

The Italian's other major achievement is that he looks like he might have finally pointed Wayne Rooney on the path to true fulfillment at international level.

Rooney has been the glorious, untamed talent England has waited to build a team around since he took Euro 2004 by storm just before making his move from Everton to Manchester United.

And with five goals in his last three games for England, the signs are that all Rooney's promise is finally threatening to realise its true potential.

Even before the landmark win against Croatia in Zagreb in September, there was a lingering feeling that Rooney had not quite become the player everyone had hoped for when he arrived on the Premier League scene in such sensational fashion as a 16-year-old with his famous winner for Everton against Arsenal.

But England's best player is now showing that he is developing into their most important player, with his two goals in the excellent win in Belarus a fitting follow-up to his double in the victory against Kazakhstan.

And while it is always tempting fate when you are dealing with a talent and temperament as incendiary as Rooney's, even the tantrums that scarred previous England appearances - remember Windsor Park and the Bernabeu? - have currently disappeared.

As well as Capello's experience and guidance, which clearly has Rooney's total respect, he also owes a debt of gratitude to Emile Heskey.

Once again a player who has been scorned in previous times - not without reason on occasions it must be stressed - was the tireless workhorse who provided the perspiration to complement Rooney's inspiration.

Heskey set up Rooney's opening goal, but the latter's second was a masterwork almost all of his own making, fooling a Belarus defender before lifting a beautiful finish over keeper Yury Zhevnov.

Capello has recognised Rooney's importance, but has also determined that he works best alongside a powerhouse like Heskey. He is the perfect, if unsung, foil to Rooney's mercurial talents.

Rooney's goals were the highlight of another satisfying night for England and Capello as they continued their so far untroubled path towards South Africa and 2010.

They overcame first-half uncertainty, when they allowed some gifted Belarus players too much time and space, to end as convincing winners.

And another high point was Steven Gerrard's first-half goal, struck with ease into the bottom corner from in excess of 30 yards. 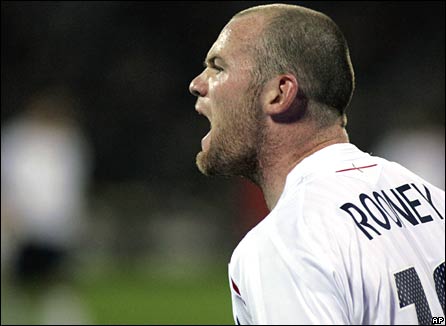 It was a mark of his class, which he also demonstrated with a lovely slide-rule pass to Rooney for England's third goal.

They were moments of pure quality that only strengthens my unswerving belief that if he is fit a place must be found for him in England's team. This is a point I know many on this blog disagree with, but I will not be changing my opinion.

Capello's astute tactical approach suggests he may yet be the man to solve the painful conundrum of how to play Gerrard and Frank Lampard together, although the jury remains out on the pair as a central midfield partnership.

Gerrard was tucked in on the left in Minsk, not a long-term proposition, but it could still not disguise what he can bring to England.

The performance and whole mood around the England camp reflects the competence and business-like approach Capello has brought.

He does not deal in false promises or easy sound-bites. He has been a consumate deliverer of results throughout his career in coaching and his current record in competitive games with England is flawless.

And if he continues to inspire the best in Rooney, the road to South Africa in 2010 will continue to be smooth.

Capello and England now have a six-month break before their next qualifier, away to Ukraine. It will give the coach and his players time to fine tune further in friendlies against Germany, Spain and Slovakia - and reflect on a job well done.