David Beckham's proposed move to AC Milan is, by any other name, a trial to discover if he is still fit for purpose as an England player.

AC Milan cannot lose because they get a player who is a consummate professional and will be fiercely driven by a revived ambition to play in a fourth World Cup.

Los Angeles Galaxy cannot lose because their prize asset can polish his craft and keep fit on very public display in one of the toughest leagues in the world.

And England coach Fabio Capello cannot lose because Beckham is removed from the lucrative comfort zone of Major League Soccer and Los Angeles Galaxy and placed in a hugely competitive environment that will deliver a definitive verdict on the state of his game.

In fact, the only part of this footballing equation with anything to lose is Beckham himself.

He has the opportunity to play at the highest level in Serie A and in the Uefa Cup, with the aim of proving he still has what it takes to be a regular part of Fabio Capello's resurgent squad.

Beckham can take his place in a stellar line-up that contains such names as Kaka and Ronaldinho.

But there is also the chance it will expose Beckham to a harsher reality - namely the fact that he no longer has the attributes to make an impact in the international game, thus finishing his England career in short order.

This is the gamble he is prepared to take, no doubt helped by Capello's message that he would not be considered for England's friendly in Spain in February if he was inactive during the MLS close season.

Capello will have given Milan a glowing reference about a player who forced him into a rare u-turn by sheer force of will and form at Real Madrid, and who he has retained in his England squad, albeit on a very limited basis in recent times.

Beckham's brief appearances have edged him towards Bobby Moore's tally of 108 caps, which he will equal if he plays in next month's friendly against Germany.

In England's last four games, he has graced the pitch for a total of 32 minutes, including injury time. 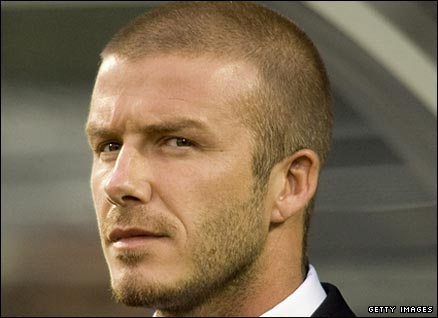 This has led to an outburst of indignation from those who believe the memory of greats like Moore and Sir Bobby Charlton is being besmirched by Beckham picking up cheap caps for cameos.

This is a very valid point, but not actually one I agree with.

The memory of Moore and Charlton is preserved in something far more precious than anything Beckham has at his disposal - namely a World Cup triumph in 1966. When they are recalled, it will be as winners of the Jules Rimet trophy, not by how many caps they collected.

The fact that his temporary move to Italy is an obvious attempt to extend his England career will only enrage them further, but why shouldn't he accept this opportunity?

After observing Capello at close quarters, I can say with absolute certainty that he is not picking Beckham out of the goodness of his heart, or to drag the last dregs of marketing from an iconic figure.

And Beckham is hardly going to refuse Capello's offer of a brief appearance for fear of causing offence.

He picks Beckham for England because he feels he has something to offer, presumably as the man who is still the best dead-ball specialist available to him.

Now he needs to know more, and Milan's offer can provide answers with England facing a six-month break from competitive action and Beckham pondering the inaction of an MLS close season.

If Beckham has serious intentions to continue with England, and he has, then he needs to be playing regularly in Milan and showing he still has what it takes away from the lower league standards of the MLS.

This is where this surprise offer of a temporary move comes in - for Beckham, Capello and England.

I have been a critic of Beckham in the past. I have watched his ambitions fall by the wayside in Japan, Portugal and Germany - when he has never left a lasting, positive impact on those major tournaments.

And that fact that he was held in such thrall by Sven-Goran Eriksson and Steve McClaren acted as a shield against the reality that his performances were not good enough.

But I have also watched him act as a superb ambassador for England around the world - an acceptable public face for foreign fans to focus on. He always had time and courtesy for the fans who thronged the camp just for a glimpse of the then England captain.

Beckham also deserves credit for doing what many thought he would be incapable of doing. He has merged into the squad pack and has been happy to take a low-key bit-part after giving up the cherished captain's armband in Baden-Baden in 2006.

When I sat just a few feet away from him at that emotional conference, I never thought for one second he would be in an England's coach's thoughts for the same tournament four years later.

He is in Capello's thoughts - but his stint in Italy will be an acid test for whether he remains there.