Manchester City produced a defining moment that changes football's landscape when they stole Robinho from under Chelsea's nose.

Chelsea and Roman Abramovich were suddenly forced to think the unthinkable on a gripping day of deals and counter-deals that kept fans hooked until the last fax had been fired off and the final contract signed.

Abramovich found, like so many others in so many other sports have found before them, that someone bigger and more powerful always comes along eventually.

But did anyone in their right mind think it would be Manchester City - the eternal sideshow of English football?

City fans woke up on Monday morning content that Shaun Wright-Phillips was back home and celebrated with two goals in the win at Sunderland.

Little did they know that within hours they would be transported on a magic carpet ride that was mind-boggling even for a club well-versed in playing fast and loose with the emotions of their followers.

Thaksin Shinawatra was effectively out of the door and the Abu Dhabi United Group, fronted by Dr Sulaiman Al-Fahim, was in charge.

And he did not just deliver a statement of intent - he bulldozed through the Premier League's established order with a display of financial firepower that stunned Manchester United and left Chelsea bruised and humiliated.

City first put the frighteners on United by having a bid accepted for Dimitar Berbatov - and when that trail went cold turned on Chelsea to lift the target they have coveted all summer before they even had the chance to see it coming.

It was a show of strength that is more worrying, in the short term, for Arsenal and Liverpool than Chelsea and United because they are more vulnerable to the advances of a potential gatecrasher to their top four cartel.

But what a day - and what a sensational transfer City pulled off by landing Real Madrid's Robinho.

Chelsea chief executive Peter Kenyon was always confident he would land the Brazil superstar - and why not?

He stated his intention to go to Stamford Bridge and set about making it impossible for him to stay at Real Madrid.

What Kenyon did not count on was the sudden, dramatic reality that Abramovich's billions are no longer the guarantee they once were - in fact they are no longer a guarantee at all.

The player who said "I am only thinking of Chelsea" 48 hours before signing for Manchester City showed exactly where his loyalties lie.

The rules of the market, once shaped by Abramovich's vast wealth, have changed after ADUG bought into what they are already calling "Middle Eastlands".

Chelsea are not used to having the rug pulled out of them in such spectacular and public fashion and the response from Stamford Bridge will be intriguing.

So what are the ramifications for City as they and their supporters bask in the after-glow of the Robinho coup and the vast possibilities opening up in front of them?

Whisper it but Robinho might be a major gamble at £32m - a talent more likely to flourish under Luiz Felipe Scolari at Chelsea and surrounded by superstars.

And there will be added pressures on boss Mark Hughes because it is already clear ADUG are not in this to settle for second best. They will provide vast resources but Hughes will be expected to meet what will now be huge demands. 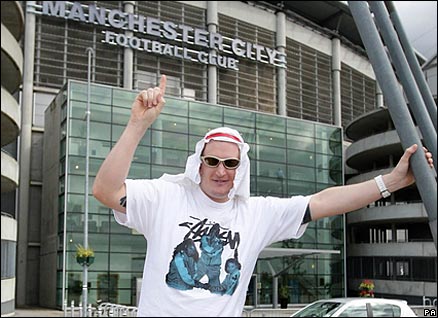 Hughes must not allow his new paymasters to force players on him. If he feels the way forward is an up-and-coming youngster from the Championship rather than a superstar who will sell shirts, then he must stand his ground firmly.

But Hughes is an outstanding manager who will thrive on this new pressure - and no-one should deny City fans their delight after years of suffering in the shadow of their illustrious neighbours.

It was a quite a sight to see the expressions of stunned bemusement as it sank in that they had trumped the once all-powerful Chelsea for Robinho. You could not help but be happy for them.

City also managed to put the wind up United for a while by muscling on the Berbatov action - so it has been a perfect start to the new era.

The transfer window is, in reality, a farce that should be scrapped - but days like Monday do give it a sinister appeal all of its own as clubs race around desperately writing cheques in an undignified scramble.

Chelsea were major losers in that rush. They had settled on their prime target and sat back and waited - only to be bundled out of the way seconds before the window shut.

It will be have been an uncomfortable moment for chief executive Kenyon when it became clear Real Madrid, unhappy with the manner of Chelsea's pursuit of Robinho, packed off their prized asset elsewhere.

Manchester United finally landed Berbatov, and while Spurs fans will be happy with the £30m-plus they reportedly received, it is not a good signal that they took a Manchester United reserve on loan in the shape of Frazier Campbell to smooth the deal.

New striker Roman Pavlyuchenko has pedigree, but Spurs fans will worry that the shadow of Sergei Rebrov lurks over this deal - a striker who looked world-class until he pulled on the white of White Hart Lane.

They had hoped to bolster their midfield, but strong links with Sporting Lisbon's Miguel Veloso and Standard Liege's Marouane Fellaini came to nothing, with the latter joining Everton.

Arsenal boss Arsene Wenger, as expected, kept out of the mad dash for signings. It is clear he is now determined to stand or fall by his cautious transfer policy, keeping faith with his young and lavishly-gifted current squad.

Liverpool have also gambled on Espanyol's Albert Riera, a player who under-performed in the Premier League on loan at Manchester City. Boss Rafael Benitez needs to get it right with this deal, but is he of the class required to turn them into serious title challengers?

And so to Everton, who tortured their fans in time-honoured fashion before paying a club record £15m to land Belgian Fellaini, outstanding against neighbours Liverpool in the Champions League.

It is a lot of money for an emerging talent, but the pressure on boss David Moyes and chairman Bill Kenwright to deliver a name signing was becoming almost unbearable after a frustating summer in the market.

And while Everton fans will be delighted at the deal, it says little for the planning, strategy and leadership of both Kenwright and Moyes that their major transfer was finally completed in the dying moments before the window shut.

Newcastle's transfer dealings have led to some head-scratching, and I doubt their fans will be entirely happy with the arrival of Deportivo La Coruna striker Xisco and loan signing from Valencia Ignacio Gonzalez.

They will have expected more - and rather more worryingly so might manager Kevin Keegan.

Sunderland fans will be happy to have a much-improved George McCartney back, but where are West Ham heading after also losing Anton Ferdinand?

It was the most dramatic and expensive deadline day ever - with figures produced by business advisory firm Deloitte revealing that £500m was spent by Premier League clubs this summer, an estimated £30m more than last year.

Manchester City were the big winners and Chelsea the losers after being left empty-handed after missing out on Robinho.

What are the thoughts of City fans the morning after the night before? And how do you feel your club performed in the transfer market this summer?