Should the Duck House be sold? 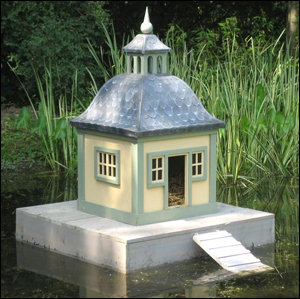 OK, the cash is going to charity. And Sir Peter Viggers never wants to look at his infamous duck house again. (He always said the ducks never liked it anyway.)

But should it really get pride of place at a business centre in the Midlands, after it was auctioned off with £1700 going to Macmillan Cancer Support?

The Duck House became an icon of the whole expenses scandal - Why not preserve it for the nation?

Let's not hide it away in Wolverhampton, if the duck house is to go on display why not put it on the front in Gosport?

Thousands of commuters flooding through every day would have a daily reminder of the public's anger that their trust was betrayed.

Sir Peter's ducks had taken flight long before the expenses storm blew in. He claimed that the birds, from a neighbouring wildlife reserve, had never enjoyed living there.

According to neighbours he had the duck house taken away on a low loader when he moved house. Exactly where it had gone, though, became a mystery.

The Daily Telegraph never photographed the actual house, perhaps it's even grander than the pictures suggest?

Some said Sir Peter had installed in the grounds of his French holiday home - canards Français now accomodated at the British taxpayers' expense.

Several offers had previously been made for the infamous duck house but it seems Sir Peter Viggers was trying to dispose of his most famous possession without too much of a flap.

He always argued that since the authorities refused his claim for £1645 to pay for the house he didn't deserve to be singled out. And in the end he did pay back as ordered for his other gardening claims.

But should we now start a campaign to stop the duck house going North?

Welcome to the hustings! I'm Peter Henley, the BBC's political reporter in the south of England. From parish councils in Sussex, to European politics in Oxford, this is the blog for you.

You can stay up to date with Henley's Hustings via these feeds.