The Young & Talented Rep Company was created by Suzann McLean and David Fielding in collaboration with Oxford House to give young actors a chance to perform and to express themselves with realistic and honest material that is a true representation of what it is like to be a teenager in society today.

We asked the group to answer some questions, so take a minute and get to know Young & Talented a little better… 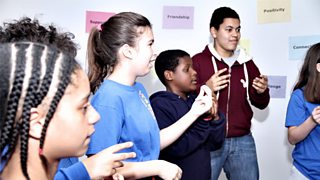 Who are Young & Talented?
The Y&T Rep Company is dedicated to providing outstanding opportunities for young people.
The plays they create are a reflection on topical and current situations that teenagers face today with subjects covered including underage pregnancy, gun and knife crime, rioting and incarceration.

Whilst being topical it is by no means a way to shock but just a need to give a voice to what the youth of today are witnessing and experiencing. Thanks to the BBC Performing Arts Fund Y&T Rep Company have partnered with Spotlight, a brand new £7 million youth centre in Poplar. Spotlight isn’t a youth club, or a youth centre - it’s a multi-million pound creative youth space designed to inspire. It has been shaped by young people, for young people.

Tell us about the project the BBC PAF CT grant will fund?
The Y&T Rep Company will present a play for the start of the Spotlight Theatre’s new season, a brand new piece written especially for them by David Fielding. Suzann McLean will direct and the two will create and produce, which has been the way since the company started.

There will be two youth theatre groups in Spotlight, the other one being the National Theatre. Whilst they will be doing introduction on drama workshops Y&T Rep are producing productions to the exacting standards of professional theatre.  So the Y&T REP are really proving themselves within the industry.

Give us 3 words that describe a performance by your group.
THRILLING, EMOTIONAL, REAL
OR
THRILLING, TRUTHFUL, DYNAMIC

The writing is fresh and unseen before; the audience are not expecting it and have no pre-conceived ideas beforehand. It has to be honest. It has to have a heart and a soul and is story driven; it also has to be interspersed throughout with comedy. The Roles have to be full and each character has a true depth to them, there are never any secondary roles in a Y&T play, each person is pivotal to the piece and the action that unfolds.

“These teenage actors were sensational! They made their characters come alive with both their speech and their body language. You can feel their character's pain. I was entranced from beginning to end.”

It was written with 20 Actors each playing a main role about a group of boys incarcerated in a prison for killing waiting to go into Adult prison for their crime. We were totally taken by surprise at how much the audience loved the show; it completely sold out with a waiting list of people wanting to get any return tickets.

---
Meet the Winners is a feature introducing you to some of the groups and individuals who have recently received a grant from the BBC Performing Arts Fund. We get to hear about so many fantastic projects and people who are keeping the performing arts alive in the UK, that we thought you should know about them too.

Meet the Winners: Rock It! Collective

The BBC Performing Arts Fund is a charity committed to developing new performing arts talent from across the UK. This blog provides the latest news on our grant-making, as well as tips and advice from experts in the business and updates on previous grant winners.