Disruptive snow possible at the weekend

Many parts of Yorkshire and Lincolnshire had their first snowfall of the winter yesterday, with coastal areas suffering the largest falls with around 10cms (4 ins) of fresh snow being reported by yesterday evening. 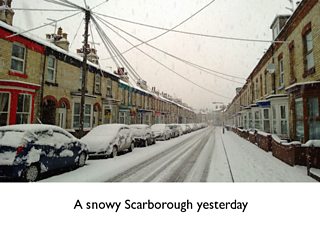 With high pressure developing across Scandinavia, cold air will be with us for the rest of the week and into the weekend, but for many the next couple of days will be dry, apart from occasional snow showers towards the coast.

Temperatures could easily reach -10C (14F) in rural locations where there's snow cover during the next couple of nights.

But by the end of the week and into the weekend, things will become much more interesting, as weather fronts make the first of what could be two attempts to bring less cold air in from the Atlantic, with a risk of snow and disruption to travel.

As is always the case in these situations there's a lot of uncertainty about how fast the less cold air moves north-eastwards.

Current indications are that the first Atlantic weather front will push across our area through Friday night and into Saturday as a weakening feature, bringing some increasingly light snow.

The next more active weather front will bring heavier snow on Sunday, which will eventually turn to rain as less cold air spreads eastwards.

But to highlight the uncertainty, some solutions are quicker with the snow and bring it across Yorkshire and Lincolnshire on Friday, with others slower.

There's bound to be changes to the timing of these systems as we get nearer the event, but there's clearly a risk of disruptive snow as we head into the weekend.

Next week looks very unsettled, and although the air will be somewhat less cold, temperatures are still likely to below average, with rain at times which could easily turn to snow in places, especially over the hills.

In the big freeze - but for how long?

I worked as a forecaster with the Met Office for nearly 15 years locally and at the international unit, after graduating with first class honours in Geophysics and Planetary physics at the University of Newcastle upon Tyne in 1992. I then joined the BBC in October 2007, where I divide my time between forecasting and reporting on stories about climate change and its implications for people's everyday lives.