A new global temperature forecast published by the Met Office, through to 2017, has scaled back projections of the amount of warming they expect compared with previous estimates.

The new projection can be seen below with more details on the Met Office website. 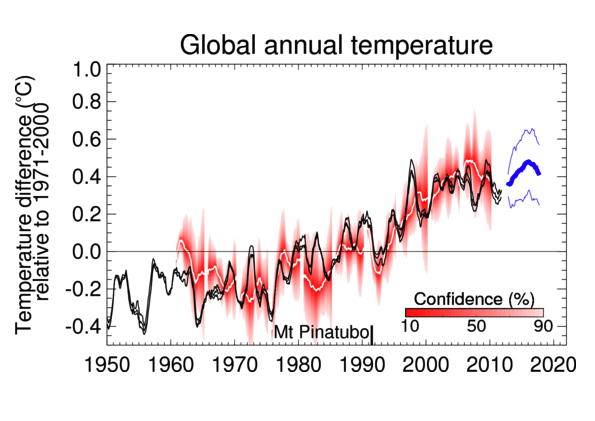 I have written several times in the last few years on the subject of Met Office global temperature predictions, and how they have been regularly too warm.

In the 12 years to 2011, 11 out of 12 forecasts were too high - and although all projections were within the stated margin of error, none were colder than expected.

One of their most high profile forecasts came in late 2009, coinciding with the Copenhagen climate conference.

It stated that half the years between 2010 and 2015 would be hotter than the hottest year on record, which I wrote about on my blog.

This already appears wide of the mark.

The latest projection seems to address this error with a prediction to 2017 in which temperatures rise 20% less than previously estimated.

In November 2009 I wrote about this levelling off in global temperatures, using research available at the time on the Met Office website.

In it, the Met Office explained that the levelling off of global temperatures that we were experiencing can be expected at time periods of a decade or less, because of the computer models internal climate variability.

But intriguingly, the research ruled out zero trends for time periods of 15 years or more.

The new projection, if correct, would mean there will have been little additional warming for two decades despite rising greenhouse gases.

It's bound to raise questions about the robustness and reliability of computer simulations that governments around the world are using in order to determine policies aimed at combating global warming.

The Met Office says natural cycles have caused the recent slowdown in warming, including perhaps changes in the suns activity, and ocean currents.

And mainstream climate scientists, who are in a majority, say that when the natural cooling factors change again, temperatures will be driven up further by greenhouse gases.

But climate sceptics, who have long argued that natural processes are either underestimated, or not properly understood, will not be surprised at this scaling back of expected warming.