Record December cold - should we get used to it?

Local and national records continue to be set as the UK remains firmly in the grip of exceptional weather. Last night Northern Ireland had its coldest night since records began in the 1800's.

The diagram below shows Leeming's average minimum temperatures so far this month, and compares it with December 1981 and January and February 1963. The winter of 1962/63 was the coldest of the last century. 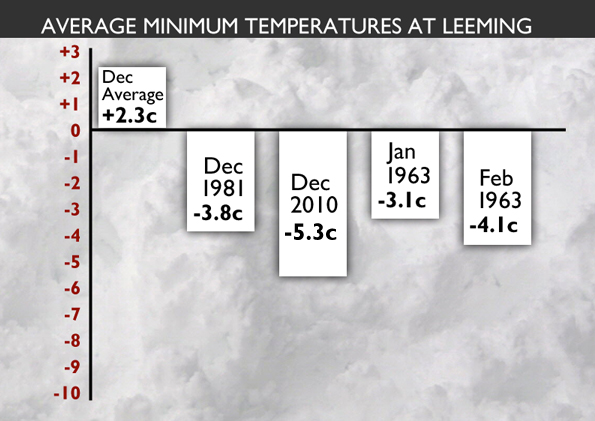 It gives a graphic illustration of just how cold the last few weeks have been. It's safe to say that so far this winter has been unprecedented.

The longest data set in the world is the Central England Temperature data set (CET) which allows us to look back all the way to 1659. The diagram below shows the coldest Decembers by rank. 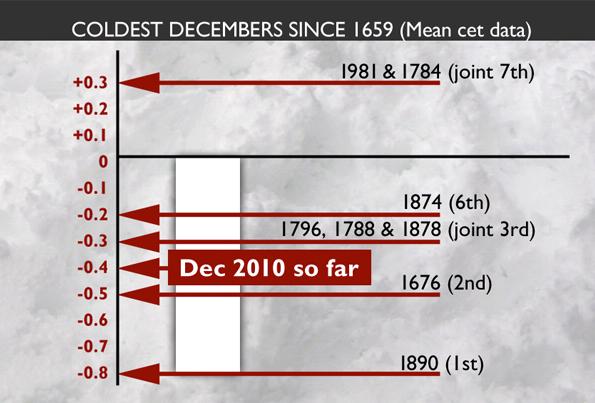 But with some models trending milder in the period from Christmas to New Year, it's probably safer to say that December 2010 is likely to be the 7th coldest December since records began in 1659, and the coldest since 1890 (itself the coldest on record), beating the coldest December of the last century, which was 1981 with a CET of +0.3C.

Weatherwise, another intense frost is expected tonight with -14C likely at Topcliffe in North Yorkshire. From Wednesday through to Christmas Eve a northeasterly wind will increase cloud and bring the risk of snow showers especially to eastern areas.

Temperatures will recover a little, especially close to the coast, but CET mean temperatures are unlikely to get much above 0C.

The latest American and midnight European operational models bring milder air in from the west during the second half of next weekend, bringing with it the risk of disruptive snow, followed by near normal temperatures next week.

The latest UK Met Office model is very similar. Other solutions I've seen in the last 24 hours, including the midnight run of the UK Met Office, keep a blocking high pressure across the country next weekend, which prevents milder air making any inroads.

Past history shows that models are often too fast in displacing entrenched cold air with milder Atlantic air, and so on balance the best estimate would be for a slow transition to milder conditions from the end of next weekend and into early next week, with a risk initially of further snowfall especially across eastern Britain.

This is the third winter running when we have had very cold and snowy conditions hitting the UK. It comes at a time of continued, unusually weak, solar activity.

In my blog 'could the sun cast a shadow on global temperatures' I wrote about how Australian scientist David Archibald was convinced that prolonged weak solar activity could mean much colder winters in future. He wrote his paper in February 2009.

Perhaps we all need to get used to colder winters across the UK in the next few years.