Nothing seems to have changed since I've been away for February half term. The UK is still in a battle ground with milder air trying to force its way northwards, bumping up against colder air, with more snow likely in places tonight. And the battle looks set to continue into the first week of March, with cold air persisting in the north of the UK, with milder air to the south - with areas in-between, particularly over the hills, prone to further snow.

A feature of this winter has been the unusual position of the jet stream. For the last week or so it has once again positioned itself through Spain and Portugal, North Africa and the Mediterranean and is the reason for the violent storms in Madeira that led to the incredible flash floods that most of you will have seen on TV.

Earlier this month I wrote about January being the warmest on satellite record. The picture below highlights beautifully that despite some areas of the world, including Europe and parts of the USA, experiencing much colder weather than normal, other parts, particularly more polar regions including Canada and Greenland, have experienced abnormal warmth, all part and parcel of the unusual weather patterns we have experienced globally this winter. 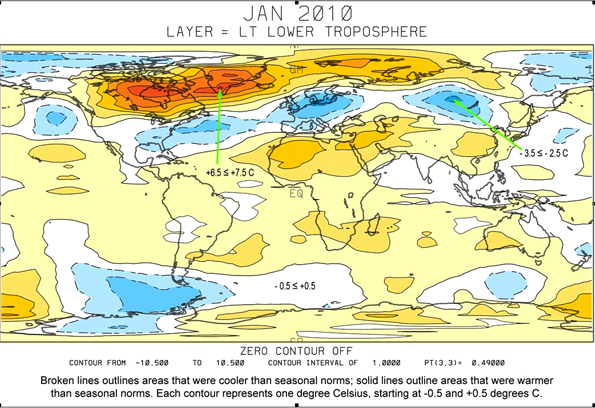 Also, I thought you might be interested in this; while I was away on holiday Roger Harrabin, the BBC's environment analyst interviewed Professor Phil Jones who is director of the Climatic Research Unit (CRU) at the University of East Anglia (UEA). The article is in the form of a question and answers session and can be read in full by clicking here. Some of the questions echo some of your comments when I wrote about the UEA on this blog recently.

Finally It's going to be a close run thing - but with only one week left of winter (winter being classified climatologically as Dec, Jan and Feb) - there's a chance that it will turn out to be the coldest winter based on the central England temperature range (CET) since 1978/79, although there is also a chance it may only be the coldest since 1981/82, depending on how far north milder air pushes this week. I'll be doing a review of this winter's statistics as soon as I have them to hand.