I thought it would be a good idea as we enter a new decade to collect together as many global temperature predictions as possible, some from big famous institutions, others from much less well known scientists, with a pledge to re-visit these predictions in time, to establish some kind of accountability - something I feel that has been lacking.

I think you will notice a definite divergence in the forecasts below, between the majority (those institutions and scientists who believe greenhouse gases are primarily driving global temperatures), and sceptical scientists, in a minority (who think natural mechanisms affect temperatures the most).

This calendar decade has been the warmest on instrumental record (although technically the 10 years to 2007 were the warmest 'decade'). However, although temperatures have remained elevated, the rate of global warming has clearly slowed. Put another way, temperatures have plateaued, at elevated levels, throughout the decade, and have not continued to rise, according to the HADCRUT data set.

So let's start by having a look at how the Met Office has done over the last few years. It's a mixed picture.

Back in January 2007 the Met Office, with the Climate Research Unit at the University of East Anglia, made a prediction about 2007 being the hottest on record, which proved incorrect.

2008 was then the coolest year of the new millennium, which was correctly forecast by the Met Office.

There were no such predictions that I could find for 2009, but they are certainly very clear about what the next few years will bring: Record breaking global temperatures. And it's easy to see why they think this may be the case. The developing El Nino in the Pacific will undoubtedly give global temperatures a push. This coincides with the start of the new solar cycle, and however weak that may be, should in theory add extra energy to the planet, and you would expect this to be reflected in predictions since the variations in the 11 year solar cycle is to a certain extent included in the model (although scientists at the Hadley centre believe these variations to be small) 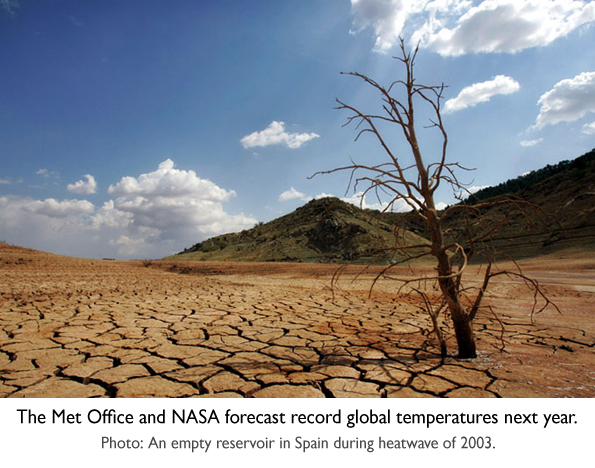 Lets now have a look in more detail at the forecasts on offer as 2009 draws to a close, based on the current record set in 1998 using HADCRUT data, with a global anomaly of +0.515C.

There are bound to be other forecasts, please feel free to post if you are aware of any.

A more recent press release issued during the Copenhagen climate conference said next year is 'very likely' to be the hottest year on record.

This is part of a new forecast for 2009-2019 which shows a range of possible outcomes for each year but the "central estimate" for 2010 shows a figure of about 0.55C above the average - clearly in excess of 1998. The temperatures then steadily climb to a high of about 0.7C above the average by 2015.

2) NASA: Their most recent predictions (early 2009) have been used in the absence of anything new. But effectively it's the same as the Met office, in that a new global record is expected next year.

The Middle ground - More warming due to greenhouse gases, but a possibility that natural cycles could mask this in the next decade leading to flat lining temperatures:

1) Dr Latif (Kiel University). There are bound to be others but this is the only example that comes to mind.

The Minority - No more rises, or cooling:

This is very interesting in that most of them seem to be a variation around a central theme. Weakening solar cycles leading to cooling, possibly linked to the pacific decadel oscillation. Most have already been mentioned in my previous blogs, on the whole their conclusions are no more warming (relative to record set in 1998), with cooling possible at least until 2030. 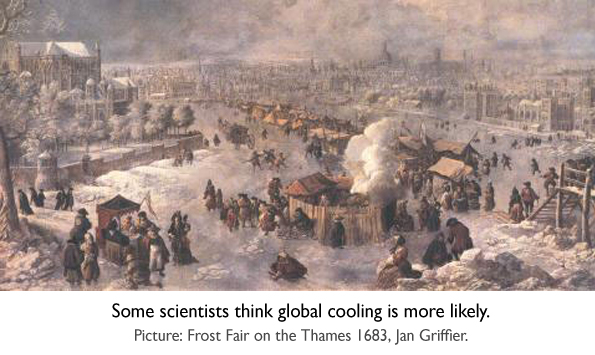 So here are a couple of new ones for you to digest over Christmas.

1) Dr Abdussamatov, Head of Space research laboratory, Russia: World temperature to oscillate around maximum that has been achieved until beginning of 2013 and then decline as the sun heads towards a Maunder minima as part of the 200 year bicentennial cycle.

It is clearly going to be a fascinating few years, and not everyone can be right.

Happy Christmas and a prosperous new year to all readers of my new blog and thank you for all your wonderful, interesting and thought provoking contributions. Most importantly, its nice to see such a good debate going on!