Swansea - an asset to the Premier League

Their style of play, their fascinating manager, the noisy fans at their atmospheric stadium and the dignity with which they seem to go about their business - there is much to suggest that Swansea will be a welcome addition to the Premier League.

The Swans became the first Welsh side to reach the top flight in the Premier League era when they defeated Reading 4-2 in a pulsating Championship play-off final at Wembley on Monday afternoon.

They almost went out of business nine years ago and were a League Two club until 2005 but their incredible journey means that they can now look forward to rubbing shoulders as equals with the likes of Manchester United, Liverpool, Arsenal and Chelsea.

"It means everything," said central defender Ashley Williams. "All of our lives will change now, we can say we are Premier league players and ultimately that is what we have wanted since we were little kids playing out on the park."

The promotion is a personal triumph for manager Brendan Rodgers, who was rumoured to be the fourth choice appointment when he took over at the club last summer. 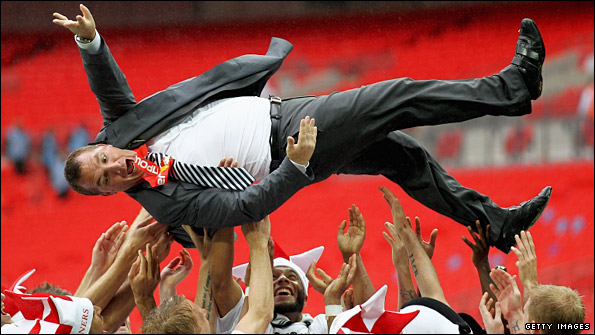 Brendan Rodgers was given Guardiola-style bumps by his team-mates

He had lasted just five months in his previous role as manager of Reading before he was sacked in December 2009 but he has rebuilt his reputation after taking the Welsh club into the top flight at the end of his first season in charge.

He is an intelligent and thoughtful man. His answers are interesting and veer away from the path so often trodden when someone talks about football. After his team defeated Nottingham Forest in their second leg of their play-off semi-final, he said that Swansea's opening goal had given his players "the peace of mind" to play their football. I thought it was an interesting and unusual turn of phrase.

He was clearly burnt by his experience at Reading and claims he learnt that none of his footballing decisions can be influenced by sentiment, sticking with players when he should be ruthless. Yet he is also an emotional man. As he explained why he looked towards the sky after his team's victory at Wembley, he was obviously thinking about his late mother and his eyes started to well up.

"I have had a wonderful journey up until now," said the 38-year-old Irishman, who hung up his boots at the age of 20 after concluding he would never be able to fulfil his ambitions as a player. "This promotion will take it into a totally different stratosphere."

Rodgers, who has also managed Watford, was head-hunted by Jose Mourinho to become reserve manager at Chelsea during his first spell as a coach at Reading. He no longer entertains questions about his close relationship with Mourinho, stressing instead that he has done enough to be regarded as his own man.

After Monday's victory surely nobody could deny him that, yet at one point at Wembley it looked as though his team's top-flight aspirations were about to unravel in the most spectacular fashion. They led 3-0 at half-time but huge credit must go to the Royals for the manner in which they stormed back into the contest, scoring twice in eight minutes to turn what was shaping up to be something of an anti-climax into a thrilling contest.

"If we scored the third goal - and I thought we had when Jem Karacan hit the post, then I thought we would go on to win the match," said Royals manager Brian McDermott.

Scott Sinclair finally killed off the contest 10 minutes from full-time when he struck his second penalty of the afternoon, in the process becoming the first player since Charlton's Clive Mendonca in 1998 to score a hat-trick in this fixture.

"The footballing gods were with us today but on what we have done this season we deserve to play in the most competitive league in the world," added Rodgers.

Swansea are patient and probing with the ball, searching out space in a way that has increasingly seen them compared with Barcelona. They play from the back and have blistering pace in wide areas in Sinclair and Nathan Dyer, the club's player of the season. The have ball-playing options in midfield, with Darren Pratley, Joe Allen, Leon Britton and Stephen Dobbie all comfortable in possession.

"I like to think we have done it with bravery," added Williams. "It takes brave people to play the way we did all season and not change at all. In the final we did not do it as well as we can but we tried to get on the ball and pass it."

Swansea's desire to attack will see them compared with Blackpool, who won many friends last season but ended it relegated. However, they have more defensive solidity than Ian Holloway's team. They conceded just 11 goals in their 23 home league fixtures and had the best home form in the division.

Rodgers took over at a club that already had a way of playing but, as with each new manager at Barcelona, he has added his own slant to an established method. Rodgers feels that what he has done is make the team more aggressive in their defending.

Some of their defenders, such as Alan Tate and Garry Monk, have now climbed through all four divisions with the club. They are part of the identity that Rodgers is keen to stress is vital to the club. Yet Rodgers is also very aware of the importance of strengthening his squad over the summer.

"It could be a big mistake if we try to do it with all the same players," said the Swans boss, who feared a player exodus if his team had lost. "It is about building. I spent four-and-a-half years on the coaching staff at Chelsea and I know what is needed.

"We will look to be attacking next season but to do it with defensive discipline. It is absolutely vital for us next season that we are able to defend properly."

There will be plenty of tough times for Swansea, as there are for all clubs trying to get to grips with the rigours of the top flight. But there is a dignity and class about them that will stand them in good stead.

After their victory on Monday all of the players put on T-shirts bearing the image of Besian Idrizaj, the Swansea striker who died suddenly in his sleep last May aged 22. 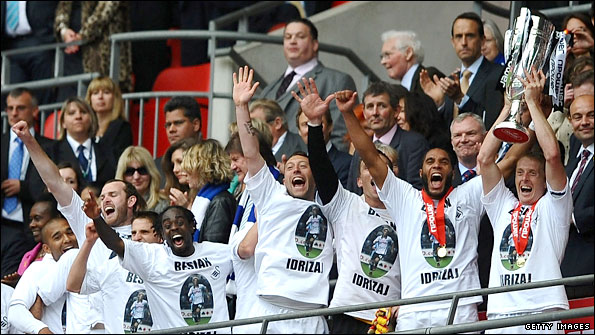 "With his family watching on television it was important that we showed that we are still thinking of him," said Monk. "Dorus De Vries got a text from his brother that he read out on way to the ground and we talked about him in the huddle.

"A lot of times in this world you are just a number but he was a friend and a team mate."

Swansea can expect committed and loyal support from their fans next season. The atmosphere at a packed Liberty Stadium for the match against Forest was sensational and Rodgers regularly talks about the passion and hostility of the fans.

Monk added: "When you walk around Swansea you do not see Manchester United or Liverpool shirts. All the locals are brought up to support Swansea and that is a massive factor."

Rodgers and some of his players have hinted this season that they feel Swansea is regarded as something of an outpost, a place that easily falls off the radar.

"Some people think that Wales stops at Cardiff," added Rodgers. "But when you come to Swansea you find a wonderful city and one of the most beautiful areas in the world."

Worry no longer. Now that Swansea have reached the Premier League, they are most definitely on the map.