I recently posed a question on Twitter to find out who you thought was the young player in the Football League most likely to attract offers from a Premier League club during the January transfer window.

Alex Oxlade-Chamberlain, Southampton's prodigiously talented and very fast winger, also generated several replies. The 17-year-old, a regular for his club this season, is the subject of much speculation, with clubs such as Arsenal, Liverpool, Tottenham and Fulham all linked with the teenager, who has been at Saints since the age of seven.

Former Saints players Gareth Bale and Theo Walcott have already made the move to a top Premier League side but Southampton manager Nigel Adkins has already made it clear that his club do not need to sell Oxlade-Chamberlain, who has apparently told his boss that he has no interest in leaving anyway.

If Oxlade-Chamberlain has been talked about for some time, then Jennings, who turned 18 four days before Christmas, has come out of relative obscurity this season. He has made only 19 first-team appearances for the League One club after his debut as a substitute against Charlton in September 2010. However, since then his performances have swiftly brought him to the attention of numerous Premier League and Championship sides.

Scouts from Everton, West Brom, Sunderland, Fulham and Watford were all spotted at Tranmere's match against Plymouth on 13 November. What they saw was a serious contender for goal of the season.

Jennings picked the ball up close to the left touchline 10 yards inside the Pilgrims half.

He accelerated beyond right-back Karl Duguid, surged into the Plymouth penalty area and eluded four more players as he cut inside before striking home from a central position 12 yards out. I have watched the goal numerous times and what really strikes me is the fear and panic created by the speed of Jennings. His first touch is slightly heavy but his pace allows him to retrieve the situation. After that, his control is immaculate and the opposition are clearly scared to touch him for fear of conceding a penalty.

"Usually players at our level are here because they have got something missing," Tranmere manager Les Parry told me. "Normally, if they are like lightning then their ball skills are lacking a little bit but Dale is quick and clever, while his ball control is brilliant."

Jennings can use both feet well but normally plays on the left side of a front three. He scored twice in the 4-2 win over MK Dons in October but Parry reckons his debut goal, the winner at Bristol Rovers in late September, is his best so far. Tranmere went into the fixture bottom of the table and with an injury list that forced Parry into fielding players he thought "should have been doing their homework".

Jennings was arguably one of those but he settled the contest with a blistering left-footed strike from 20 yards after creating the space to shoot with a deft turn.

"We knew he would be in our first team at some stage this season so we gave him a squad number at the beginning of the campaign," added Parry of Jennings, who wears the number 21 shirt. "But because of injuries he got his chance a bit earlier than anybody expected - and he has taken it, scoring some spectacular goals."

Parry readily acknowledges that Jennings is aware of the increasing number of scouts that follow him from game to game.

"There are no secrets in football," said the Rovers boss. "You think there are but the truth is there aren't. Dale has got an adviser so he will be told that people are watching him, even if he only finds out after the event."

Jennings joined the Tranmere youth system after he was released by Liverpool, starting the current season as a second-year scholar. Rovers had the good sense to offer him a professional contract in October, signing him up until the summer of 2012.

Rovers have received informal enquiries about Jennings but Parry is adamant the club are in solid financial shape and will not listen to silly offers for a player they feel has a very bright future. 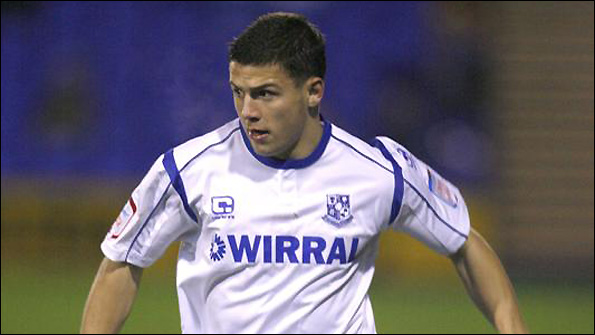 "We have not got the bank banging on our door and we are not in court with the taxman after us," added Parry. "That helps to reduce the need to sell and increases the price of any of our players that another club wants to buy."

The big issue for a player like Jennings is whether it would be wise for him to leave Tranmere at such an early point in his career. His predicament reminds me of something Watford manager Malky Mackay recently told me when discussing his own club's attempts to hang on to their talented young players.

"If you go to a Premier League club at the age of 16 or 17, there might be 50 players between you and a first-team jersey," said Mackay. "I ask youngsters to think whether it would be better to leave the club when they are 20 and already have several years of first-team experience."

John Bostock became the youngest person to play for Crystal Palace when he made his debut at the age of 15 years, 287 days in October 2007. He was regarded as hugely talented and was controversially signed by Tottenham the following summer. He is almost 19 now and nowhere near the first team at Spurs, for whom he has yet to make his debut. Instead, he is on loan at Hull. From a purely footballing perspective, would it not have better for him to stay at Palace for longer?

I get the impression that Parry knows Jennings will eventually leave Prenton Park if he is to fulfil his potential. Managing that point of departure is crucial to all concerned.

"It is not an easy situation for both parent club and the player," stated Parry. "The player wants to better himself and sometimes it is only with hindsight that you realise that the decision you make may not have been the right one.

"It is the same with our youth players who are 14 and 15. I ask their parents to look at our record of bringing them through to the first team compared to Premier League sides. But, at the end of the day, parents would rather be outside the school gates saying my lad plays for Man Utd than Tranmere. It is the same sometimes when youngsters become professionals - they think about the big club and do not look at the bigger picture."

If a club did make a big offer that Rovers would be foolish to refuse, then the League One side would explore the possibility of immediately signing Jennings back on loan - as Rochdale did after selling Craig Dawson to West Bromwich Albion. The defender was signed by Dale from Unibond League outfit Radcliffe Borough and was a key component of the side that won promotion from League Two last season. He signed for West Brom on 31 August but was immediately loaned back to Rochdale for the current campaign.

"Rochdale manager Keith Hill has got his head screwed on," said Parry. "So have West Brom, who realised Dawson would play regular football and reap the benefits."

Parry's initial concern in this January transfer window was replacing goalkeeper Gunnar Nielsen, whose loan spell from Manchester City expired early in the month. Parry has since plugged that gap by bringing in veteran Tony Warner, as well as signing defender Michael Kay on loan from Sunderland to fill the injury-hit right-back position.

Parry would be very happy for January to pass without any mention of Jennings but I'm not sure he thinks there is much chance of that.

I just hope that Jennings does not disappear into the abyss of a huge squad, where he is unable to develop and refine his gifts.