There is not much common ground between supporters of Lancashire rivals Burnley and Preston but they were united in their mutual disillusion on Tuesday afternoon.

The Clarets fans, desperate for an immediate return to the Premier League, saw their team outplayed as they suffered a 2-0 reverse against struggling Scunthorpe at Turf Moor. It was no better at Deepdale, where North End supporters watched their team surrender a 1-0 lead as they went down 3-1 against Championship relegation rivals Middlesbrough.

The final whistle at both grounds brought with it the sound of booing - and within 24 hours both Brian Laws at Burnley and then Preston boss Darren Ferguson had been sacked.

Let's start with Burnley. Laws was asked to stand down in a telephone conversation with chairman Barry Kilby, who is currently out of the country.

Laws was in charge at Turf Moor for less than a year. He was sacked by Sheffield Wednesday, then a struggling Championship side, on 13 December 2009 and walked into Burnley to become a Premier League boss for the first time on 13 January 2010

I said in a blog at the time that it was a great appointment for Laws. Not many managers land a Premier League job after a failure in the Championship. Kilby claimed to have been impressed by the former Burnley player's passion and demeanour, as well as his relative success on modest budgets at previous clubs Scunthorpe and Wednesday. 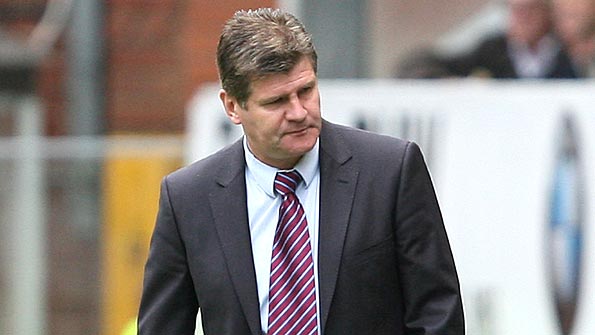 I have met Kilby a few times and believe him to be an honest and thoughtful man who clearly cares deeply about his hometown club. He is not the type to take a significant decision like this without some serious soul searching. After all, to sack Laws is to admit a failure of his own as much as the manager.

Laws could not keep Burnley in the Premier League but that was hardly unexpected. He could argue that his team had won three of their last six Championship fixtures but each victory was followed by defeat and, taking a broader perspective, Burnley have won just three of their last 10 matches.

They are only two points adrift of the top six but they are eight short of automatic promotion and 15 behind leaders QPR. And, to be frank, they are a side that lack the verve, self-belief and momentum that was generated under predecessor Owen Coyle.

You only have to look at the current position of Bolton - sixth in the Premier League - to understand that the hyperactive Coyle is a very good manager. He took the Clarets to the Premier League via the play-offs at the end of the 2008/09 season, during which the Lancashire club also enjoyed success in both the FA Cup and Carling Cup.

His team played a 4-3-3 system and made many friends with their ability to shock top-flight opponents. It was always going to be an extremely hard act to follow, particularly for a manager with no Premier League experience.

Some said at the time that the appointment of Laws was an admission by the club that they were heading straight back down to the Championship. That was unfair but there is no doubt that Kilby now faces a very important decision. His team are far from out of promotion contention and have 24 games left to reignite a campaign that has rarely looked convincing.

Of course, these things are relative and every sane Preston fan would happily swap league positions with Burnley.

North End started Tuesday two points from safety but after their reverse against Boro are now five points shy of the fourth from bottom club. And when you have won just five games from your 22 league fixtures, then five points is a very substantial margin.

I spoke to a North End season ticket holder earlier on Wednesday. He had accepted the inevitability of relegation. They have had the look of a doomed team for quite some time.

Preston have had some spectacular results this season - notably the 6-4 win at Leeds after trailing 4-1 - but they have won one of their last nine fixtures and have kept only three clean sheets in 22 Championship matches.

Several times in recent weeks I heard journalists ask Ferguson if he was the right man to manage North End. He always insisted that he was but I never heard him explain how he was going to turn around the fortunes of the club or eradicate the individual errors that he felt undermined his team's campaign.

Ferguson often said after a victory that he hoped his team had turned a corner. There was a slight hint of desperation about his words, as though he was powerless to alter the situation. 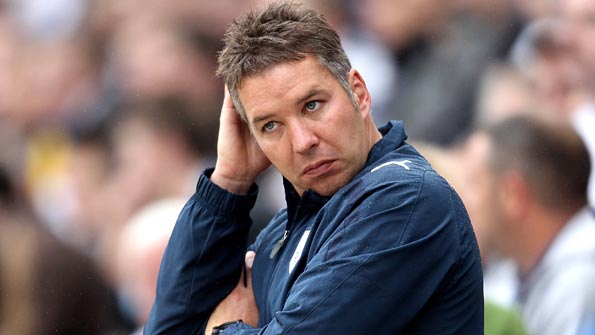 Ferguson has been powerless to halt Preston's slide towards League One. Photo: Getty

At no point did he give the impression that he knew his best starting XI and the recent loan arrivals of Danny Pugh and Michael Tonge from Stoke, as well as Leon Cort from Burnley and Ritchie de Laet from Manchester United, has not brought about an improvement in form.

Ferguson's dismissal comes exactly one year to the day that Alan Irvine was sacked as North End boss. Irvine, currently in charge of Sheffield Wednesday, was dismissed with his team 16th in the Championship table - a position that now seems beyond North End.

Ferguson arrived having guided Peterborough to back-to-back promotions but he was sacked just 16 games into his first campaign as a Championship manager at Posh, with the club bottom of the table and four points adrift of safety.

His appointment at Preston was a chance for the son of Manchester United manager Sir Alex to prove that he can cut it in the second tier. The facts suggest that he cannot, although, a little like Laws at Burnley, it could be argued that he took the right job at the wrong time.

No club has been in the Championship longer than Preston, who in a decade of second-tier football have twice reached the play-off final and spent far more time dreaming of the promised land of the Premier League than worrying about slipping into the third tier.

However, Ferguson's tenure coincided with a period of frugality at Deepdale. Trevor Hemmings, a local lad and extremely wealthy after a life-time of business success, had made up a financial shortfall for a considerable period of time in the form of loans.

This year, he took over at the club, taking them off the Alternative Investment Market and back into private ownership. He brought in veteran rugby league administrator Maurice Lindsay as chairman and a period of cost-cutting and belt-tightening has been the story of 2010.

Ferguson was given a degree of latitude to wheel and deal in the transfer market but the priority at the club was to loan out or, preferably, sell the high earners on the playing staff.

The manager had always shied away from seeking the help of his father in the transfer market at Posh, but there are currently three United players - De Laet, Joshua King and Matt James - on loan at Preston.

North End have enjoyed a fruitful relationship with United over the last 15 years - David Beckham made his league debut in a North End shirt - and it will be interesting to see whether that continues now that Preston have sacked Sir Alex's son.

Ferguson senior was in the stands at Deepdale as Preston won their last game under Darren, a 1-0 defeat of Roy Keane's Ipswich on 11 December. There were less than 10,000 at Deepdale for that fixture and the United manager must surely have noticed the apathy that has so disturbingly taken hold amongst the majority of the supporters this season. The atmosphere at Deepdale has often been desperately poor.

If Kilby at Burnley needs to find the right man to spark their promotion campaign, then the decision makers at Preston also face a crucial decision. If North End are to avoid relegation to League One they need to scrap for every available point and work out how to keep clean sheets - three all season simply isn't good enough.

Prior to Wednesday's double dismissal, I do not think many Burnley fans felt their team were heading up, nor many Preston supporters believed their teams were staying up.

Two very, very important decisions could change all of that.