At the Ricoh Arena.

Norwich City manager Paul Lambert is refusing to discuss the prospect of his team winning promotion. Instead, he answers every question about his team's lofty position by stating that he is simply focused on securing enough points to avoid relegation.

In stark contrast, Coventry boss Aidy Boothroyd has recently been talking in terms of his team not only remaining in the top six but keeping the pressure on the top two.

Their words perhaps reflect their different personalities more than the relative prospects of their club's ending the season celebrating promotion.

Lambert is a cagey Scot, committed and passionate but careful with his words. He does not elaborate with his answers when a short and crisp reply will suffice.

Boothroyd is affable, witty and extraordinarily positive and upbeat. He is prone to management speak - 'possible impossibles' being one such example - but it is difficult not to like a man who is happy to discuss his team with great passion.

Their sides met at a cold and snowy Ricoh Arena on Saturday, with Norwich's deserved 2-1 victory ensuring that they moved above Coventry and into fifth place in the Championship. 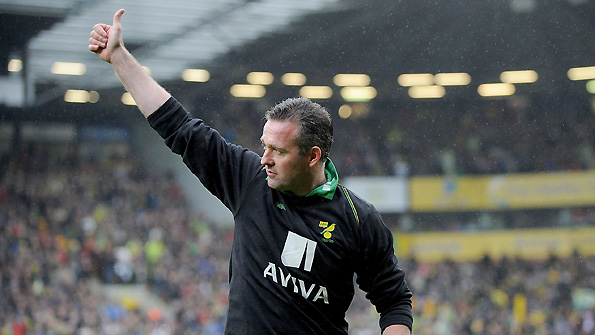 I have seen Norwich several times since Lambert succeeded Bryan Gunn as boss in August 2009 and have always been impressed by their style and desire. They won the League One title last season and, after a summer of shrewd recruitment with the likes of Andrew Surman, David Fox and former Coventry defender Elliot Ward arriving at Carrow Road, Norwich have adjusted well to life in the Championship.

They have not lost back-to-back matches under Lambert and are currently on a run of just one defeat in their last eight fixtures. They showed a clinical streak in defeating local rivals Ipswich 4-1 in their recent meeting and were patient and composed against Coventry on Saturday. Their bold 4-3-3 formation against the in-form Sky Blues showed they have the confidence to try to win tricky away games rather than play for a point and in Arsenal loanee Henri Lansbury they possess a midfielder with the ability to prise open the opposition.

The key man for Norwich is clearly striker Grant Holt, who has become something of a talisman for the Canaries. Their 2-0 defeat at the hands of Portsmouth last weekend was the first time Norwich had failed to score since mid-October. Holt, who scored 30 goals last season, was suspended for that fixture, but returned to score both of his team's goals at Coventry.

"He has been brilliant for me from day one," said Lambert of the 29-year-old former Nottingham Forest striker. "He is an old style number nine and there are not many of those about."

Norwich are now two points off Leeds in second place and if you press Lambert on the subject of his team staying the distance, it becomes obvious that his ambitions stretch far beyond avoiding the drop this season.

"I have my own thoughts and the lads know what I think," added the Scot, who won the 1997 Champions League final with Borussia Dortmund and collected numerous titles during a lengthy spell at Celtic.

"I have been in some really good dressing rooms at certain times in my career but the one here is as good as any."

Without doubt, Norwich are a club on an upward trajectory but Lambert points to an injury list that includes Adam Drury, Steven Smith, Zak Whitbread, Surman and Matt Gill as he attempts to douse expectations.

Boothroyd is not an individual who is prone to playing down a situation and his breezy outlook is proving to be a neat fit at a club in desperate need of some good news. The Sky Blues have been rattling around the lower reaches of the Championship since their 34-year tenure in the top flight ended in 2001.Coventry flirted with administration in 2007 and narrowly avoided the drop in 2008. They have finished higher than 10th ONLY once since they dropped out of the Premier League.

However, Boothroyd appears to have built a renewed sense of spirit and belief since arriving after walking out on Colchester in May. I canvassed the opinion of supporters on 606 and they were generous in their praise of the Yorkshireman. Jon_Covfan said that the manager had "instilled a confidence and never-say-die attitude that had been missing for years", while Scamalot added: "I was not sure when he was appointed but he is trying to build a feeling of family and togetherness." 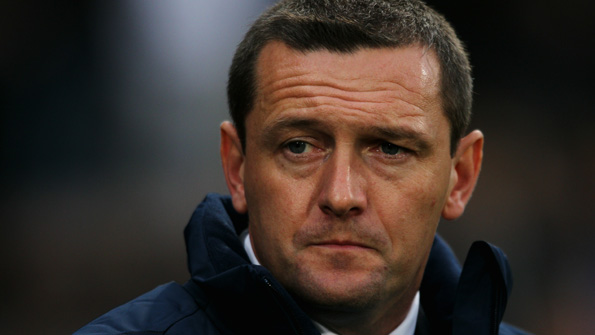 Boothroyd was appointed Coventry manager in May. Photo: Getty Images

One of Boothroyd's shrewdest signings has beenthe capture of midfielder Lee Carsley after he was released by Birmingham City. Carsley, a former Coventry player, won promotion from the Championship with Blues in 2008 and has brought experience and wisdom to the team. His absence through suspension on Saturday was a big loss.

"I have been really impressed with the manager," said Carsley of Boothroyd. "He is energetic and his up-and-at-em enthusiasm rubs off on people. I think he is what the club needed and his knowledge and organisation is very good."

Carsley told me that Boothroyd had worked extremely hard on the training ground to familiarise his players with the style of play that proved so successful at Watford, who won promotion to the Premier League in 2006. Boothroyd's teams often bypass the midfield with long passes towards the strikers. The theory is that his attacking players are then brought into the game by knock-downs from the target men.

It is a style of play that has seen his detractors nickname him Aidy Hoofroyd. Burnley defender Clarke Carlisle wrote on his blog after his team's recent match against Coventry: "When you are playing against Aidy Boothroyd's style of play it feels so anti-football."

Boothroyd's style was evident again on Saturday, as his players constantly sought out the physically imposing strike duo of Clive Platt and Marlon King. However, the home team's failure to retain possession and build pressure reminded me of something else that Carlsey told me.

"The gaffer wants to attack and get the ball forward," added Carsley. "But I think he would be the first to say that once we are in the final third our quality has to be better. I think that is what we are lacking at the moment."

It would be harsh to judge Coventry too much on the basis of Saturday's performance because they played most of the game with 10 men following the dismissal of Aron Gunnarsson after 36 minutes. Boothroyd was typically upbeat afterwards, insisting that he had been pleased with the dogged and rugged qualities that helped Coventry briefly level the scores at 1-1 through a crisp King strike.

What did concern him was the defending. Regardless of what you think of Coventry's style of play - and I get the impression that many of the club's supporters are willing to forgo direct tactics if it brings some long-awaited success - there is no doubt that their defending has been excellent. Keiren Westwood is a very talented keeper and the team had kept four clean sheets prior to Saturday. However, both Norwich goals came after Holt had been left unmarked in dangerous areas and Boothroyd was left to lament the basic errors that he works so hard on the training ground to eradicate.

Coventry now face testing games against Cardiff and QPR but Boothroyd insisted his team go into the festive fixtures with an over-riding mood of optimism. Lambert was more circumspect as he looked towards a busy period that will see his side play four games in nine days.

The contrast in styles of their teams would make for an interesting boxing match; Coventry direct and powerful, capable of a knockout blow, while Norwich bob and weave as they attempt to find a flaw in the opposition defence.

And in a season when it is looking increasingly likely that there are no stand-out sides in the Championship, it would be not be a huge surprise if one of them was still standing come the end of the campaign.