England went into Wednesday's friendly against Hungary braced for a rough ride but determined to eradicate the lingering disappointment of their World Cup campaign.

On balance, I thought they delivered a performance that provided cautious reasons for optimism as Fabio Capello and his team switch their focus towards the forthcoming Euro 2012 qualifying campaign.

A different formation, a few new faces and a positive attitude were all evident as England recovered from the shock of falling behind after 62 minutes to win 2-1 thanks to goals from skipper Steven Gerrard.

The most encouraging aspect was the attacking play during the opening half hour at Wembley as Capello's team appeared to relish a more sophisticated system than the 4-4-2 that looked so limited and antiquated in South Africa.

What we saw could be described as 4-3-3, with Frank Lampard, Gareth Barry and Steven Gerrard in midfield, Theo Walcott and Adam Johnson providing the width and Wayne Rooney operating as a lone striker. Gerrard and Lampard showed a willingness to support Rooney, while Barry tended to sit in front of the back four.

With full-backs Glen Johnson and Ashley Cole supporting the youthful exuberance of Walcott and Adam Johnson, it ensured that England played with plenty of pace and width.

England moved the ball quickly but accurately, frequently cutting open Hungary with the sort of crisp one-touch moves that were conspicuous by their absence in South Africa.

"I tried to play a new style," said Capello. "It was not easy because Hungary was always defending but I thought that we were good for the first 30 minutes."

Of course, it must be noted that England did not manage to score until after the interval. They switched back to a 4-4-2 formation at the break, while the shape changed again after Rooney was withdrawn and replaced by James Milner.

Capello opted to start with seven of the team humbled by Germany in Bloemfontein - and it had been widely expected that supporters would voice their World Cup dissatisfaction by booing the players.

But England undoubtedly received much more support than criticism. Cole and John Terry were jeered when they touched the ball in the early stages, while Rooney was booed as he left the field when he was substituted. The Manchester United forward responded by waving to the crowd, a much shrewder response than his tirade in Cape Town.

England were booed as they headed to their dressing room at the end of the goalless first half and again when Hungary scored but the 72,024 spectators inside Wembley responded positively to their team's comeback, with Gerrard receiving a standing ovation when he was replaced in the final minutes by Jack Wilshere.

Gerrard was a worthy man of the match, with his goals underlining his continued importance to the team. The first was a rasping long-range strike and the second a deft finish after a sharp turn had wrong-footed several opponents.

"I know I got carried away with my celebration when I scored the first goal but it showed what it means to play for England," said the Liverpool midfielder.

Gerrard made way for 18-year-old Wilshere, who became the 10th youngest international to play for England. The Arsenal midfielder was one of three players to make his senior debut, along with full-back Kieran Gibbs and striker Bobby Zamora. Defender Michael Dawson won his first cap as his appearance against the Platinum Stars in a World Cup warm-up campaign was not classed as a full international.

Gibbs looked assured at left-back, while Zamora, although hardly a novice at 29, played with commitment and desire. The Fulham striker almost marked his debut with a goal but his long-range strike flew narrowly over Gabor Kiraly's crossbar.

Goalkeeper Joe Hart, 23, was third choice in South Africa behind Robert Green and David James but started on Wednesday, pressing his case for a regular place by making an excellent late save to prevent Zoltan Gera equalising.

"We have to see new players for the future," added Capello, who picked out half-time substitute Ashley Young for praise after the Aston Villa winger's confident performance on the left-hand side of midfield. "I have to change things."

It is important to place Wednesday's victory in context, of course.

The game was a friendly that took place before the Premier League season has started. It featured several England players who still lack match fitness. And the opposition were ranked 62nd in the world, although, for a brief few minutes, it looked as though they might inflict a damaging defeat on their hosts. But a win is a win. 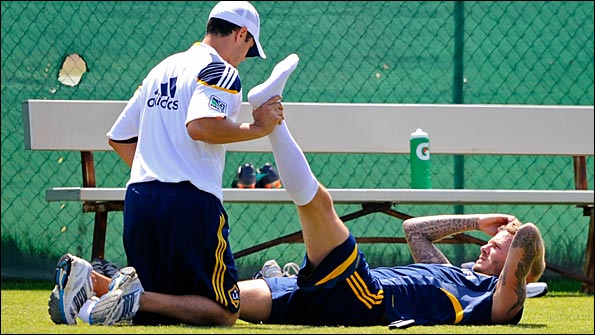 Beckham is back in training with LA Galaxy

There remain concerns, though. Rooney has not scored for England since the 5-1 win against Croatia in September 2009 and his form at international level is a major worry.

As for Capello's tarnished reputation, he is sure to take another battering after it emerged that he had not informed David Beckham that the 35-year-old was surplus to requirements before revealing the news in a television interview before Wednesday's game.

The England coach acknowledged afterwards that he did not expect the veteran of 115 caps to play another competitive game, although he hoped he would turn out in one final Wembley friendly to say farewell. But, whatever his faults, the fiercely patriotic Beckham deserved better than to find out second hand that his international career was over.

Beckham's future will no doubt overshadow events on the pitch but at least England have begun the long process of rehabilitation after events in South Africa.

As for restoring the public's faith in the team, what's your view?