Uruguay's madman with the ice-cool finish

Uruguay striker Sebastian Abreu emerged from his team's dressing room after their stunning penalty shoot-out victory over Ghana on Friday partially hidden behind the lens of a video camera.

Abreu, affectionately known as El Loco (the madman), has been shooting a film of his trip to South Africa and was determined to capture the joyous scenes after La Celeste ended a 40-year wait to reach the last four at the World Cup.

Yet there is no doubt that he himself had been centre stage. It was, after all, the 33-year-old's extraordinarily risky but breathtakingly bold penalty that sealed a semi-final tie against the Netherlands. 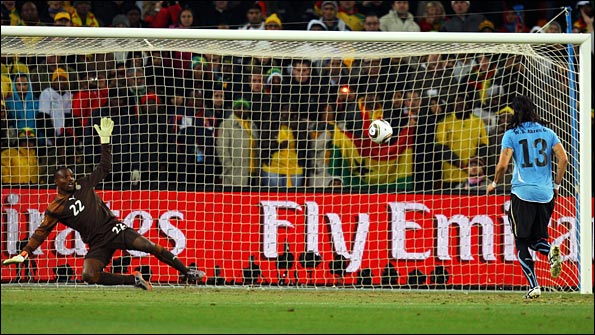 In Brazil, where the tall and long-haired Abreu plays his club football for Botafogo, the type of penalty he scored is known as a cavadinha, which roughly translates as a "little amount of digging".

This strikes me as an entirely appropriate description for a penalty kick that requires a player to place his foot under the ball and scoop it into the goal.

To succeed, the penalty taker must wait for the goalkeeper to commit himself before striking the ball down the middle with just enough velocity to ensure it loops gracefully into the net. It is confusing to watch because it seems to happen in slow motion.

Get it wrong, though, and you have a video nasty on your hands, as Leicester City's Yann Kermorgant found out when his botched attempt against Cardiff in a Championship play-off shoot-out last season left him cast as the villain of the piece.

"We're used to his crazy things, it's not the first time he's done that," said Uruguay skipper Diego Lugano of Abreu's strike. "It is quality but he's as mad as he is intelligent. He studies opponents and goalkeepers. He's brave and smart."

Abreu scored an identical penalty in a crucial Rio state championship match against Flamengo back in April and gambled on nobody from Ghana having noticed.

From what I have seen and heard about Abreu, he strikes me as a likeable and intriguing character, especially in a world when footballers can seem bland and devoid of personality.

Abreu's interest in filming is said to stem from a spell as a trainee journalist at school. His final assignment was to cover a basketball match and interview the star player.

The stand-out player turned out to be Abreu, who duly fulfilled his assignment by writing an article about himself.

Abreu has had a nomadic football career, which has taken him to 17 clubs across seven countries, but his popularity is undiminished at home.

In truth, there may be other strikers equally worthy of inclusion in the Uruguay squad but Abreu has a cohesive presence and is regarded as the captain without the armband.

Videos on youtube of Abreu appearing on Uruguayan TV suggest a man who is comfortable in front as well as behind the camera. It is easy to see why he is held in high regard.

That said, apart from his audacious penalty, I didn't think he was particularly effective after coming off the bench against Ghana.

He has a sound scoring record at international football, with 26 goals in 56 appearances coming into the World Cup. But as an old-fashioned target man with plenty of miles on the clock, he lacks mobility and I am not sure he will even start against the Netherlands.

The very fact that coach Oscar Tabarez has a selection decision to make is down to the suspension of Luis Suarez, who saw red for his already infamous handball in the dying seconds of extra-time against Ghana.

The Ajax striker's absence is a major blow for Uruguay, who have profited from arguably the most successful strike partnership in the tournament in Suarez and Diego Forlan.

They have scored six goals between them - three each - and are a key reason why a well-organised if largely unspectacular Uruguay team have remained on track as the road has narrowed at the World Cup.

Suarez arrived in South Africa after a domestic Dutch season that saw him score 49 goals in 48 games. 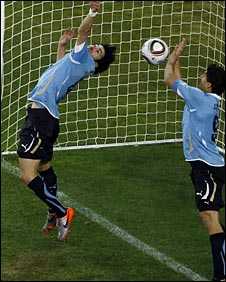 People doubted he could translate his form to the highest stage but Suarez has delivered in a competition where much-hyped stars such as Wayne Rooney, Fernando Torres, Didier Drogba, Cristiano Ronaldo and Lionel Messi struggled to find the net.

Forlan was a disappointment at Manchester United after the Premier League giants paid Argentine side Independiente £6.9m for his services in 2002. He required 27 games to get off the mark for the English club. Yet only this weekend, United's first-team coach, Rene Meulensteen, suggested Forlan would be welcomed back with open arms at Old Trafford.

The 31-year-old, who, along with Abreu, played at the 2002 World Cup, has subsequently proved his worth at both Villarreal and Atletico Madrid, with whom he won the Europa League last season after scoring both goals in the final against Fulham.

Forlan is an excellent foil for Suarez, who is extremely quick and able to profit from his fellow striker's intelligent use of the football. He is also the fulcrum of the Uruguay side, dropping deep to seek out the ball and orchestrating all the set pieces.

I have been very impressed in South Africa with his determination, deft touch and positional awareness. He is difficult to mark and always willing to shoot from distance.

It will be very difficult for Uruguay to defeat the Netherlands without half of their potent strike duo - and wily coach Tabarez must now decide who should start alongside Forlan.

If Arbeu is used as an impact player, expect either Palermo's Edison Cavani or Sebastian Fernandez of Argentine side Banfield to replace Suarez as both are quick and mobile.

"The semi-final will be a very tough game," Forlan told me. "The Netherlands have great players but it is a semi-final and we have to win."

It would be foolish to underestimate Uruguay, the only South American team to reach the last four. They might have needed a play-off victory over Costa Rica to qualify for South Africa but, having spent most of their stay here based next to the Big Hole in Kimberley, they have certainly hit a rich seam of form.

And they are looking to strike it rich in Cape Town on Tuesday.