I am struggling to remember a more dramatic end to a World Cup match than Friday's classic quarter-final tie between Uruguay and Ghana at Soccer City.

Luis Suarez's goal-line handball from Dominic Adiyiah in the dying seconds of extra-time saved a certain goal but resulted in a red card for the Ajax striker and a penalty that was, literally, the last kick of the game before the shoot-out.

Asamoah Gyan, scorer of two spot-kicks already in South Africa, stood just one strike of the football from taking an African team to the last four of the World Cup for the first time.

He had an entire continent behind him, willing him to score, but heartbreakingly for the 24-year-old, his strike skimmed the crossbar and flew into the stand behind the goal.

Moments after his miss the camera cut to Suarez, who had left the field in a state of despondency but was now overcome by sheer, unadulterated fist-pumping joy.

His gamble had paid off in spectacular style.

Sebastian Abreu then delivered a stunning coup de grace with an ice-cool looping penalty kick that took an age to reach the net. Stranded Black Stars goalkeeper Richard Kingson could only look on having already dived to his right.

Abreu, a journeyman of 17 clubs in seven countries, was mobbed by his jubilant team-mates but it was Suarez who had made the ultimate sacrifice.

Suarez explained afterwards that he knew he could not stop Adiyiah's effort with his head and so used his hand. The huge grin on his face as he spoke to reporters indicated in the clearest terms possible that he had no regrets about what he had done.

But was it clear-cut, blatant out-right cheating or professionalism that ought to be applauded? 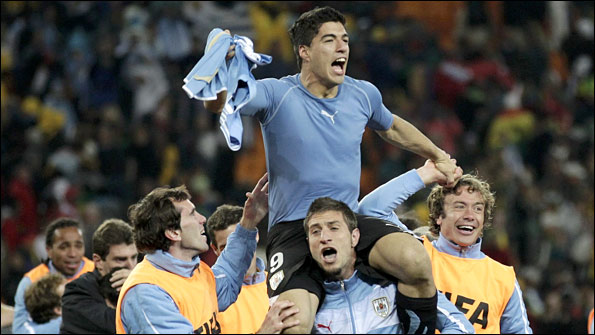 I heard several angry people describe it afterwards as the sort of despicable behaviour that needed to be stamped out.

"The referee should have awarded a goal," said understandably disappointed Ghana defender John Pantsil, although I personally don't see how Olegario Benquerenca could have given anything other than a penalty if the ball did not cross the line.

Panstil added: "There is no chance that any of us Ghana players would have used our hand to stop the ball - no way."

It is difficult not to have some sympathy for Pantsil and his team-mates. They had been the better side during extra-time and could not have come any closer to a dramatic winner.

The vast majority of the 84,017 inside Soccer City were behind them, while Milovan Rajevac's team had the support of the African continent in general.

"Go BaGhana" said Friday's headline in The Citizen newspaper, a neat play on Bafana Bafana, while The Times suggested "We Ghana win it".

At one point on Friday I even heard a chant of "Ghana, Ghana, Ghana" momentarily drown out the sound of the vuvuzela.

Ultimately Ghana's exploits in South Africa have ensured a measure of respectability for the continent after a disappointing group stage that saw the other five African teams fail to qualify.

They have a young side, with seven of the starting XI in Johannesburg 25 or under, and should have a bright future. Despite his agonising Friday, Gyan is a striker of real quality, while young holding midfielder Anthony Annan looks to be a player of immense promise.

The Black Stars became only the third African side after Cameroon and Senegal to reach the last eight and came within a whisker of a place in the last four - and did so without Michael Essien, their best player.

Uruguay were not so much trying to break new ground, as emulate past glories and the victory for Oscar Tabarez's team gave them their first semi-final place since 1970

The manner of La Celeste's progression might disgust some but that should not detract from their overall form in South Africa.

They have just conceded two goals in five games and for a country with a population of 3.5 million, reaching this stage of the competition is a stunning achievement.

I saw their opening game against France and must admit I wondered how they were going to enrich this tournament. They played three in the centre of defence, packed the midfield and lacked ambition.

I had underestimated them.

They had got the point they wanted against the group favourites and played a more expansive game against South Africa, winning 3-0, and have also gone on to defeat Mexico and South Korea.

Suarez and Forlan, who equalised against Ghana with a free-kick, have scored six goals at the World Cup.

They have perhaps been the most formidable strike partnership in the tournament and the absence of Ajax striker Suarez will be a major blow when they take on the Netherlands in Cape Town on Tuesday.

"It is a pity, he made a great save today," said a clearly delighted Forlan, who rated Friday as the greatest night of his career.

"Suarez is one of the heroes. He didn't score a goal but he saved one and now we are in the semi-final."

How Suarez's actions are interpreted is a matter of culture as well as perspective.

What might be regarded in Europe or Africa as cheating is seen as cunning or exploitation of the rules in other parts of the world.

It could be seen as a moral question or an issue of sportsmanship but, despite what Pantsil said, does anybody really think that professional players all over the world would not have done the same thing?

Suarez did what was required to keep his team in the contest - and there is no doubt that if Suarez had not handled the ball his team would now be reflecting on a defeat, not the high-point in Uruguayan football for 40 years.

"I thought we were out," said Forlan of the moment when Gyan prepared to take his penalty.

"I was convinced we were going home. When I saw the ball go into the stand it was unbelievable - Suarez saved us."