Miroslav Klose spent most of last season warming the bench at Bayern Munich - but here in South Africa he has been of crucial importance to Germany for the third World Cup in succession.

His brace against Argentina on Saturday took him to four goals in the current tournament and 14 overall, level with compatriot Gerd Muller and one behind Brazil's Ronaldo.

The 32-year-old is now just a good day at the office away from becoming the tournament's all-time leading goalscorer.

In an attempt to put this into perspective, the Polish-born Klose recently recalled a conversation he had with Ronaldo after the 2002 tournament.

The Brazilian had just whacked in eight goals, including a brace in the 2-0 final win over Germany - and Klose remembers thinking that he would never scale such heady heights.

"Two goals to go past his record - it is just crazy," said Klose after the 4-0 victory over Diego Maradona's team set up Wednesday's semi-final tie against Spain in Durban.

I suspect many people would agree with him.

He scored five goals at both the 2002 and 2006 World Cups, with the latter tally enough to secure the coveted Fifa Golden Shoe Award.

But the cynics might suggest that three of his goals in 2002 came in an 8-0 turkey-shoot against Saudi Arabia.

All of his goals in 2002 were headers, while in 2006 he scored twice against both Costa Rica and Ecuador - a record which suggests a one-dimensional forward who scores the bulk of his goals against weaker opposition.

His domestic career - all of which has been spent in Germany - has been a mixed bag. Last season, for example, he managed just three Bundesliga goals for Bayern.

Certainly, in terms of reputation and profile, Klose would be some way down the list of strikers to have played at the World Cup since he made his tournament debut in 2002.

Consider the competition at the start of the tournament in South Africa. Cristiano Ronaldo, Didier Drogba, Lionel Messi, Wayne Rooney and Kaka arrived as arguably the big five (although Spain's David Villa might have something to say about that) but went home having mustered two goals between them.

Klose, by contrast, might have seen red in the defeat against Serbia but is in excellent goalscoring form despite seeing Ivica Olic and Mario Gomez picked ahead of him virtually all season at Bayern.

Take, for example, Klose's first goal in the 4-1 thrashing of England. He showed the strength and persistence to shake off John Terry and Matthew Upson and the instincts of a true goal poacher to expertly steer a long clearance from Manuel Neuer beyond David James.

It showed that there is so much more to his game than his fabulous heading ability.

"Since 2002, he has always been a top performer in the major tournaments, always great for the national team, scoring decisive goals," German coach Joachim Loew told me during Tuesday's media session (just for the record, he arrived four minutes early).

"When it counts, Miroslav is there. It is not a surprise to me that he is scoring goals."

He is the type of player who responds to encouragement from those around him, particularly the coach. Perhaps that is why Klose thrives under Loew but struggled last season under Bayern boss Louis van Gaal, who has a more removed management style.

"Miroslav is fantastic in various ways," added Loew. "He integrates well with our style of play and is excellent at assessing his own performance.

"He knew when he joined the squad that he had not played as much as the other players and he knew that he had to train harder."

In a recent interview with German newspaper Bild, Klose explained that he had put himself through a strenuous personal fitness routine towards the end of last season. As a consequence, he lost weight and felt in better shape than he had for a long time.

The 2002 World Cup runner-up, who won his 100th cap against Argentina, also recently stated that personal scoring records are inconsequential: leaving South Africa with the trophy is what matters.

To have a chance to do that his side must defeat Spain on Wednesday in what will be a rematch of the Euro 2008 final. The Spaniards deservedly won 1-0 in Vienna, with Fernando Torres scoring in the first half.

Much has changed since, not least the loss of form by Torres after an injury-troubled season at Liverpool, as well as the emergence of a new generation of German talent.

Mesut Ozil, Thomas Mueller (who is suspended on Wednesday) and Sami Khedira have all enjoyed excellent tournaments. Khedira, a replacement for the injured Michael Ballack, is the oldest of the trio at 23.

The vibrancy, vim and vivacity that they have brought to the tournament has been well documented and should ensure that Wednesday's encounter is very different to their meeting two years ago. 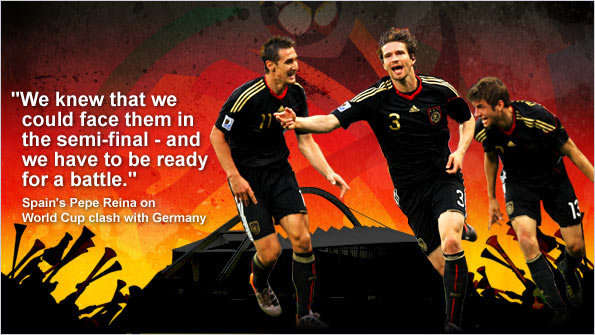 Germany have arguably been the most attractive side in the tournament

"Germany are better than at Euro 2008, they have got stronger and we know it will be tough," Spain's Pepe Reina told me.

"As well as their attacking ability, their defending has been really good and tactically they are well organised. They have skilful players with a lot of pace and they have been the best team so far in the tournament."

Germany should have the self-belief built after scoring four goals in three separate matches and demolishing England and Argentina in the knockout stage.

Torres, meanwhile, has yet to score for Spain, while Cesc Fabregas, so influential after coming off the bench against Paraguay, is not certain to play after sustaining a leg injury in training.

Spain, who like Germany have already tasted defeat in Durban, have scored seven in five games (in contrast to Germany's 13) and just once have won by more than a one-goal margin, against Honduras in the group stage.

But as they pursue their dream of reaching the World Cup final for the first time, Reina is adamant that his side possess the tools to end Klose and Germany's World Cup dream.

"We have seen all of Germany's games. We knew that we could face them in the semi-final and, God bless us, we have to be ready for the battle," added the Liverpool keeper, who, along with Victor Valdes, is back-up to Iker Casillas. "We have to keep our philosophy that brought us here and continue to trust in our ability."

Everywhere in Durban there are signs telling us that it is the "warmest place to be" during the World Cup. Hopefully it will be red-hot on Wednesday.