As far as forgettable World Cup group games are concerned, France's bore draw with Uruguay is right up there.

In fact, I'd love to hear if you think there are many that would rank below it.

We ought not to overlook the fact that for Uruguay it was a tricky first match against the 2006 finalists from which they took a potentially very valuable point.

As Uruguay coach Oscar Tabarez put it: "Considering France's history and that some of their players reached the final in Germany, and with their greater financial resources, then we have to face reality and say that a draw is not a bad result."

But what Friday's match most definitely did do was make a mockery of a recent claim by France skipper Patrice Evra that his team boast the best players in the world in just about every position.

Not at Green Point in Cape Town they didn't. They looked like a group of strangers still working their way through some painful introductions.

Much has been made of the recent change of system by coach Raymond Domenech.

France crashed out at the group stage at Euro 2008 and scraped through World Cup qualifying thanks to Thierry Henry's handball in the play-off against the Republic of Ireland.

During that time the 58-year-old infuriated many France supporters by continuing to play two holding players in Lyon's Jeremy Toulalan and Real Madrid's Lassana Diarra in a 4-2-3-1 formation.

But Diarra is injured and the coach of Les Bleus finally left Toulalan to do the job on his own, adopting a 4-3-3 system for the friendly against Costa Rica on 26 May and the two subsequent World Cup warm-up games. 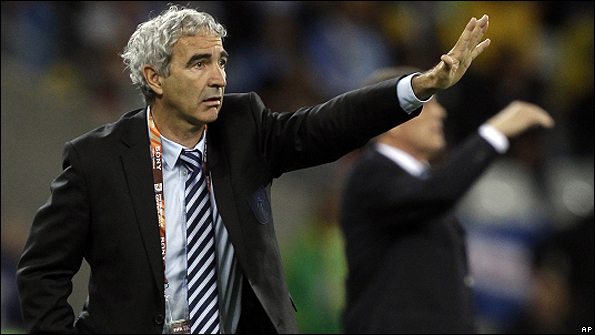 Raymond Domenech took charge of the France national side in 2004. Photo: AP.

Many players claimed they liked the new more aggressive formation even if the eve of tournament results, including a defeat against China, did not suggest so.

On Friday evening, Domenech dropped Florent Malouda for Abou Diaby. Many thought the coach had reverted to type, although I personally felt that the advanced position frequently occupied by Diaby ensured their shape flirted between the two systems.

For his part, the Les Bleus boss argued that all the talk of formation was not important, what really mattered was how you play the game.

If this is the case then he has cause to be very concerned.

France were ponderous and often bereft of ideas against Uruguay, struggling to break down La Celeste's defensive formation that sees them deploy three central defenders with two wing-backs supplying the width from slightly more advanced positions.

Of particular concern must be the role of lone striker Nicolas Anelka. He looked completely lost, taking up increasingly deep positions to try force his way into the contest.

France were too slow to move the ball from defence to attack. I am not talking about long ball stuff here, but the sort of swift and precise passing that can stretch a defence or catch them holding a high line.

However, this did not happen, so there were no through balls played in behind the Uruguay defence for Anelka to run on to with his clever movement and precise timing.

It was also painful to see the Chelsea striker and Sidney Govou frequently occupying the same space, making the defensive task much easier for their opponents. It was an evening of frustration.

Franck Ribery was an occasional threat down the left-hand side and we saw brief glimpses of his ability to link with Evra and Diaby, but these were all too fleeting.

And there was precious little to suggest that Bordeaux playmaker Yoann Gourcuff will have a big impact on this tournament. The son of respected coach Christian Gourcuff, the 23-year-old is regarded as a likeable and intelligent figure, as well as a possible heir apparent to Zinedine Zidane.

He has a superb passing range, excellent dead-ball skills and a speed of thought that compensates for a lack of pace - but it has also been suggested that he is not comfortable in the current set-up and has an uneasy relationship with some senior players upset at the generous press he receives in France.

Indeed, rumours that all is not well in the French camp seems to be a part of daily life for Les Bleus these days.

Defender William Gallas is not speaking to the media during the World Cup after being overlooked for the captaincy, while it was reported by French newspaper L'Equipe that Malouda, dropped on Friday, had a training ground disagreement with Domenech.

It is an open secret in France that the coach, who succeeded Jacques Santini after Euro 2004, has a difficult relationship with many in his squad.

He has admitted that astrology can influence his team selection and used an interview in the immediate aftermath of his team's elimination from Euro 2008 to propose to his fiancée, a gesture that was not well received back home.

Domenech stands down after the tournament to be replaced by former France central defender Laurent Blanc - and unless something dramatic happens it seems likely that his tenure will end on a disappointing note.

His team face Mexico and South Africa in their remaining group games and may well qualify for the round of 16, but there is little evidence to suggest they will repeat their exploits of 2006, when Zidane came out of international retirement to such devastating effect.

Evra recently stated that France were not heading to South Africa to go on safari - but at the moment that might be the only big game experience his team have in South Africa.