In other circumstances, Greece's Sokratis Papastathopoulos might have been arrested for harassment. Like a faithful dog following his master, he shadowed Lionel Messi to every corner of the Peter Mokaba Stadium as he took to his man-marking brief with some gusto.

Messi has clearly relished the roaming enganche (roughly translated as playmaker) role that he has been given in South Africa, playing behind two forward players in a 4-3-1-2 formation. But his ability to influence Tuesday's contest was tested by the intense attention he received from a physical - and at times cynical - opposition.

It was all part of a familiar ploy by Greece manager Otto Rehhagel, who makes no apology for the negative tactics that he adopts against superior opposition.

"We will play exciting football when we have Messi, Kaka, Iniesta and Xavi on the team," said the German-born boss after November's play-off victory over Ukraine.

Rehhagel's strategy is simple - pack the defence and midfield, stymie the opposition and try to strike from set-pieces or on the counter attack. Alas, it is a strategy that often ruins the contest as a spectacle.

It is a tactic that paid spectacular dividends at Euro 2004, a tournament that Greece won, but it is most definitely not attractive to watch. 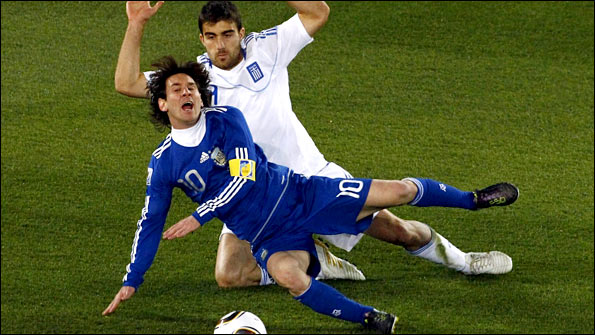 Me and my shadow - Sokratis Papastathopoulos was never far from Messi. Photo: Reuters

I saw Greece numerous times during their march to victory in Portugal and could not decide whether my respect for their organisation and discpline outweighed my sheer ambivalence at the prospect of sitting through another of their fixtures.

The Greek style was described to me by one journalist on Tuesday as "anti-football". I think that is harsh because, as Rehhagel argues, to try to ape the style of nations brimming with attacking talent would be to invite disaster. Even so, I doubt whether there will be many tears shed after Greece's elimination at the group stage.

In stark contrast, Argentina are clearly one of the biggest draws in South Africa. A look at the respective dugouts in the minutes before kick-off told you that.

While the experienced and respected Rehhagel had a clear view of the pitch, Argentine coach Diego Maradona could see nothing but an ocean of photographers.

The Albiceleste boss is pure box office and utterly compelling viewing. I rather hope that his team do well just so we see how his fiery temperament handles the highly pressurised business end of the tournament.

Already at this World Cup he has insulted Pele, Michel Platini and the general standard of European football. Needless to say, his press conferences are packed to the gills.

Against Greece, he was all smiles as he arrived at the stadium in team shellsuit and white trainers, still sporting his magnificent salt and pepper beard that he has apparently grown to cover a scar inflicted when his dog bit him several months ago.

He wandered around the pitch during the warm-up with the ease and swagger of a man who understands his authority, giving Rehhagel such a long embrace that his long dark mane was left decidedly ruffled.

Once the match started, it was not long before Maradona's smiles turn to snarls. The 49-year-old was apoplectic about some of the physical play of the Greeks, waving an imaginary yellow card in the direction of the referee and swivelling in disgust when it was not forthcoming.

The fury returned after the game, when Maradona answered questions about the Greek approach. It took a matter of seconds before his voice rose from normal to raging, like a sudden swell that washes over you and drags you under. His hands moved with such force that they almost distracted attention away from the glare of his diamond earrings.

"The Greeks were just pushing Lionel Messi," said Maradona. "After repeated fouls, take out the yellow card to the third player who hits Messi and you'll see that defenders don't hit him anymore. Why didn't the referee do that? It's in the regulations, man."

The much-maligned Jabulani ball was the next subject of his ire, but just as quickly as the squall appeared, so calm returned. Maradona offered us his most earnest look as he listened to another question before respectfully suggesting that the form of his team might warrant an apology from journalists who had prematurely written them off.

I thought it was interesting that Maradona noted that, despite their defensive strategy, Greece still caused his defence a few problems, with Martin Demichelis far too easily caught out by long balls forward.

Defence must surely remain the key concern for Maradona, but after making seven changes from the team that defeated South Korea 4-1, the Argentina boss must be buoyed by the form of several fringe players.

Clemente Rodriguez - so small and quick that, according to Maradona, he can run through an opponent's legs - made a strong case to retain his place. Rarely tested defensively, he was effective going forward and is the squad's only specialist full-back.

For a while on Tuesday, it looked as though Greece's tactics might work. Georgios Samaras had a decent opportunity shortly after half-time, when a goal would have given Greece licence to be even more defensive.

But Argentina, so full of craft, skill and invention, triumphed in the end. Messi's influence on the contest grew and his team carved open Greece's defence with regularity as they secured a 2-0 win.

Beauty felled the beast - but Argentina will face much better-looking opponents before this increasingly intriguing tournament is finished.