I strongly suspect that many neutrals favour the opposition when watching a Leeds match, and supporters of Millwall, Swindon, Charlton and Huddersfield all had good reason to hope that Leeds would fall at the last.

For a while it looked as though they would get their wish.

Mad Max Gradel had to be restrained by Jermaine Beckford (amazingly recast in the role of calm head) after he saw red in the first half.

Stewards and members of the backroom staff made their way on to the field to try to persuade Gradel that, having been sent off, he really ought to leave.

I have never seen scenes like it - and it added an angry, incendiary edge to an atmosphere thick with tension and anxiety. 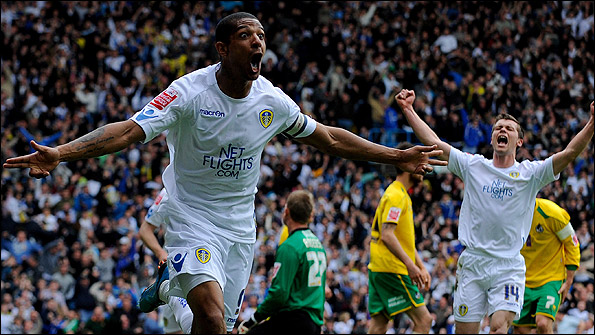 When Darryl Duffy put Rovers ahead shortly after the restart you could sense the fear of failure - the nagging, horrid, unwanted feeling - among the vast majority of the 38,234 inside Elland Road that their team would have to settle for a play-off place.

It would have not been much of a consolation because Leeds have failed in the play-offs three times in the last four years (the other year ended in relegation), hence the sheer, spontaneous exhilaration as Leeds belied their numerical inferiority to score twice in four crazy second-half minutes.

Chairman Ken Bates had spent all week warning about the harsh consequences of a pitch invasion but that particular episode of tough talking was always destined to fall on deaf ears and Beckford's winner saw fans spill on to the pitch and the final whistle prompted a full-scale invasion.

I was surrounded by joyous scenes. A man in late middle age sat slightly to my right punched the desk I was sat at with primal abandon, while friends and families hugged and jumped up and down.

Some supporters sang the club's anthem, Marching On Together. I was struck by the line "we've been through it all together, we've had our ups and downs."

It has been more or less all downs for Leeds since the turn of the millennium but that ended on Saturday.

Manager Simon Grayson paid tribute to his players after the match, applauding the way they held their nerve as form wilted and pressure mounted in the final months of the season.

He said that dealing with the huge expectation was the reason why this promotion meant more to him than the one he achieved at Blackpool.

Grayson, a Leeds fan as well as their manager, also discussed the possibility that his team might challenge for promotion next season. He does not hide from the fact that he wants to take United back to the Premier League and said there was a "possibility" of back-to-back promotions.

Part of his rationale is that Leeds had suffered in League One because they were a notable scalp and teams playing at Elland Road often raised their performance level.

Director and former player Peter Lorimer mirrored that sentiment this week when he suggested that being in League One was holding the club back.

But there will be other clubs with equal ambition in the Championship and so playing Grayson's team will have lost its 'cup final' appeal.

Grayson will sit down next week and start planning. He is going to need a few new faces if his team are to figure at the top end - with at least one striker a definite priority.

Beckford is out of contract and widely expected to join Everton. When Grayson was asked about the striker's future he replied: "You'd better ask Jermaine about that."

The 26-year-old's form has dipped since he scored the winner in the FA Cup at Manchester United at the turn of the year but, nonetheless, his goal against Rovers was his 31st of the campaign.

He is the first Leeds player since the great John Charles to score 30 in consecutive seasons and the team have relied on his goals.

Luciano Becchio scored 17 in the season, Robert Snodgrass was the third highest scorer in the campaign with 10. Grayson will need more artillery in the Championship and replacing Beckford will not be easy or cheap.

Bates said in his programme notes that Leeds will be "looking for opportunities to improve our current squad" but he also made it clear that the club, so troubled by financial problems for most of the previous decade, would not spend what they cannot afford.

Leeds have never publicly revealed who actually owns the club since Bates took over as chairman and under Football League rules, do not have to do so. It makes it difficult to estimate what sort of funds will be made available to Grayson.

The manager would not be drawn on his budget but, to an extent, its size will determine how realistic a promotion push is next season.

I would be very interested to know which areas Leeds supporters feel Grayson needs to strengthen - and how far they feel their team can go next season. For now, however,
they are more concerned with celebrating a successful end to this campaign.

As I walked to Elland Road on Saturday afternoon I saw coaches from the Harrow, Cov & Warks and Plymouth branches of the Leeds United Supporters Club.

Fans had come from far and wide to see their team clinch promotion and the game sold out some time ago.

What they witnessed wasn't the final stop in the triumphant procession to the title that the club's form before Christmas suggested.

Instead, they were put through an emotional wringer on Saturday before finally seeing their team limp over the line.

It wasn't pretty but it was dramatic - and ensured the club's awards dinner on Saturday evening was a celebration not an inquest.

Leeds have taken the first step on their long march back to the top.