Romance, reinvention and riches - Blackpool's promotion to the Premier League is a story that has it all.

Or as Blackpool's matchwinner Brett Ormerod, with a turn of phrase which his manager Ian Holloway would have been proud of, put it: "It feels like we have landed on the moon without a space rocket or a helmet."

Last season Burnley, this year Blackpool - two proud Lancashire clubs who have proved that the mouse can still roar in an age when money is regarded as a pre-requisite for success. 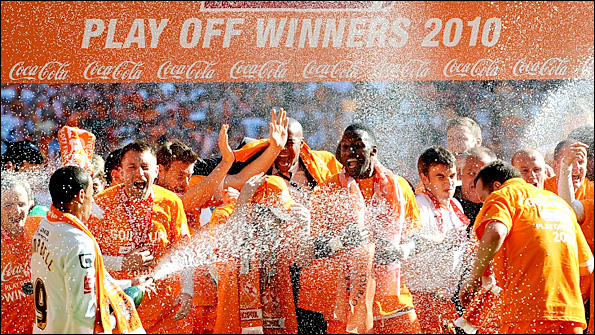 Blackpool enjoy the moment as they return to the top flight. Photo: Getty Images

At 8,611, Blackpool had the Championship's second lowest average attendance last season. Bloomfield Road holds in the region of 12,000 and, essentially, has three developed sides, while the pitch, much to Holloway's annoyance, has been heavily criticised.

Their record signing, Charlie Adam, cost £500,000 when he arrived from Rangers last summer and Blackpool's starting XI at Wembley contained a defender bought from Mansfield for £5,000, several players regarded as surplus to requirements at previous clubs and two loan signings.

No wonder I heard one fan remark that his side had won promotion with a team of "misfits".

Holloway was out of work for a year after his sacking at Leicester in May 2008 before Blackpool took a punt on a man who had become known more for his gags and memorable soundbites than his managerial ability. His contract had a clause that contained a bonus for keeping his team in the Championship. Lifting them out of it was not even mentioned.

Yet there was no question that his team deserved their 3-2 win over Cardiff at a sweltering Wembley on Saturday. It was an engrossing final, with all five goals coming during a mesmerising opening 45 minutes.

Holloway sent his team out with their customary 4-3-3 formation and both of his early second-half substitutions saw him replace a striker with a striker as Blackpool chose to try to extend their lead rather than defend it. 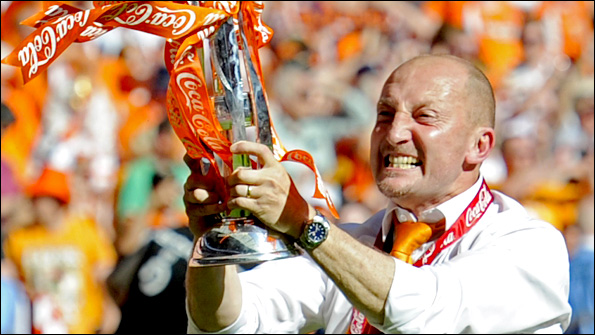 Holloway has shown he should be taken seriously as a football manager. Photo: AP

The Seasiders boss must be applauded for the bold and courageous manner in which he has taken a mid-table side with modest aspirations to their first ever season in the Premier League.

"It will change the lives of the people in the area," said Holloway, who hopes that the investment and interest aroused by his team's promotion will resonate for the whole town, not just the football club.

"We have done something that I do not think will be done again given the size of our budget."

The Blackpool manager paid rich tribute to his players after Saturday's victory and explained that persuading them to truly believe that they could achieve great things this season had been the key to success.

Forgive me the cliché, but Blackpool's is a rare footballing fairytale for a club that had not been in the top flight since 1971 and it is a great achievement for Holloway, who will now get the chance to test himself in the top flight for the first time.

"The best players in the world are now going to be coming to Bloomfield Road," added the Tangerines manager as he tried to comprehend the implications of a famous victory.

The match had been estimated as being worth £90m to the winners - and victory will undoubtedly transform Blackpool as a football club.

Chairman Karl Oyston, not always the most popular figure with the club's supporters, told me afterwards that the Seasiders would redevelop their media and medical set-up, rebuild the shambolic East Stand and transform their training facilities.

"It is a new set of problems for me," said Oyston. "It has always been the other way round - we cannot do things at Blackpool that we want to do because we do not have the money. The constraints have been removed and it is new territory."

Oyston would not be drawn on how much money Holloway might have to spend in the transfer market - but the manager himself did acknowledge that the price of promotion was huge.

"I come from a council house and the money is beyond my wildest dreams - and quite obscene," added Holloway.

The 47-year-old knows that he needs to bring in new players, and suggested he might try to sign some younger players on long-term loan deals from other Premier League clubs.

He also admitted that he might have to rethink the 4-3-3 formation that has taken his team to the top flight, while some of the club's Wembley heroes could be surplus to requirements in the top flight.

Cardiff manager Dave Jones also faces an interesting summer, albeit for different reasons as his club come to terms with a heartbreaking defeat.

The Bluebirds have seen off several High Court winding-up orders during the course of the season and are reported to have debts of £15m. 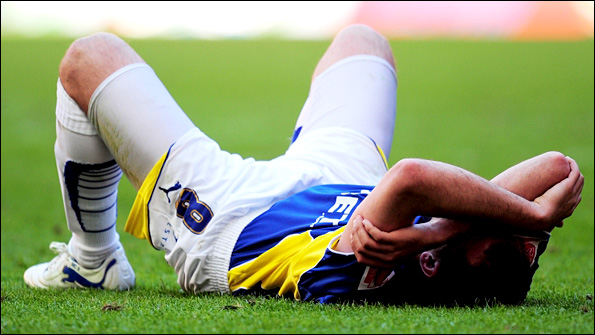 Defeat was all too much for some of Cardiff's players. Photo: Getty Images

Saturday's match was the final game with Peter Ridsdale as chairman and Jones plans to sit down with the new people in charge on Monday to plan for the future.

"I am hurting but I will have to reflect and look forward to coming back and starting again," said Jones.

The Cardiff boss made it clear that he had no intention of leaving the club and said he had not received a single enquiry from another manager about the availability of his players.

But he made also admitted that he, like Holloway, needs to strengthen over the summer in a variety of positions.

I thought Jones was dignified and gracious in defeat, speaking warmly about his friend Holloway.

Jones's response of "you never know" when asked whether Blackpool could stay up next season suggested he thought the task would be a huge one for the Tangerines, while bookmakers have already made Blackpool odds-on favourites to make a swift return to the Championship.

Holloway was allegedly kept waiting for 45 minutes when he arrived in Blackpool for an interview last May and had to be persuaded not to walk away in disgust before his and the Seasiders' remarkable journey had even begun.

But having taken Blackpool to the moon, the likeable Bristolian now faces the incredible - some might say impossible - challenge of keeping the Seasiders in outer space.