Sunday's relegation showdown at an emotional and tense Hillsborough showed us so much of what is great about football and, regrettably, a little of what is not.

Sheffield Wednesday needed to win to climb out of the Championship's bottom three and send opponents Crystal Palace down instead.

If it wasn't quite a straight shoot-out then it wasn't far off, and one group of supporters was always going to greet the final whistle with the kicked-in-the-stomach sensation that comes when you look up from your newly-relegated players slumping to the turf to see the opposition fans celebrating their team's survival in the stand opposite.

It is always a vivid contrast and Sunday was no exception. 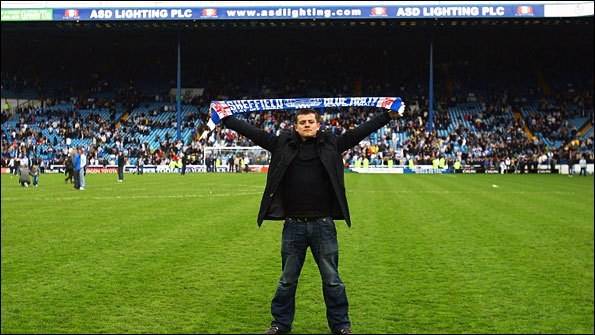 Darren Purse's goal after 87 minutes drew Wednesday level at 2-2 and ensured a grandstand finish, particularly when the fourth official's board revealed there would be five minutes of extra time.

Hope that had been so clinically extinguished by the excellent Darren Ambrose's side-footed finish to put Palace back in front in the 63rd minute, surged back through the home stands, while the jubilation of the away support was immediately suspended.

Palace fans will not agree but it was the finish that the game deserved. It had been a largely equal contest played in front of 37,151 supporters, all of whom were well and truly put through the mill.

Considering the high stakes, I thought it was a fairly open contest and both managers reflected afterwards on how it must have made for engrossing viewing for neutrals who watched the match on television. Not half.

The atmosphere was sensational and the way the two sets of fans responded to the theatre that played out in front of them illustrated why football is so special: the power that the game has to pulverise our emotions.

The weeping Wednesday fans as I walked away from the stadium, many being comforted by friends or relatives, told you that it would be their team playing League One football next season.

In sharp contrast, the Eagles supporters with whom I am currently sharing a train heading back to London, are singing about their love of Palace, in triplicate.

They probably feel they deserve some good news after a torrid few months. The Eagles' push for promotion was brought to an abrupt end when the club was put into administration in January and subsequently docked 10 points. 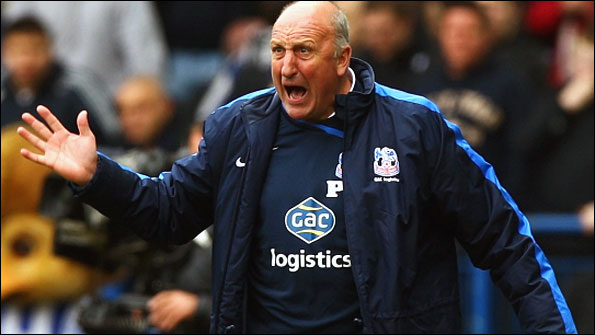 Hart has been in charge of two crisis clubs this season - photo: Getty

Their best player was sold and the manager left. Despite staying in the Championship, the very future of their club remains in doubt.

Now that the season has ended there is no more money to keep the club going and hope lies with the CPFC 2010 consortium that is currently trying to thrash out a deal to buy both Selhurst Park and the club (which are in the hands of separate administrators).

I'd imagine that to some extent all of this season's uncertainty, tension and anxiety rose to the surface on Sunday. After months of being battered and bruised, Palace supporters had something to celebrate.

For some it was too much and as the Palace players headed towards them after the final whistle they rushed on to the pitch. It was at this point that Sunday threatened to turn very ugly.

Wednesday supporters also invaded the playing area. Some headed towards the Palace fans but, as far as I could tell, the police ensured they remained segregated.

Several Palace players had been engulfed by their supporters and as I looked down at the pitch from the main stand it was difficult to work out exactly who was where.

A stand-off of sorts ensued between the two sets of fans and, in what must have been a fairly terrifying few seconds, Palace defender Clint Hill was pursued as he tried to leave the field. Several aware and courageous stewards ensured he made it to the tunnel safely as irate individuals lashed out at him.

A group then tried to chase Hill down the tunnel and it required baton-wielding police to restore order. It was ugly and unnecessary. It reminded me that sometimes football supporters lose their sense of perspective.

What made the whole incident even more idiotic was that Hill had been one of three Palace players that I saw who spent the initial few seconds after the final whistle trying to console Wednesday players rather than savouring their own achievement.

One Palace supporter told me he had been extremely anxious as he left the ground. The two sets of fans were separated by a police line but, even so, scuffles broke out and he felt the situation had the potential to quickly degenerate.

Neither Wednesday boss Alan Irvine nor Palace counterpart Paul Hart had witnessed the post-match events. After shaking hands both had immediately returned to their respective dressing rooms.

Irvine always strikes me as a decent, hard-working manager with an excellent temperament. I am sure that he is distraught by his team's relegation but he spoke with great common sense and dignity afterwards.

The Scot felt his team had almost climbed a mountain after twice falling behind in the game but acknowledged that wasted chances were the story of the season since he became Wednesday manager in January.

A poster on the tram I took back to Sheffield station showed a Wednesday fan with the strapline: "It's my life, it is in my blood."

Owls supporters must be hurting right now but Irvine pledged to build a Wednesday team the fans can be proud of and I do not doubt the sincerity of his words for a second.

The rebuilding starts now at the club and, with three players whose loan deals have expired and a further eight out of contract, Irvine has a busy summer ahead of him.

Rebuilding is the last thing on Hart's mind. He arrived on a short-term deal in March after Neil Warnock jumped ship and his contract ended with Sunday's game.

Hart made it clear he would like to be considered for the managerial position if a new consortium does complete a deal at Palace, but after a season that saw him in charge at Portsmouth and QPR, as well as the Eagles, he ruefully admitted: "I'm job hunting again."

Hart said he had felt relief at the final whistle but also sadness. He is a former Wednesday player and a friend of Irvine. It was clear his joy was conditional.

After Hart finished speaking to the media he walked out of the door and headed home to spend some time with his family. He was going to do the normal sorts of things that are not possible when you manage a football club.

Not an hour had elapsed since the final whistle but already Hart and Palace had gone their separate ways, for now at least, while the size of Irvine's job at Wednesday has just increased significantly.

As I walked to the tram stop after the game I saw a ferris wheel turning in the distance and it made me think that although seasons end, football never really stops.

Wednesday fans currently absorbed in their own private grief will slowly heal over the summer months as their squad is reshaped, while the anxiety continues for Palace supporters, who have seen their team stay up but desperately need someone to rescue their club.