Who is going up from League One?

Until the sun descended and the temperature sharply dropped, there was the unmistakable feel of spring in the air at Southampton on Tuesday.

It was a sure sign that after a long and biting winter, the most engaging and competitive League One season in many years is moving into the home straight.

Saints were superb as they thrashed Huddersfield 5-0 - strong in defence, tigerish in midfield and clinical in attack. I have rarely, if ever, seen a performance of such quality from a third-tier team.

There was a mood of optimism about the place as the boisterous home support celebrated a win that was in the bag by the half-hour mark, leaving them an hour to sing about their forthcoming trip to Wembley for the JP Trophy final.

The question now is whether Southampton, who thrashed Walsall 5-1 last Saturday, can pull off something truly sensational and snatch a play-off spot.

They started the season on minus 10 points and needed eight attempts to win a league fixture. And although they have two games in hand on sixth-placed Huddersfield they are 14 points behind the Terriers with 14 games left to play. 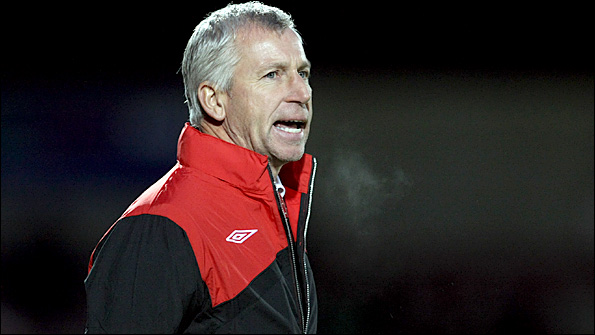 "It is a long, long way when we are chasing teams that are winning a lot of their games," said Saints boss Alan Pardew, whose team are now 10th in the table. "We will need a lot of luck but there are still a lot of points left to play for."

Clearly he hasn't given up and on the evidence of Tuesday his team looked capable of mounting a spectacular run. If they won, for example, 11 of their remaining fixtures that would take them to 77 points, which would have been good enough for a top-six spot last season.

However, there are two big problems here. The first is that playing on their silky-smooth home surface is one thing; handling the heavy, boggy pitches away from St Mary's has proved to be a totally different proposition.

The point is not missed on Pardew, who said he expected Tranmere to be dousing the Prenton Park pitch ahead of their meeting this weekend, before drily observing: "Southampton are a racehorse that does not like the mud."

Secondly, it could well be that a points total in the late 70s will not be enough to secure a play-off place this season.

There are 10 weeks of the campaign remaining and with between 12 and 14 fixtures for most of the teams, common sense suggests that promotion will be decided by the top seven.

I'm discounting MK Dons, who are eighth in the table and nine points behind an in-form Millwall one place above them. Paul Ince's Dons have lost their last two games and with rumours flying about regarding the manager's future, his side appear to lack the momentum necessary to make up lost ground.

I was starting to think that Huddersfield were looking like serious contenders and travelled to Southampton to check out their form.

The Terriers would have moved into fifth with victory but instead endured a chastening evening that ended their 11-match uneaten run in such an emphatic manner that manager Lee Clark must hope it does not damage the morale of his young squad.

Town had won their previous three away fixtures and looked to have cast aside the patchy away form that blighted the first half of their season but they were blown away at St Mary's.

"Very, very sore, embarrassed and angry," was the assessment of Clark.

"I would not like to put my name to that performance but I am the manager and so I have to. I am hurting a lot. I will watch the DVD and it will be a horror show."

Clearly, as things stand, the favourites to secure a top-two finish are Norwich, who are five points ahead of Leeds in second and, tellingly, nine above Charlton in third.

The Canaries have won 11 of their last 13 league games and Paul Lambert's team show no sign of faltering.

The same cannot be said of a Leeds outfit that I felt were well equipped to last the distance but appear to have lost their way since claiming the considerable scalp of bitter rivals Manchester United in the FA Cup.

That fixture took place on 2 January and Leeds travelled to Old Trafford safe in the knowledge they had an eight-point lead over Charlton in second. 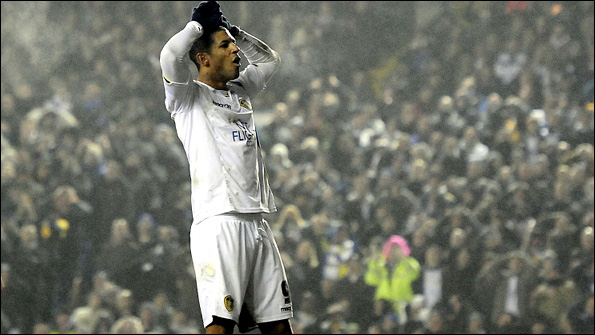 Beckford has struggled to find his best form. Photograph: PA

However, a game every three-and-a-half days since then appears to have badly derailed Grayson's team, with just two wins in their last 10 league fixtures. Jermaine Beckford, the hero in Manchester, has stayed at the club but his goals have dried up while Gary McSheffrey has not made an impact since his January move from Birmingham.

Leeds have consecutive fixtures against Saints, Millwall, Norwich and Swindon through March and early April - and their season is about to enter a defining phase.

Charlton are currently third but I'm not sure they are the most likely to capitalise on any shortcomings at Elland Road, with the gruelling season perhaps catching up on their smallish squad.

The Addicks started with six straight victories but have won two of their last seven. Manager Phil Parkinson remains confident his team can finish strongly but they, like Grayson's team, face a tough set of fixtures, with Norwich, Leeds and Colchester all coming to the Valley.

It wasn't looking too clever for Colchester after they followed a 7-0 hiding at Preston by conceding five at home to Norwich in early January but manager Aidy Boothroyd is nothing if not upbeat and was soon talking in terms of the response to a knock down being the making of his men.

His team haven't done too badly since, with five clean sheets in nine games, but they missed a big opportunity on Saturday in losing 3-2 at Bristol Rovers.

Victory at the Memorial Stadium would have put them just two points behind Leeds but despite the defeat club insiders tell me that there is still a strong belief they can snatch second.

The surface at the Weston Homes Community Stadium is a shocker, but that actually favours the home team's direct style of play. Combine that with a reasonable run-in and it would clearly be foolish to discount Colchester.

Then there is Swindon, who are unbeaten in 13 League One fixtures and have a devastating strike partnership in Charlie Austin and Billy Paynter, with January arrival Vincent Pericard clamouring for the opportunity to make an impact.

Throw into the mix a Millwall team that has won six of their last seven matches and I think there is a strong case to be made for League One emerging as the most exciting of the top four divisions.

And in the midst of it all remains the wild card that is Southampton, who are already heading to Wembley at the end of March for the JP Trophy final.

But it is surely too much to expect a repeat visit. Isn't it?