Darren Ferguson is the new manager of Preston North End - and according to Russell Martin, his former captain at Peterborough, the Lancashire club has landed a man heading to the top of his profession.

A talented midfielder in his own right, Ferguson walked through the doors at London Road in January 2007 after impressing owner Darragh MacAnthony during a lengthy telephone interview.

His first full campaign saw the unfashionable Cambridgeshire club promoted after finishing second to MK Dons and the following year his team hugely upset the formbook by again clinching automatic promotion, this time as runners-up behind Leicester.

"Playing for Darren was thoroughly enjoyable," said Martin, who joined Posh in the summer of 2008 and was both skipper and an ever-present during the League One promotion campaign.

"When he left the lads were queuing up to see him. They wanted to thank him for what he had done for their careers." 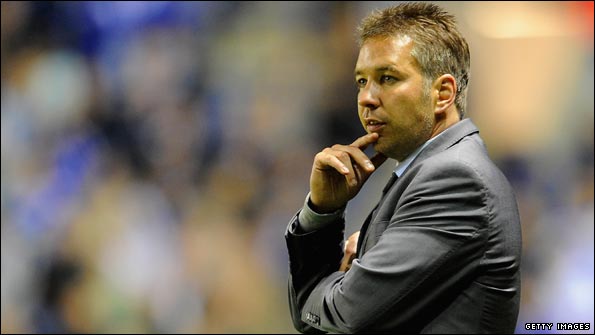 Ferguson was popular with his players at Peterborough

Martin, now at Norwich, talks in glowing terms of the balance that Ferguson struck between being one of the lads - he is, after all, still only 37 - yet understanding that there must be a divide between a manager and his playing staff.

"He knew when to have a joke and when to be serious - I think that is really important and something he did very well," added Martin.

The defender noted that Ferguson often joined in with the training sessions, which were always of a particularly impressive standard. He insisted on a constantly high tempo and even during pre-season all would involve at least some form of ball work.

In all tied in with the core philosophy of what defines Ferguson as a manager - his desire to see the game played in the right way, namely on the floor and in an attacking, attractive manner.

He wanted players who were comfortable on the ball and not afraid to show the sort of ambition that might occasionally lead to mistakes. Sometimes it would frustrate the crowd but if the players were faithful to what Ferguson asked of them he would always come to their defence.

"If the boys gave 100% he would back them no matter what," added Martin. "He took a lot of pressure off his players.

"If the performance wasn't right, he would let the lads know about it in the dressing-room, but he never doubted us and ultimately gave us the belief to succeed.

"He seemed to know when to pick his moments, when to stay calm at half-time and when to deliver a kick up the backside," he said. "If someone is going to be a top manager, then that quality is vital."

Ferguson was managed for six years at Wrexham by Denis Smith, who quickly recognised that his midfielder would go on to become a manager.

"Darren was always chatting before games, telling the players what to do, he took on responsibility and was good at relaying my orders onto the pitch," said Smith.

"Darren always wanted to know why and there is nothing wrong with that. I wanted my players to question my decisions, as managers are not always right and that's what he did.

"There are people who you know have a chance to become a good manager and he was one of them. He is a leader and a strong character."

According to Martin, Ferguson is quick to acknowledge when he makes a mistake. This attribute further endeared him to his players at Peterborough and helped to foster the feeling that they were all pulling in the same direction.

The former Manchester United, Wolves, Sparta Rotterdam and Wrexham midfielder further built up the confidence of his players by stressing that regardless of the opposition, whether playing home and away, his team were always to play their way. This meant a 4-4-2 formation, with two wide men and a quick and nimble strikeforce.

But he was also meticulous with his preparation. Often during the week the likely starting XI would play against a shadow team designed to mimic the formation of their next opponents. Ferguson would discuss with individual players the strengths and weaknesses of their direct opponents and how best to deal with them.

Occasionally, when particularly big games loomed, this would involve short video sessions but the manager was always careful not to overload his players with information.

I'm told that Ferguson and his backroom staff took in a lot of games as they scouted both the opposition and prospective signings. Ferguson would identify targets and often play a part in persuading a player to join.

Take Charlie Lee for example. The midfielder was reserve-team captain at Spurs and had attracted interest from 16 clubs when it became apparent he would be leaving White Hart Lane in the summer of 2007. Yet Posh, a League Two club, landed him, thanks chiefly to Ferguson's powers of persuasion.

Occasionally Peterborough would use Manchester United's training facilities ahead of away games in the north, while Sir Alex would often be seen at London Road watching his son's team in action.

But Darren has always been determined to forge his own way in management and the only United player he signed on loan was James Chester.

"I think without any shadow of doubt he has had to work harder because of who his father is," added Smith. 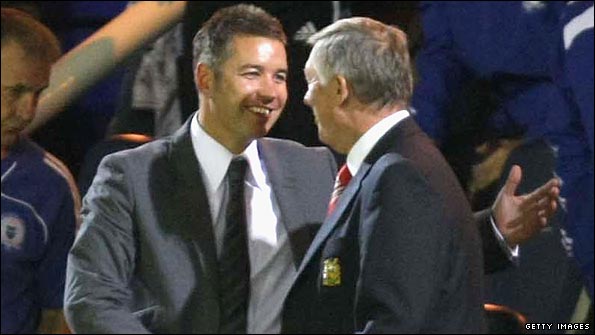 Ferguson (left) is determined to forge his own managerial career

"Everybody expects more from him and it's been very difficult for him. But he's made sure that he's got where he is now off his own back and not his father's. He's proved his case now."

Darren did not have particularly long to test himself at that level with Peterborough, leaving the club shortly after their defeat at Newcastle on 7 November with the club bottom of the table.

I certainly thought that given what he achieved over the previous two years he had earned the opportunity to be given longer to show he could haul his team up the Championship table.

He will now get the opportunity at Preston to show that he is ready to take the next step on his managerial journey.

Smith, for one, believes North End have the right man.

"They are getting someone who is organised, hard-working, dedicated and who can spot a good player," he said.

"He doesn't suffer fools gladly and if anyone tries to muck him about he won't stand for it. Having said that, he is a very fair person and if you've got a fair answer he won't hold grudges."

"He will speak his mind, he is a leader, which is why I made him team captain. We had our disagreements but we got on because we were both trying to achieve the same thing and that was winning. And that is what he is. A winner."

Posh is a homely club who play in an old-fashioned stadium rich in character but limited in potential.

Preston have an excellent stadium in Deepdale and are desperate to reach the Premier League after a decade of near misses.

If the new manager can achieve this then there really will be only one Ferguson in Preston. And it won't be Sir Alex.