At the Weston Homes Community Stadium.

The sign above the Colchester dressing-room door on Saturday read: "You don't win on emotion, you win on execution."

I can only assume that it was the Norwich players leaving their dressing-room directly opposite who absorbed the message at a sodden Weston Homes Community Stadium on Saturday.

Six shots on target, five goals scored - statistics that signalled misery for the vast majority of the record crowd of 10,064, but guaranteed the very sweetest of revenge for the Norwich supporters who had watched their team humbled 7-1 at home by the same opposition on the opening day of the season.

The away support missed no opportunity to gloat and glee - and provided the perfect backdrop as Norwich manager Paul Lambert revelled in the role of pantomime villain. 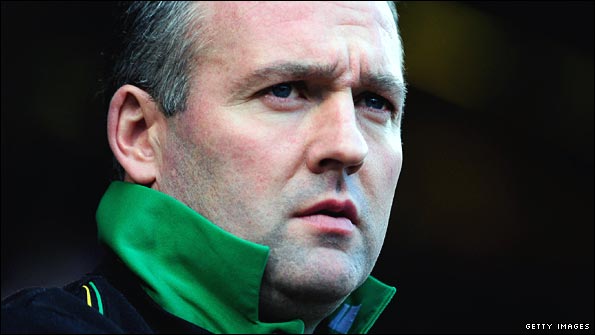 The Scot, of course, started the season in charge of Colchester, and watched from the away dugout in the August sunshine as Bryan Gunn's Norwich were humiliated.

Norwich and Colchester have been unable to agree a compensation deal since Lambert switched sides and relations at boardroom level have soured considerably.

U's chairman Robbie Cowling made a considerable rod for his back as he spiced up the hype ahead of the fixture by stating that he had never wanted a victory as much as he did on Saturday.

He also refused to extend Norwich's original ticket allocation, noting that he would rather see empty seats than have them occupied by Canaries supporters.

Cowling's vocal tactics worked as the publicity generated ensured a sell-out crowd, but alas the U's chairman had to listen to a series of taunts from the away supporters, who took great relish in asking "Robbie - what's the score?"

The supporters clearly had the endorsement of the Canaries manager, who repeatedly moved to the edge of his technical area and offered them a very approving thumbs-up.

Lambert seemed to be having a whale of a time. During the week he had offered an extremely straight bat, reeling out the cliche that the contest was just another game.

But come Saturday there appeared to be something almost theatrical about his behaviour.

I couldn't spot him anywhere during the warm-up and he was last out of the tunnel before the match started, his appearance prompting a chorus of boos.

There was no skulking in his seat in the dugout for this Scot, who appeared to stand obligingly in front of the assembled photographers before walking over to Colchester manager Aidy Boothroyd, shaking his hand and returning to his technical area with a smirk on his face.

Lambert irritated the home support by jumping in the air and pumping his fist in a manner reminiscent of Martin O'Neill every time Norwich scored. Given that he had five attempts to hone his celebration, he was really rather polished by the final whistle.

I thought that he over-stepped the mark when he responded to a volley of "easy, easy" by egging on the away supporters, raising his hands in the air to the rhythm of their chants.

It all proved too much for one Colchester fan, who bolted from his seat, got on to the pitch and headed towards the away end.

It was one of the most futile acts I have witnessed in some considerable time, the only possible silver lining being that his prompt ejection ensured he did not witness the late goals that lent the scoreline a slightly harsh appearance.

Emotions might also have got the better of former Norwich striker Ian Henderson, who came off the bench to make his Colchester debut but saw red for a late challenge on Darel Russell.

Lambert, who took over at Norwich with the club in the bottom four, admitted afterwards that he had rather enjoyed it all and was quick to point out that having played in Glasgow for Celtic he was more than used to handling the animosity of rival fans.

And for most of the afternoon the atmosphere was hardly malicious. It had an almost comic element to it, with Lambert cast as the bad guy. I saw one grown man respond to Lambert's appearance by dishing out a double thumbs-down.

After the match Lambert talked at length in the tunnel with several of the Colchester players that he used to manage.

Several more came over to shake his hand and it seemed to further underline how his antics during the match were part of a performance, with Lambert high on the adrenalin of a big game. Now, in this quiet moment, there was none of the animosity that had fuelled the build-up.

Lambert was obviously delighted with the scoreline but quickly returned to the under-stated countenance he had adopted during the week as he answered questions about the result.

He insisted he had not mentioned the 7-1 result in the build-up to the match, never tried to use it as motivation. Besides, Lambert argued, with so many games left to play this was never going to be a season defining fixture.

But he can take great encouragement from the way his team adapted to the difficult conditions. Dribbling was nigh on impossible and passing was difficult. As the rain fell, the early signs were that it would be an afternoon better suited to Colchester and their more direct style.

But Norwich held firm against the home team's early assaults and took the lead with Chris Martin's precise finish. It set the tone for a match that saw Norwich show a clinical edge in front of goal that hints at a rapid departure from League One.

Norwich don't play with much natural width, but with Wes Hoolahan behind Grant Holt and Martin, they are not lacking in creativity or artillery. 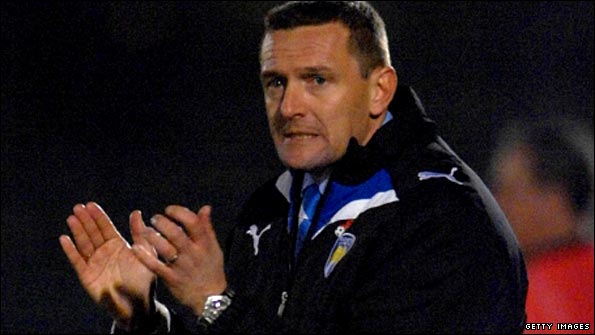 They have won their last five fixtures and, with leaders Leeds losing on Saturday, are now just three points off top spot.

The players have a momentum and confidence about them but in Lambert they have a manager whose temperament seems well disposed to keeping his squad focused.

A few Colchester fans hung around after the final whistle and dished out some X-rated abuse to Lambert, who most certainly repaid in kind, but the majority of the Colchester fans left, like their team, beaten and deflated.

They have now conceded 12 goals in their last two fixtures and manager Boothroyd desperately needs to shore up his leaky defence.

Boothroyd attributed four of Norwich's goals on Saturday to individual errors and quite correctly pointed out that although his team trailed 2-0 at the break they had been the better side for much of the opening half.

"They were silly errors," said Boothroyd. "It's our fault, we have made a beatable team look very, very good."

The Yorkshireman was honest enough to admit that the result had left him slightly shell-shocked but it is hardly all doom and gloom for Colchester.

The defeat was just the third in 19 league fixtures since Boothroyd took over at the club.

They are fourth in the table with at least one game in hand on the sides above them. When asked about making the play-offs the Us boss suggested that was negative talk. Why not still think about automatic promotion?

I'm not sure how many Colchester fans would agree with him, but they should not give up on the idea that the season could still finish successfully.

Heading back to the train station after the match, I heard the sort of optimism that ensures football fans come back for more even after a 5-0 drubbing.

An hour after watching his team humiliated, I heard one man say to the other: "Don't worry, we'll beat them in the play-offs."

Possibly, but I reckon Norwich might just be thinking that they won't need to take that particular route to win promotion.