Reading defender Alex Pearce found himself in the headlines before the start of the season when his manager compared him to England captain John Terry.

The Royals had just played Chelsea in a friendly and Pearce had enjoyed a very solid afternoon trying to snaffle the not inconsiderable threat posed by Terry's club team-mates Didier Drogba and Nicolas Anelka.

Pearce and Terry come from very different backgrounds. Terry went to Eastbury Comprehensive in Barking and played for the Senrab club side that also counts the likes of Jermain Defoe, Sol Campbell and Ledley King among its former players.

Pearce attended the esteemed Oratory School in Woodcote in Berkshire. Composers, politicians, soldiers and rugby players are among the famous Old Oratorians. Pearce played fly-half for the rugby team and showed early promise but always preferred the round ball.

There are undoubted comparisons to be made between Pearce and Terry beyond the fact that both wear the number 26. 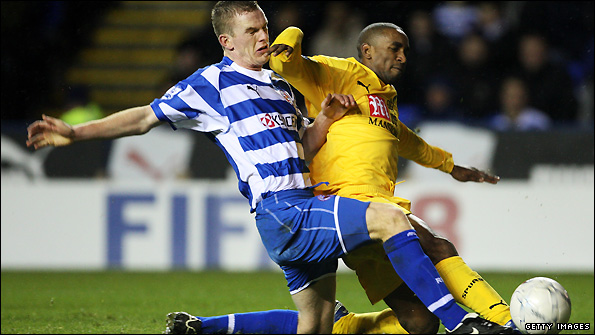 Both have come through the ranks at their club. Pearce seems to have the same drive and natural leadership that Terry obviously possesses in abundance. They are good in the air, solid all-round defensively and competent in possession. Pearce is candid enough to admit that he is far from quick, though the same might be said of Terry.

"John Terry never seems to get caught," added Pearce. "People say he is not the quickest but he is sharp in the mind.

"I actually try to base my game on him. I watch him all the time on TV and study his play."

Pearce was brought to Reading by current boss Brendan Rodgers as a 12-year-old when the Royals manager worked with the club's Academy,

Rodgers eventually left to take up a similar role at Chelsea before a short spell as manager of Watford ended when he returned to Reading. Knowing Terry from his time at Stamford Bridge, Rodgers gave the defender's mobile phone number to Pearce.

"I texted John and he said I could call him any time. He has since texted me a couple of times before games to wish me luck," added the Reading defender.

Rodgers is obviously in a strong position from which to compare the two players, but I wonder whether Rodgers might have been shrewd to keep his observation to himself. Being compared to the England captain is a hard billing for a young player to live up to, although Pearce describes the comparison as a massive compliment.

Certainly, there are plenty of talented young defenders in the Football League - Sean St Ledger (Middlesbrough), Miles Addison (Derby) and Sean Morrison (Swindon) to name but three. I would be very interested to know who you rate - and who you think can go on to play in the Premier League.

I met Pearce last week and several times during my conversation I had to remind myself that he is only 20. He talks with a calm assurance and maturity way beyond his years. I suppose it is a measure of Pearce's even temperament that he seems to be unfazed by the burden that being compared to Terry can bring with it.

Pearce, with loan spells at Northampton, Bournemouth, Norwich and Southampton under his belt, was made vice-captain over the summer but, with Ivar Ingimarsson injured at the start of the campaign, he started the season as skipper.

The script suggested he would form a key part of the bold new era under Rodgers, who has adopted a new system with a heavy emphasis on ball retention.

But not much has gone to plan at the Royals this season.

The season didn't start all that badly with two clean sheets in their opening three Championship fixtures and a 5-1 win over Burton in the Carling Cup.

But Reading have managed just two goals in their seven home Championship fixtures and have conceded 23 goals from their 15 league games. They have problems at both ends of the pitch and have lost their last four games.

The Royals lost again on Monday, 1-0 to Leicester at the Madejski Stadium. They haven't won at home since January and are currently in the bottom three.

Reading, with Pearce returning to the side as skipper in the absence of the suspended Ingimarsson, were unluck against the Foxes but were punished for failing to convert any of the numerous chances they created.

Clearly, something isn't working and the Rodgers era has yet to get off the ground.

Perhaps the new boss has tried to change too much, too soon. Rodgers changed the system when he took over, with Steve Coppell's attacking 4-4-2 giving way to a more fluid 4-3-3 system with a heavy emphasis on retaining possession.

"It takes time for everyone to get used to new systems," said Pearce diplomatically. "There has been a massive change in the club and it does not gel overnight.

"We do a lot of passing in the new formation on the training field, working hard to get used to our positions and what to do in the shape - that is the idea."

Rodgers revealed the pragmatist within him by switching to a 4-4-2 for the recent game at QPR, acknowledging the need for a temporary return to the old system to get some points on the board and rebuild confidence. The Royals lost 4-1, prompting fans to chant the manager would be sacked in the morning, but he stuck with 4-4-2 against the Foxes.

Rodgers has experimented with changing personnel as well as his formation and Pearce found himself rested after the 3-2 defeat at Peterborough in mid-September.

Determined to show his commitment, the 20-year-old surprised everyone by turning up in the dressing at Preston before kick-off after driving up to support the side for their midweek fixture. 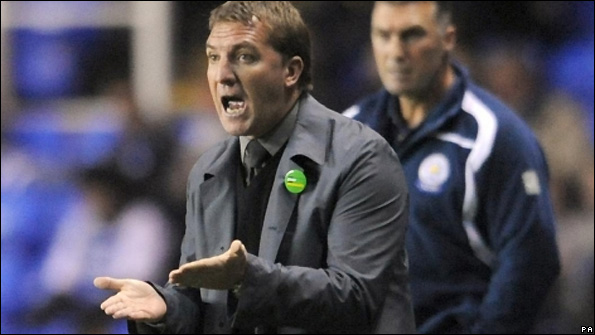 Rodgers is under pressure after a poor start to the season

Pearce is one of several players in and around the first-team squad who have come through the Reading Academy. The likes of Hal Robson-Kanu, Jem Karacan and Simon Church have all figured this season and, although it might not look that way at the moment, Pearce is confident that they can form the basis of a successful future for the Royals.

The central defender, who has played for Scotland Under-21s but remains eligible for England Under-21s, is out of contract at the end of the season but is confident a new deal will be sorted out. He told me that he is happy to let his agent sort it out while he focuses on improving Reading's position.

The club's current predicament must be painful for Reading supporters after the golden era under Coppell but Pearce is adamant that morale remains high within the squad.

"The spirit in the camp is brilliant and all the lads get on well," he said.

"Without a doubt there is an undoubted amount of ability in our group of players - it is just getting the right blend with youth and experience and the manager will get that right."

And when I asked Pearce where he saw himself in five years, he exhaled loudly and thought for a moment before smiling and remarking: "Captaining Reading in the Premier League wouldn't be bad - but I think we need to focus on the short-term first."