The naturalised Pom was at The Stoop to watch Australia and New Zealand smash out a 20-all draw of such ferocious intensity and crunching defence that he could be forgiven for breaking out in the occasional cold sweat.

The previous evening he had watched his England team labour to victory over France in Doncaster after trailing 12-4 at the break.

If England's Four Nations opener had been a lullaby then Saturday's match was heavy metal.

England were simply awful in the first half of their match but, credit to them, improved considerably after the break.

There were plus points for Smith to take from his team's game - the impact and invention of Kyle Eastmond after his introduction, the expected thrust and go-forward of his pack, the way some of the combinations started to gel as the contest wore on.

But as I said the other day this is an England side with an extremely young and inexperienced backline. 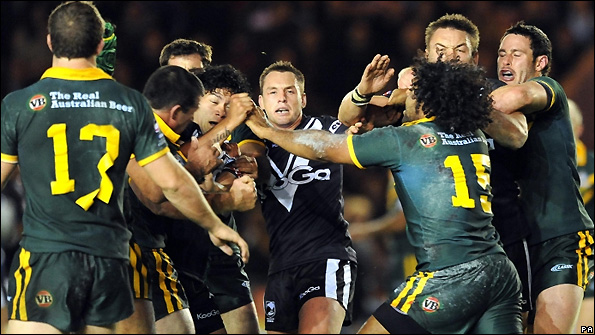 Smith's team is on a learning curve and if he didn't realise it before, he must now be all too aware of the gargantuan test his outfit face against Australia at Wigan next Saturday.

The Kangaroos were far from their best on Saturday evening - skipper Darren Lockyer talked about the timing in the team being slightly off after several weeks without a game. The amount of dropped ball almost hinted at slight rustiness.

There was also precious little for Jarryd Hayne to take out of the game. When I spoke to England and Wests Tigers second rower Gareth Ellis recently he referred several times to the devastating form shown by the Parramatta Eels full-back last season. Hayne, however, played on the wing against the Kiwis and was a largely peripheral figure. Whether he will be so anonymous against England remains to be seen.

Australia played with the customary patience seen so often in club games in the NRL, dominating large periods of possession and threatening the Kiwi line. They were thwarted time and again by brilliant defending but when the combinations in their much heralded back division start to fire, somebody is in for a very tough time.

Centre Greg Inglis and hooker Cameron Smith, team-mates at Melbourne Storm, were outstanding and combined for the Kangaroos' last-gasp try that allowed them to snatch a point.

The Kiwis showed the virtue of a physical approach against Tim Sheens' team and England's forwards must show great enthusiasm at Wigan. In Jamie Peacock, Adrian Morley, Sam Burgess and Ellis they certainly are not short of physicality, though the defensive strength of the backs is not comparable with the Kiwis.

Some Australians I know are less than thrilled with their team's forwards. The old warhorse Petero Civoniceva was superb on Saturday but the Kanagroos pack lacks a talismanic figure like Gorden Tallis or Shane Webke, while props Ben Hannant and Brett White made their debuts against the Kiwis. England can win the forward battle next weekend. They will have to.

Once England have played the Kangaroos they take on world champions New Zealand in Huddersfield. Realistically they will have to beat one of them to reach the final in Leeds on 14 November.

The Kiwis had been written off by some before the tournament. That did not look like clever thinking on Saturday.

Some of the hits delivered by Kiwi loose forward Adam Blair were truly X-rated, they made you wince as you looked at them, while the sensationally named Fuifui Moimoi's propensity to literally run over the opposition was on full display.

The sheer physicality of Stephen Kearney's team was thrilling to witness but they are also well drilled defensively.

What's more, captain Benji Marshall and Nathan Fien were effective in the halves and Lance Hohaia showed the devastation the modern-day full-back can inflict when he joins the attacking line.

England really should look on the coming weeks as an opportunity. Players like Eastmond, Richie Myler and Sam Tomkins could have the chance to add to their burgeoning reputations. Australians might not have that much respect for Super League but they will appreciate it if England's young stars stand out against the fabled green and gold.

But before we start getting ahead of ourselves, Smith's team has an awful lot of work to do before next Saturday's encounter.