In the aftermath of Ipswich's 4-0 home defeat on Saturday a journalist started to ask manager Roy Keane a question about the importance of the forthcoming games against Sheffield United and Barnsley.

Keane cut him off with the line: "You're going to tell me something I don't know?"

Make no mistake, the Irishman is under no illusions about his current predicament.

Ipswich have yet to win a Championship fixture this season and have made the worst start to a league campaign in their history. They sit 23rd in the Championship.

Keane was booed from the field at both half-time and full-time while the Newcastle supporters amused themselves with chants about his possible imminent demise (this involved briefly breaking off from venting their spleen about Mike Ashley).

I'm not quite sure what I expected from Keane in the aftermath of his side's atrocious performance, in which abysmal defending at one end was rivalled only by the lack of bite at the other. Newcastle keeper Steve Harper made one save all afternoon - and a comfortable one at that - while the Magpies were generously afforded one free header after another.

In the middle of the park the likes of Jack Colback and Grant Leadbitter had no answer to the streetwise savvy and experience of Nicky Butt and Alan Smith - a point Keane was quick to make. 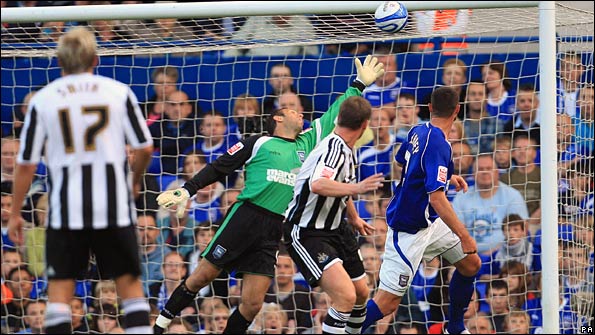 Kevin Nolan heads Newcastle into the lead at Portman Road

The Town boss was honest and forthright. You wouldn't expect anything else from Keane, but if he was inwardly seething then he successfully disguised his emotions.

Asked about the reaction of the crowd the Irishman defended their right to vent their fury. "They pay their money and are entitled to their opinions," he said.

Keane has been around the block and despite arousing interest from the assembled journalists by announcing that he would have to look at himself after this result (something he went on to suggest he did after every game), he seems determined to face his current challenge head on.

"We have our pride and it has been massively dented," he said. "It is all part of the challenge."

Keane pointed to some poor defending and talked of a need to execute the basics of football. He suggested his team are now suffering from a lack of confidence and when I asked what he can do about that problem he readily admitted that there are no magic wands. He said that a victory and a bit of luck along the way might help to restore a quality that is often easily lost but difficult to find.

Brittle confidence was why Keane felt it was crucial his team scored first. Three Newcastle goals in four first-half minutes put paid to that plan and provided an object lesson in the difference between a buoyant team and a struggling one.

Both started the season with hopes of promotion and many observers could have been forgiven for suggesting Ipswich were the better prospect.

Keane had won his two games in charge after his appointment towards the end of last season and had a full summer to mould his squad. Newcastle were relegated from the Premier League against a backdrop of boardroom and managerial uncertainty that still engulfs the north-east club.

Yet Newcastle are now two points clear at the top of the Championship and increasingly look like they can stay the distance. When discussing Ipswich's problems, Keane emphasised that what really matters is what happens on the pitch. Extend his point to Newcastle and there can be no doubt that despite the loss of several good players the Magpies have enough quality to deliver results.

Furthermore, suggestions that caretaker boss Chris Hughton - Championship Manager of the Month for August - was not up to the job look increasingly unfounded, while the side look to have everything that Ipswich currently do not - solidity, confidence and creativity.

The Toon might not have looked too flash in their recent away games at Cardiff and Plymouth when Hughton opted to play just one striker but the combination of Nile Ranger and Andy Carroll - two physically impressive young forwards - were certainly a handful at Portman Road.

I spoke to a delighted Kevin Nolan after the match. The attacking midfielder scored a hat-trick to take his tally for the season to six and, match ball in hand, he talked of his relief that the team had started the season well.

"The lads are breathing confidence now because of the start we have had," said Nolan.

"We knew it was going to be hard work after relegation last season and we were willing for the challenge. We always knew we had enough quality in the squad but it was about fulfilling that potential. We have got to keep our feet on the ground to continue to do it throughout the season."

I don't think Ipswich have the quality and, crucially, the experience in vital areas that Newcastle possess. Nonetheless, had they got themselves up and running on the opening day at Coventry - a game they could easily have won - they might be in a very different situation now.

Instead, Keane is the man with all the unanswered questions at the moment and the only fond memories Ipswich supporters will take from the game will involve the emotional and moving remembrance of Sir Bobby Robson.

Robson, of course, managed both clubs and the day was a poignant celebration of his achievements. 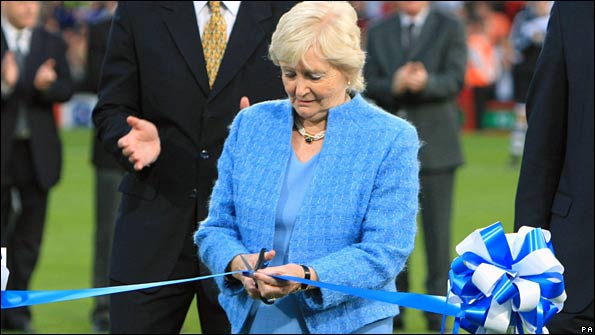 There were wonderful scenes inside Portman Road as the minute's applause took place before the game and during the renditions of Abide With Me and My Way. I can only speculate as to what Dame Elsie felt as she made her way to the middle of the pitch at half-time for the official renaming of the North Stand as the Sir Bobby Robson Stand. Immense pride I would hope at a much-missed man.

It was the sort of occasion that does funny things to the hairs on the back of your neck. I think it is a wonderful thing that the bonds football can build and foster can create such strong emotions.

I would hate to speculate as to quite what Sir Bobby would have made of Saturday's result. As with the contrast between the Ipswich and Newcastle fans at the end, it might have been another case of mixed emotions.

You can follow me throughout the season at twitter.com