Sheffield Wednesday chairman Lee Strafford is nothing if not stimulating company.

The 37-year-old pulls the conversation in one direction, then ensures it veers off in another. His chunky gold watch catches the light as he leans forward to underline his latest point, while there is a genuine passion in his south Yorkshire accent as he outlines his vision for the club. Several times during our conversation I found myself struggling to keep track.

Building the Wednesday brand, understanding how football can embrace technology and the internet, communicating properly and transparently with the club's fanbase and persuading the right investors to come on board - for a man who describes himself as an "L-plates" chairman, he is brimming with ideas.

But what is he all about and can he repair the damage that the tired Championship club has endured during a turbulent few years?

There is no question that Strafford, who officially became chairman of The Owls on 7 January, genuinely cares about the club.

He saw his first game as a 10-year-old, standing in the north-west corner of the Leppings Lane End. He cannot remember the opponents but he does remember Andy McCulloch scoring. Whatever the details, Strafford had seen enough to be well and truly hooked.

Being both chairman and a huge fan can be a problematic situation. The love for a club can cloud the steeliest businessman's judgement, with sentiment creeping into the equation just when tough decisions are required. Strafford is confident he addressed this when he brought in Nick Parker, who is now The Owls' chief executive.

"I needed someone who was not tainted by being a football fan - that was the weak element of my CV. I was too close," Strafford told me.

Strafford does not draw a salary or have an office at Hillsborough. He describes himself as a volunteer worker. Parker, in contrast, is in charge of much of the day-to-day running and is in a full-time professional position. 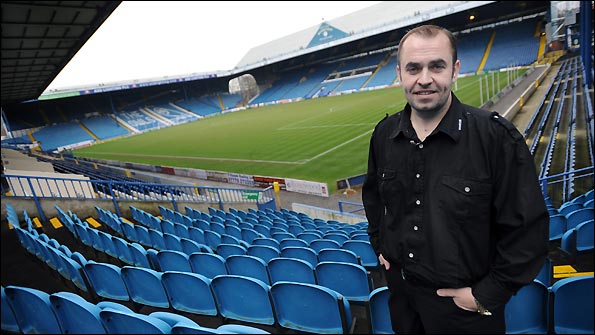 Even so, both have a business background. Where is the football expertise?

There is pleasure in Strafford's voice when he talks about Howard Wilkinson. The 65-year-old took The Owls back to the top flight during a five-year spell as manager between 1983 and 1988 and the chairman clearly has huge respect for him. Two days after he became chairman Strafford brought in Wilkinson as technical advisor. Strafford calls him the third spoke in the Wednesday wheel and is confident he has the perfect man to help him and Parker develop the right infrastructure to take Wednesday forward.

Bringing Wilkinson back to Hillsborough also went down well with the Wednesday fans. Strafford obviously places a lot of stress on bringing the fans back on board after a few years in which they had turned against the previous administration and become deeply disillusioned.

He is guarded when he discusses the people who ran the club before him, the "old guard" as he puts it. Strafford says he is grateful that they stood aside and let him and Parker come in to try to drive the club forward. But he will say this: "Too many things had gone too far.

"We ended up with a situation where the relationship between the club and the fans was problematic beyond what you would expect as a consequence of the club no longer being in the Premier League."

As an example of how certain decisions alienated supporters he points to one towards the end of the 2007-08 season to increase season ticket prices for the following campaign even though the club was not certain of avoiding relegation.

I liked what Strafford had to say about the relationship between a club and their supporters. It is like he wants to treat them as adults whereas sometimes clubs still think they are children.

"Football clubs have to be a lot more honest because the fans know a lot more than they did 10 to 15 years ago," added Strafford.

"People are walking around with Blackberries and iPhones and accessing information over the internet. That touch-paper has been lit and there is no putting it out."

Strafford talks about "fixing the Sheffield Wednesday family", making supporters proud to be a part of their club once again. He sees the shirt sponsorship deal with the widely respected Children's Hospital in Sheffield as something that can help this process.

"The instant we announced we were gifting the shirt sponsorship to a hospital that has touched so many people in the south Yorkshire area, it was something that was an antidote to the pain we are carrying through our veins as Wednesday fans," said Strafford.

The chairman draws parallels with Aston Villa shirt sponsor, Acorns Children's Hospice Trust. Villa is a club that Strafford thinks Wednesday can both learn from and emulate. He clearly has a lot of respect for American owner Randy Lerner and if you speak with Strafford for a while it soon becomes obvious that he has a good knowledge of American sport and the way their sport franchises work.

For several years Plusnet, the internet service provider company Strafford founded, was majority owned by a business in Pheonix, Arizona and he spent a lot of time in the US. The Owls chairman believes that many basketball and baseball franchises went through a process in the 1980s and 1990s that football clubs in England need to embrace if they are to grow.

"There are big parallels," he said. "We are just going there now but on the other side are family-friendly stadiums and good community programmes that engage the entire fanbase.

"Too many clubs have sat on their laurels and expected the fans to turn up but the world has moved on."

If Strafford's plans are successful there will be a lot more of an American influence at Hillsborough over the next few years. He is actively looking for investors and has targeted the American market. Investment bank Inner Circle has agreed to help The Owls find a consortium or a wealthy individual to put £20m into the club. Strafford beams when he talks about Inner Circle, which is apparently extremely choosy when it comes to selecting its clients.

The plan is that the £20m will not be used to clear the club's debts, which are actually more than £20m but apparently under control after negotiations with the club's principal creditors. Instead it will be used to help the club grow and develop. 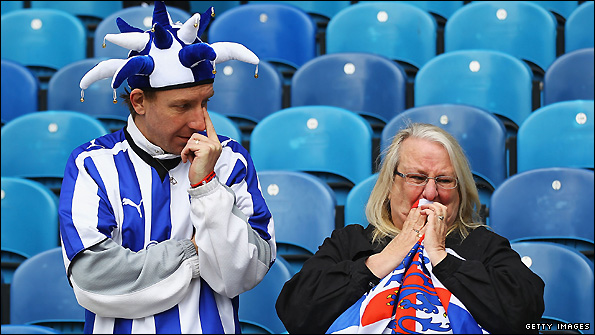 Strafford talks with great enthusiasm about the huge potential for growth at Wednesday and you can see his point. It is a club with a long tradition and history, a sizeable fanbase and a big stadium. He wants to steadily bring supporters back to the club, which will in turn increase revenue and allow more investment in the team.

"When you look at the things we want to do they are credible - it is not as though we are saying we are going to be playing Champions League football in three years," he said.

Obviously actually finding an investor is crucial to all this - a process that the chairman is confident will happen but one he admits has been more difficult than he initially anticipated.

The investors, in theory, will remain in the background but make money because the club is making money and Strafford will remain as chairman to steer the club towards a return to past glories.

But why is Strafford, so inexperienced in the world of football, confident that he will be a success as chairman?

The chairman built the technology company he eventually sold to BT from scratch, shortly before he become more actively involved with Wednesday and he describes it as a fast-moving business, with a high turnover of staff and a product line that changed ever year.

"Football is less complicated than the technology sector and not as fast moving as I would like - and that is one of the opportunities," he said.

Strafford talks in terms of "talent workers", both the people who deal with the running of the club and the football staff - and is confident he can create the structure and the environment that will allow them to succeed.

He also has plenty of ideas in terms of how the internet can help the club grow. Some seem obvious, like the new ticketing system that comes into effect on 14 July (Strafford describes this as the day when his club finally enters the 21st century). Others, such as community-focused learning platforms that can be accessed through the club's website, sound more ambitious. Perhaps in this regard other chairman without his grasp of technology and how it can help a club grow are at a disadvantage. Strafford certainly seems to shares this view.

I was left with the impression that Strafford loves to work. He jokes that he spends so much time trying to realise his vision for Wednesday that his wife is always threatening to divorce him. He is constantly in touch with manager Brian Laws as they look to develop the playing staff as well as the wider running of the club.

When I asked him what he does in his spare time he replied that he does not have any. If he wants to watch a television programme he views it on-demand at a time of his choosing. He operates very much in the modern world, in tune with technology.

As our time drew to a close I thanked Lee for his time, fearful of the hours it would take to transcribe his thoughts. "No problem dude, any time," said Strafford.

The last time I heard anybody call someone dude I was watching The Big Lebowski. Without question, Wednesday have an interesting man at the helm.

I guess only time will tell whether his philosophy will bring about a renaissance at Hillsborough but I would love to hear the views of any Wednesday fans about the man now running their club.