Sweet success for Jackson and Stimson

Like a seagull caught in a squall far out at sea, Gillingham striker Simeon Jackson spent most of Saturday afternoon blown badly off course.

Plenty of the build-up to the League Two play-off final had focused on the Canadian's burgeoning reputation and his 20 goals this season. He was touted as a matchwinner.

But, try as he might, for most of the final against Shrewsbury the 22-year-old seemed unable to make any sort of impact.

He failed to make a clean contact with the few shooting opportunities that came his way, had little change from Shrews defender Graham Coughlan in the air and was often frustrated with his attempts to link play with his team-mates.

When I looked back over my notes from the match there was nothing that Jackson would have remembered fondly - until the very end.

For having refused to yield to an afternoon that was not going his way, Jackson finally found himself in space as Josh Wright swung in a 90th-minute corner and showed great skill to head the ball past the despairing effort of Shrews defender Neil Ashton and into the top corner.

It was a very difficult header to execute because the ball was slightly behind him but he showed enough flexibility and instinct to adjust his body shape and find the net.
Job done. Headlines written - and the previous 90 minutes consigned to an insignificant memory. 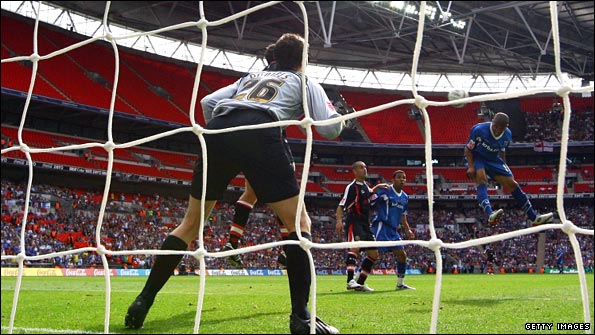 Such is the life of a striker - not that Jackson is just any old forward. He might not be particularly tall or powerful but his story is one that hints at a steely determination to succeed

Jackson left his home near Toronto at the age of 15 to try to make it as a professional in England, but all did not go to plan.

He had been spotted in Canada by a Gillingham scout and arrived in England with a deal arranged with the Kent club. Unfortunately for Jackson they released him after a matter of months.

It was a difficult time for the youngster, who was living with an aunt in Croydon. In addition to the hammer blow of being cast aside by Gillingham, he didn't particularly like the food in England and found that some people laughed at his accent. Lesser men might have quit, but not Jackson.

He had trials at various clubs, played for the likes of Dulwich Hamlet and Roehampton and finally earned a deal with Rushden & Diamonds.

While at Rushden he had a brief trial at Manchester United and although that did not work out it strengthened his resolve. His form for the Diamonds eventually earned him his move to the Gills in January 2008. Their initial error in releasing him cost them £150,000.

Jackson has handsomely justified the Gills investment but he hasn't won everybody over yet. Some supporters still harbour reservations about him and one local Gillingham newspaper this week suggested he was too lightweight.

Gillingham boss Mark Stimson, reflecting on Jackson's winning goal, said: "I hope they give him some credit now.

"He did not have the best of games but when the opportunity came up it was not luck that he was in the right place.

"Simeon is a big game player."

Jackson proved that when he scored in an FA Cup tie against Aston Villa earlier in the season.

And having now notched the winner at Wembley comes the inevitable question of whether the striker will still be a Gillingham player next season.

"I have honestly not had one phone call about him," said Stimson. "Managers have watched him, probably since the Villa game, but some might think that he needs another year. He can be a big player for us next season."

If Jackson's football career has been far from straightforward, then the same can be said of Stimson's tenure as Gillingham manager.

He arrived at the club from Stevenage in November 2007 with a track record of success in non-league football having won the FA Trophy for three consecutive years.

The 41-year-old made plenty of changes at the Priestfield Stadium, bringing in several players from non-league such as Dennis Oli and the brilliantly named John Nutter, but he could not prevent the club from slipping to relegation.

The current season did not start convincingly - the Gills lost 7-0 at Shrewsbury in early September - and difficult questions needed answering.

There was a rift in the squad between the senior players he inherited and the young, hungry professionals he brought to the club.

After a 3-0 defeat to Exeter a fews weeks on from the Shrewsbury debacle Stimson replaced Andrew Crofts with Barry Fuller as captain.

"There have been some big decisions made at the club," said Stimson after the victory at Wembley. "The 7-0 hurt, relegation hurt more than you can imagine.

"I made a big decision in leaving the old captain out and we have a captain now who wants to win matches and move the club forward."

There must have been moments of doubt for Stimson as he battled against factions that opposed his philosophy of success through hard work (his decision to start pre-season on 1 June was not universally popular) but he took heart last summer from a conversation with Keith Peacock. A former Gillingham manager, Peacock likened relegation to a boxer taking a count of eight and asked how the Gills boss was going to react. Stimson resolved to climb off the canvas. 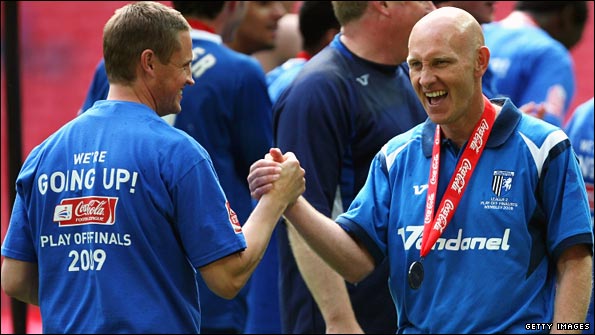 Listening to Stimson it is obvious that he is a mentally strong man who is driven to succeed. Less than an hour after victory he was already talking about meeting a midfielder he wants to sign and looking forward to next season. He hasn't taken a holiday in three years and does not expect more than four or five days away with his family this summer.

Stimson has carried out major surgery at the club and victory on Saturday was vindication of what he has done.

And there is no doubt that his team deserved to win. Shrewsbury manager Paul Simpson was honest and big enough to admit that.

Gillingham played attractive, ambitious football, with Oli and Andy Barcham very lively in wide positions while Josh Wright and Curtis Weston were clever and creative on Wembley's lush new turf. Shrewsbury improved after the break but the team from Kent could have secured victory far earlier than Jackson's late winner but for the form of goalkeeper Luke Daniels.

In truth - and despite the dramatic finish - it was a slightly disappointing spectacle, particularly during the opening 45 minutes, and I hope that Sunday's League One final is a little heavier on goals and entertainment.

Not that Gillingham fans will be in any way bothered. As I left Wembley a couple of hours after the final whistle a few of them were still around the stadium basking in their glory.

I was slightly confused, however, by the sight of loads of middle-aged women wearing Kim Wilde and Rick Astley T-shirts.

It turned out the aforementioned stars of the Eighties were playing a concert at Wembley Arena on Saturday evening. I doubt whether Jackson has even heard of them and they don't strike me as Stimson's cup of tea either.

Gillingham's celebrations are one of a club moving forward not reflecting on the past.