For many years, Charlton were regarded as one of British football's finest examples of a well-run club.

Despite their relatively modest size, they had became an established Premier League side with a rebuilt stadium, excellent links in the local community and a sound balance sheet.

They finished the 2005-06 Premier League campaign in 13th place, just two years after a remarkable seventh-place finish had seen them narrowly miss out on Europe. In one sense the 2005-06 campaign had been business as usual with Alan Curbishley's side picking up enough points early on to ensure there would be no panic in the closing weeks of the season.

But three years later the Addicks are anchored to the bottom of the Championship and seemingly destined for League One.

It is a sorry tale, breathtaking in its speed and a salutary lesson in the realities of modern football: it takes a lot longer to build something than tear it down.

But just what has gone wrong at Charlton? And at the end of this blog I want to know what you think has happened at the south London club.

To understand Charlton's problems, it is important to reflect on the 15 years that Curbishley had in charge at The Valley.

After a brief period yo-yoing between the Championship and Premier League, the Addicks won promotion back to the top flight in 2000 - and stayed there.

"The reason Curbishley did very well was that his recipe for maintaining stability was a good one," said Dave Rudd, a lifelong Charlton fan and a member of the club's fans' forum that meets regularly with the board.

"The team habitually reached 40 points (the tally usually regarded as enough to avoid relegation from the Premier League) quite early in the season. His teams picked off points against clubs likely to be relegated - often 18 came off the sides that ended up going down."

It was a successful strategy but with the points accrued so early in the season it left fans dreaming of Europe only to be disappointed by an almost annual loss of form after Christmas.

By the time of Curbishley's final season in charge some frustrated fans wanted to see a little bit more ambition. They had perhaps had too much of a good thing but - as my Grandma used to say - be careful what you wish for.

"Towards the end a lot of people got frustrated because it was a case of going to a club like Middlesbrough and playing for a draw, finishing 13th and doing it all over again the next season," said Rudd.

Curbishley himself was not immune to the groundswell of feeling that his era was coming to an end.

In a rare interview about Charlton to be broadcast on Football Focus on Saturday, Curbishley explains: "I felt it was perhaps time for everybody concerned that someone else should come in and carry it on. I did not see the prospect of breaking into the top six."

Goalkeeper Dean Kiely played 248 times for Curbishley. He puts it like this: "His time had run its course and there was a chance of going a bit stale."

And so before the final home fixture of the 2005-06 season against Blackburn, Charlton chairman Richard Murray announced that Curbishley, who was close to tears as he paraded around the pitch after the final whistle, would leave the club at the end of the season. 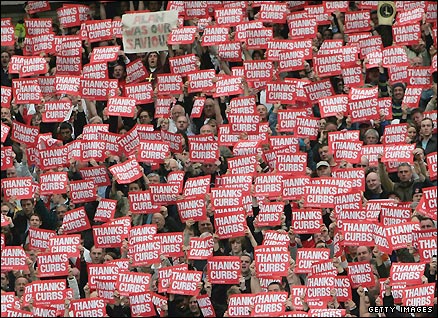 We are now in the third season since Curbishley's departure and the Addicks are onto their fourth manager.

Charlton's board faced tough decisions after Curbishley's departure and must accept their share of the responsibility. They had not been required to appoint a manager for 15 years and the man they had was prudent with the club's finances.

I think this is very important. For the club to show more ambition they would have to spend more money - and so it was imperative they appointed the right man as manager and gave him time to succeed.

The board brought in Iain Dowie, who had recently left bitter rivals Crystal Palace, and the recipe at Charlton changed. The solid, if somewhat predictable, fare under Curbs was replaced by a more ambitious menu.

"It's a great move for me. I'm aiming for the top half of the table and a European place," said Dowie, who spent more than £10m before the start of the 2006-07 season on the likes of Jimmy Floyd Hasselbaink, Djimi Traore and Amdy Faye.

It was big money by the Addicks standards but Dowie wasn't given long to mould his new-look team and found himself sacked in November after just 15 games in charge .

Les Reed was brought in to replace Dowie but he didn't last long either. On Christmas Eve he was replaced by Alan Pardew after only seven games at the helm. The club now insists Reed was only ever a temporary move, but they were not making those sorts of noises at the time.

Either way, Charlton were on their third manager of the campaign and as the calm of the Curbishley era gave way to instability and change it was no surprise that the season ended in relegation.

"Iain Dowie was given 15 games, which was disappointing, Led Reed six or seven and then another change was made," said Curbishley. "You look at some of the major decisions that were wrong.

"Being relegated is the biggest thing that has happened. Once you get relegated you have to bounce back or it becomes very, very difficult."

Money was raised by selling key assets such as the club's England internationals Darren Bent and Luke Young, while Pardew spent £12m bringing in the likes of Luke Varney, Izale McLeod and Zheng Zhi.

The season started promisingly with just one defeat in their opening 10 Championship fixtures but form fell away and the club finished in 11th. 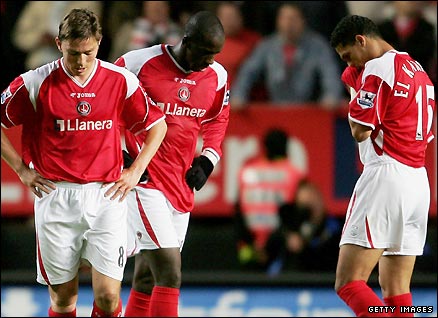 This season has been even worse, and Pardew was sacked in November 2008 after a 5-2 defeat by Sheffield United saw Charlton slip into the bottom three of the table. Pardew later admitted that he had not been able to turn around a club on the slide.

Rudd's take on Pardew is this: "Maybe one of his weaknesses is that he was good at buying good footballers but a manager has to hook it all together. We were not a good team."

Pardew's assistant Phil Parkinson was put in temporary charge and eventually given the job permanently despite the fact the team had picked up just three points in his eight games in charge.

Charlton's win over Crystal Palace on 27 January was their first in 19 games, a dreadful run which saw them tumble to the bottom of the table. Fans I spoke to struggled to understand why the team looked so poor. Clearly lacking in invention and confidence, the inclusion of a series of loan players did little to help add stability, with only the emergence of talented 16-year-old Jonjo Shelvey providing a rare piece of good news.

The attempts to both retain their top-flight status and then return immediately to the Premier League had taken their toll off the field as well.

The annual report for the 2007-08 season was released in January and revealed a loss of £11.5m. The bankrolling of players has come at a cost and the club's debt now stands at about £37m.

Murray, who declined to be interviewed for this piece, recently went public to deny rumours that the club are close to entering adminstration (they would be the first Football League club to do so this season if that was to happen). Murray and several directors have lent £14m to the club and cannot be accused of lacking commitment or a genuine desire to see Charlton flourish again.

However, they do not have the finances of football's true big-spending owners and the club held talks last year with Dubai based investment group Zabeel Investments about a takeover at the club. It came to nothing, as did previous discussions during 2007 with other potential foreign investors.

It all adds up to a depressing story of how things can spiral out of control.

Curbishley returned to Charlton as West Ham manager in February 2007 as both clubs battled relegation and left his former home with his tail firmly between his legs after a 4-0 defeat.

Only once has he been back in a non-professional capacity, on 8 February 2008, and he saw his old team defeat Palace 2-0. Curbishley left thinking they would reach the play-offs.

What has since happened to the club where he gave so much is a cause of great sadness for the 51-year-old.

"I have been shocked by the quickness," he said. "I don't take any pleasure out of having left a club in mid-table in the Premier League and looking at what has happened. I am devastated to see where they are now. I feel sorry for so many people who put so much work in."

Years ago Rudd remembers Curbishley pointing to Martin O'Neill's Leicester City as an example of a club Charlton should look to emulate.

The Foxes currently are on the cusp of bouncing straight back after relegation to League One. Barring something spectacular the Addicks might once again be advised to look towards the East Midlands club for inspiration.

So what do you think has gone wrong at The Valley? And how can Charlton go about putting things right?