Madejski right to hit out at wages

Reading chairman John Madejski once said that the best way to make a million in football is to invest 10 million, the suggestion being that for whatever reason the other nine disappears along the way.

It would be a fair assumption that the Royals chairman had players' wages in mind to at least some degree.

After all, as far back as May 2003 he opined from his luxury home: "There are three things wrong with football: players' wages, players' wages and players' wages. If you sort that out, you sort football out as far as I'm concerned."

As such I guess nobody should have been all that surprised when the 67-year-old recently told BBC Radio Berkshire that footballer's wages are "obscene". 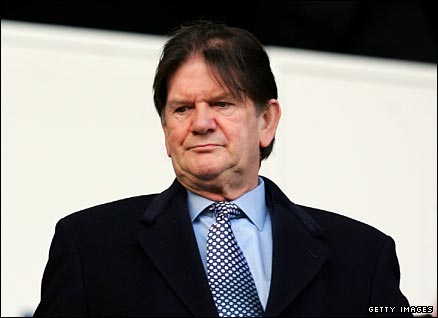 "I think players are paid quite enough already and they don't need to be as high as they are," said the man who made his substantial fortune as the founder of Auto Trader.

"I'm pleased they get good salaries - that's only right - but it's gone off the Richter scale."

I've spoken to a couple of Reading fans about this and I wouldn't say it was exactly the news they wanted to hear. They are more than familiar with Madejski's fiscal prudence and his theories on the salaries of his key assets.

What they what to hear is that most of the £8.5m raised from the sale of David Kitson to Stoke and Nicky Shorey to Aston Villa will be reinvested in the transfer market.

It isn't going to happen.

Reading received a parachute payment of £11m but Madejski reckons relegation from the Premier League cost his club £22m. What's more, he has made it clear that plenty of funds have been used in extensive "remedial work" on the stadium. Add to that the large squad of players at the club and reduced season ticket sales of 14,000 and the owner has a strong case for suggesting that the club need to "cut our coat according to our cloth."

I've been told that the staff at the club took a substantial pay cut as a consequence of relegation, while the cash raised from the sale of players will be used to underpin the deficit incurred as a result of Reading dropping out of the Premier League.

I think there is a lot to admire in a chairman running his club with a very definite eye on the bottom line. Football is littered with tales of boom and bust, ridiculous overspending and chronic mismanagement. Fans want to hear about exciting new arrivals, though surely not as much as they don't want to hear about their club entering administration.

But is Madejski correct when he suggests that the biggest problem in football is players' wages?

I have trouble computing the supposed figures involved in Frank Lampard's new contract at Chelsea. Can any sportsman be worth a reported £150,000 per week?

Some would suggest that football is now entertainment, not to mention a business of supply and demand. Footballers are the stars of the show, the reason people pass through the turnstiles and buy replica shirts and all the other merchandise that is now available, and if a club is generating huge sums of money as they mine ever-expanding markets then why shouldn't players be paid their slice of the pie?

And to an extent I think the aforementioned argument holds water. The top players in the Premier League are the faces of global brands, superstars. Whether they are cosseted, pampered and spoilt with no idea of what it is to be a normal human being is another argument entirely.

But what about wages in the Football League?

I would be absolutely staggered if there were no footballers in the Championship earning at least £20,000 per week - just over £1m each year.

You could argue that if your club brought in a top player who made the difference between promotion and a near miss, then he would certainly be worth every penny of a £1m a year contract. But how many of these are there in the Championship? Not many.

And as I have read story after story over the summer months of managers talking about their frustrations in the transfer market because players are waiting on deals, hoping something better will come along, it underlines the belief that for most footballers, or their agents or a combination of the two, cash is a prime motivation. Yes, footballers have short careers and must look after their own interests, but the relationship between club and cash is one that often ruptures a player's loyalty.

Looking at the bigger picture can it really be right that a footballer in the second tier of the English game earns so much for playing football when so many other people in unquestionably important professions, people who save lives, or educate children or serve the public in so many other ways, earn a pittance in comparison? It is part of the reason why my Dad no longer bothers to watch the team he supports, the price of admission being another key factor. The argument sounds a bit worthy but that doesn't mean it isn't right.

I think Madejski is right when he says that salaries have gone off the Richter scale. Do you?