This week I think it's best if you settle in to the podcast this week with a cup of tea.

On Outriders we've heard from lots of people who have shaped the way we live and work with machines. This week, I have been talking with a whole group of people who were responsible in a lot of different ways for the methods and programs that are used when we work with computers in business.

When you think about old business computers, you may be reminded of IBM, the International Business Machines Corporation, but if you live in the UK, you might want to consider that nice cup of tea again and for some of you, that might mean remembering the Lyons company and their tea houses.

Not all that long ago, but certainly before every high street had a big brand coffee shop on it, Britain was home to a company that ran tea houses. Beautiful old places with waitresses in uniforms and nice drapes. But to run such a thing required many more people, to run the shops, supply the, bread for sandwiches. A veritable business empire.

All this and more was in the history of Lyons, that and one of the first payment systems that made sure that every member of staff from delivery driver to manageress got their wages on time. That system was run on a computer and that computer was LEO (Lyons Electronic Office).

This month sees the 60th anniversary of the world's first business computer. It was modelled on the EDSAC and the people who worked with that machine made computing history. I was lucky enough to talk to Ernest Kaye who joined Lyons in 1949 to work on LEO circuit design and relaytechnology. He is now the only surviving member of the original LEO design team of four, John Pinkerton, E H Lenaerts and David Caminer. We had a cup of tea and talked about what it was like to make history. 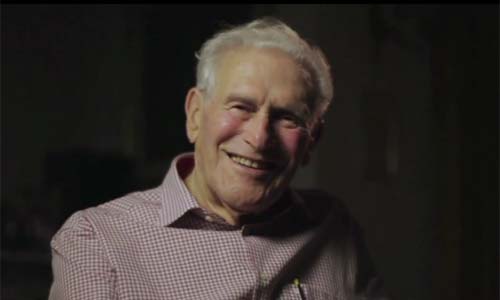 Ernest Kaye. Photo: Google The people who were working on LEO had no past examples to turn to, no handy online programming library. Imagine making those rules as you went along. Well, Mary Coombs (nee Blood), Ralph and Frank Land and John Aeberhard kindly lent us their time to talk about working with genius and making new rules.

If I had a time machine, I think you can guess where I would go first at the moment. A huge debt of thanks to Ernest, Mary, John, Ralph and Frank for sharing their memories and for helping everyone who hopes to get paid on time today. Thanks also to Lynette Webb who introduced me to all of them.

More Outriders next week and in the mean time there's a number of ways you can reach me if you would like to get in touch. You can email me at outriders at bbc dot co dot uk, find us on Twitter as @BBC_Outriders of search Facebook for Outriders where you can find updates and the odd discussion about what happens while we make this segment.

Outriders is BBC Radio 5 live's programme dedicated to exploring the frontiers of the web. It is broadcast on Tuesdays at 0300 in Up All Night.

You can stay up to date with Outriders via these feeds.

About Pods and Blogs