Sledge hockey: The crash bang of wheelchair rugby, with ice 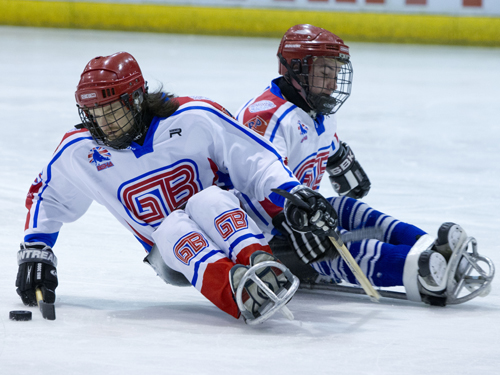 What is sledge hockey? And why should we be rooting for Team GB to qualify for the 2014 Winter Paralympics?

"It's the disabled version of ice hockey," says GB sledge hockey goalie Rob Gaze. "Most of the rules are the same, except obviously most of us can't move our legs."

He started playing the rough and ready disability sport after a spinal injury eight years ago. Click the above play button and you can hear in his voice how much he loves it. Gaze was speaking on the Ouch! talk show for April.

The goalie says: "We sit in a little chair, which is strapped to a frame, which has skates on the bottom. And we use two sticks rather than one. They're about a quarter of the length of normal hockey sticks but have the same shooting head on. They have [ice] picks on the bottom so we can push around the ice."

Comparisons are made between sledge hockey and wheelchair rugby. People were shocked and delighted during the London Paralympics on the hitherto unlikely sight of disabled people being turfed out of their chairs onto the court. Sledge hockey is similar because of the speed, the contact and the number of injuries received during play.

"You can't start fights otherwise you're going to get sent to the sin bin and you can't punch people," says Gaze. "But there's nothing wrong with you going in with your shoulder into somebody and knocking them flat off their sled.

"If they've got the puck, rather than going for the puck, you try to take the man away." 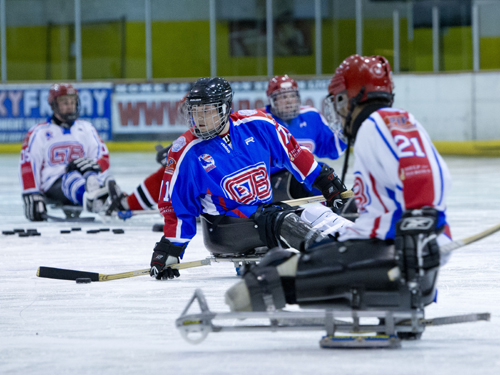 The GB sledge hockey team describe themselves as "underdogs". According to Gaze, this is a status they like. They surprised everyone recently by winning bronze at the world championships in Japan and it has earned them a place at the final tournament later this year. Winning a bronze there will mean they qualify for the 2014 Winter Paralympics in Sochi, Russia.

So, will they make it? Gaze says: "I'm a bit nervous but yeah we can do it. We push ourselves harder every time we go out, and people have started taking notice. So there's not much more you could want."

Rob Gaze was interviewed on the April episode of the BBC Ouch! talk show.