Who knew? Cartoon advises disabled should take tights off before a "bum shuffle" 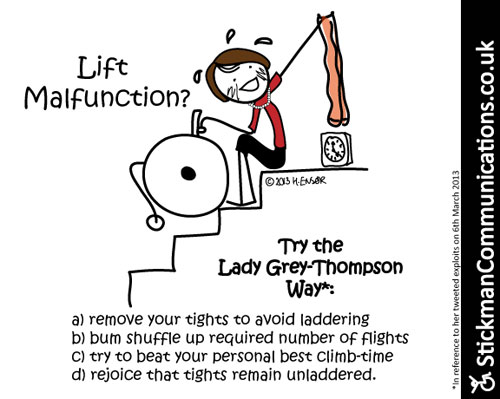 On arriving home late and discovering the lift in her building was broken, the disabled Baroness had to crawl up ten flights of stairs to her London flat, dragging her chair up too. The retired Paralympian tweeted during the ordeal that she would be removing her tights beforehand, so as not to ladder them.

The cartoonist liked the disability detail: "Take your tights off before you bum shuffle. That's Something," Hannah says, "that's so real to my world but alien to other people's worlds. Noone tells you that as a wheelchair using woman."

Tanni was so impressed with Hannah's image of her on the stairs, that she asked permission to link to it from her own website.

The 31 year-old from Oxfordshire hopes that this, and her other cartoons which all have insights into disabled life, will encourage everyone to view disability as "normal".

"I keep them simple," Hannah says about her cartoons, in which people are always drawn as stick figures, "and I use them to say what's in my head."

one cartoon that she now sells as a sticker, depicts Hannah on the floor after attempting to get up a kerb that proved too high.

"[Non-disabled people] will see my sticker and understand why I like little kerbs," Hannah says, "and a wheelchair user can say yes, this is my life, I've done that, and I've also done the cobblestone backflip." 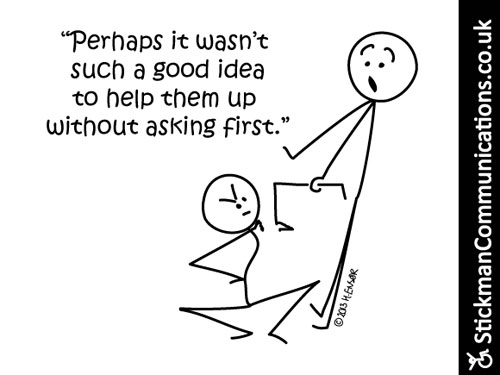 Hannah's first series of stickman creations, the surprisingly named You Know You Have Hypermobility Syndrome When ..., helped her communicate at a time when she was too ill to speak. They reflect her life with the painful condition which makes her joints dislocate easily and often. Her other disability, POTS, causes her heart rate to rise too high when she stands up.

In 2010, she stopped working as an environmental health officer when an independent advisor confirmed she was unlikely to be fit for work again before retirement age. Since then, she's been devoted to drawing when she is well.

The cartoons started life on disability forums and on Hannah's blog. She sells disability awareness stickers and communication cards and has also published seven stickman books, including two for small children. Money raised from these goes to her favourite charities, the Hypermobility Syndrome Association and Whiz-Kidz. 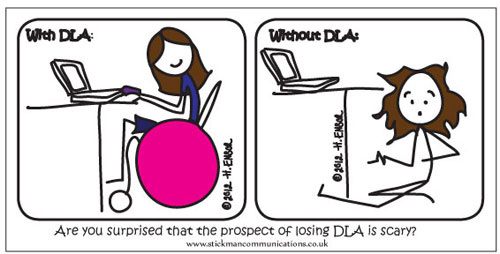 The cartoon above is Hannah's response to changes to disability benefits. She was keen to take a gentler approach than other protests she'd seen online.

"On Twitter and Facebook, I'd noticed not only fear but a lot of hatred. Some of the arguments being put out against welfare reform came across as very bitter and very angry," says Hannah. "I know that if someone comes at me sounding bitter and angry, I automatically shut up and don't get the point they are making, even if they have a valid point. So I just wanted to say look, the Disability Living Allowance is important - without any anger and bitterness."

Hannah worries that the lives of some of the disabled people she sees online have been "swallowed up by the politics".

"I see people becoming so scared about [welfare reform] that for some it has become their whole world. That's sad because there are so many things to be enjoyed.