Sex will cure your stutter 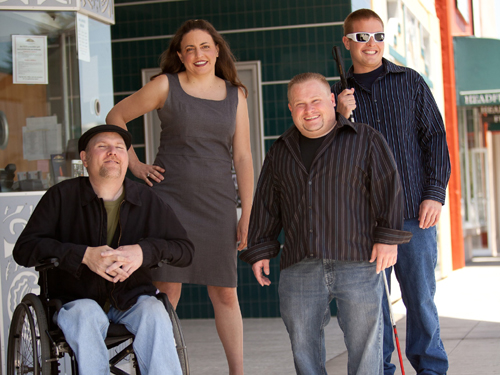 Disabled children should be "put down" to save money, went the unfortunate dark joke from a councillor in Cornwall.

Much reported at the end of February, we brought it it up in our monthly talk show and it sparked a lively discussion about the most awful things people have ever said to you about your disability. A classic pub conversation if I've ever heard one -well, either that or the stuff of a tribunal.

On the line from Memphis, and taking part in the chat, were Nina, Eric and Steve from San Francisco Bay comedy troop the Comedians with Disabilities Act.

Presenters Rob Crossan and Liz Carr had already discovered that people often ask Steve, a person of restricted growth, if they can take photos of him. You can imagine it would be a tad frustrating and bad for the self esteem that someone wants to keep a record of your non-standard looks so they can show it to their pals later.

Then it was Nina's turn: "I've gotten men, especially after some of my shows, saying, "You know I think I could help you with that stuttering."

Rob asks what therapies they might be thinking of as an unspoken realisation dawns on where this may be leading. "Have you taken them up on their offers?" enquires Liz.

"No!" says Nina. "Well the guys who have asked me haven't been ones that I would want that from,"

Mmm. Readers, can you guess which direction this is headed?

"Do their suggestions involve dragging you back to a cheap motel?" presenter Rob puts into words what everyone is now thinking.

"Yeah," confirms Nina, and I'm not quite sure how to say this in a clean way ... they have implied that somehow sexually they have the power to cure my speech."

• The Ouch! disability talk show is available monthly and full of surprising conversations. It's available as a podcast, a download or to stream on your computer, your phone and other devices.