Artist goes to bed in public to raise disability awareness 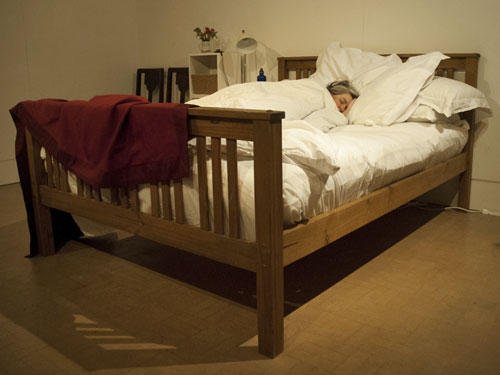 When Liz Crow is out and about, she adopts a strong public image. But when at home, she has to lie down, cave-in and totally relax. She calls this her "bed life".

"I go out there and try and be all energetic and busy and doing things", says Crow. "But then I come back and have this kind of hidden self where I switch off, spend a lot of time lying down, a lot of time in bed recovering."

She is not alone. Many disabled people have fluctuating conditions which are painful or energy-zapping. Lots hide the bed recovery aspect of their lives from others for fear that they won't be understood.

Previously, Crow hid her most-disabled self from others in case they saw it as "not socially acceptable". But in April, this part of her is set to become very public.

She will lie in bed for 48 hours as a human exhibit at Salisbury Arts Centre in mid April. Crow thinks the time is right to have an open conversation about the hidden life she and others have.

"There's a pressure", she says, "particularly after last summer and the Paralympics, to be a kind of super human when you're in public. And if you're not that, if you're a [benefits] claimant, then you're often cast as a scrounger.

"What I'm trying to do is to find that space in the middle where we just acknowledge that life is more complicated."

During the two day sleep over, Crow will invite visitors to join her for five scheduled bedside chats about disabled life. One of the discussions will be held on Twitter and via SMS text.

"Last time I did it," she says recalling a performance in Ipswich in November, "I was contacted by quite a few people who said 'this is great, thank you for making me visible. I'd really like to be there and visit but I have my own bed life and so I can't'."

The original version of Liz Crow's performance was only for those who walked in off the street; the new Salisbury performance will have a much wider audience as it will be streamed live on the web. A #beddingout hashtag has also been running for two weeks on Twitter and already there's a community of people with bed lives of their own springing up around the project.

The artist admits she has been surprised by the amount of feedback she's had and is keen to connect people with one another: "I had no idea that there are actually thousands upon thousands of us out there living this kind of life, because we are really isolated and we are really invisible in public life."

• The Bedding Out installation is at Salisbury Arts Centre. Liz Crow will be bedding down 'live' between 10-12 April.