The Great Disability Scam, as told by Kate 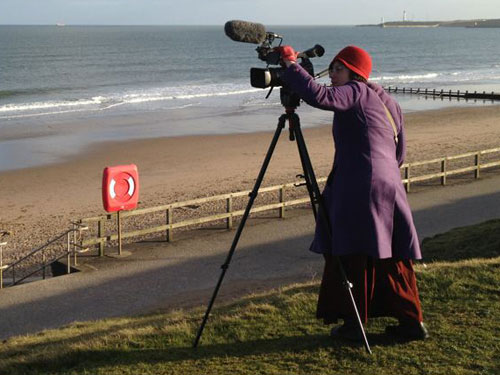 TV producer Kate Ansell is disabled and was part of the team who made tonight's Panorama: The Great Disability Scam? Here she mops up a few facts that didn't make it into tonight's programme and gives her personal view based on the team's findings.

Tonight, a Panorama investigation into government efforts to get disabled people back to work broadcasts on BBC One. I co-produced the film, which examines how effective the government's controversial Work Programme has been in getting Employment and Support Allowance (ESA) claimants back to work.

The figures are pretty stark: out of 68,000 ESA claimants placed on the Work Programme since it began, only 1,000 have found jobs lasting three months or more, a total well beneath the government's already not-very-ambitious targets for this particular group.

The question is why are they so low?

During the course of research, the team and I spoke to dozens of disabled people who would love to work but feel they aren't well enough at the moment, but also to others who feel they can and do want to work, and just need support working out how to do that accessibly and sustainably.

Like most disabled people, I could tell you a thing or two about barriers to the workplace. Yesterday, for instance, I found myself prostrate on the floor of an edit suite attempting to do physiotherapy discretely so as not to freak out any of my non-disabled colleagues, while calculating the precise dose of painkillers and anti-spasmodics I could take without losing the power of thought.

Even before this week, an alarming proportion of research for this film was conducted by me, from bed, in my pyjamas, on days when getting dressed seemed like too much trouble. On occasion over the last few weeks, I'd glance at all my paperwork and get confused about which of the DWP documents in front of me were for research, and which ones actually related to my own life.

As a working disabled person, I'm not quite in the minority, but only half of all disabled people in the UK are in employment, a fact which makes me want to weep every time I hear it. Meanwhile, there are two and a half million people claiming benefits because they're too ill or disabled to work, at a cost to the taxpayer of £13bn a year, a fact which is routinely thrown around and makes disabled people feel bad about themselves.

The government has pledged to get those people back to work. Over the past three months the team and I have met many of those people - disabled people who'd love to work if they can, but either feel the workplace is not appropriate for them at the moment, or need additional help and support to overcome the barriers presented by their impairments.

The Work Programme is part of the government's answer: a £5bn scheme aimed at helping long term unemployed people back to work. Clients are referred to private companies who take responsibility for preparing them for the workplace. They're only paid the lion's share of their fee for doing this after they have successfully found sustained employment for that person.

The companies get paid higher fees for people considered harder to find jobs for - almost all the people in that harder group are ESA claimants.

The idea is that the private sector takes the risk and pays its money upfront: it's a good deal for the taxpayer, as well as life-changing for the participants. It sounds great in theory ... but in practice?

The Royal National Institute of Blind People (RNIB) have looked at the figures and say that so far no blind people have got sustained employment through the Work Programme. This was telling as we'd also interviewed Jemma Brown, who's blind and has been on the Work Programme since March last year.

Jemma has been placed with A4e, the second biggest company involved in delivering the programme. She told us of her frustrations with the service she's been offered, including failures to provide her with large print materials on courses, or to offer her accessible technology in their offices. A4e told us they take complaints incredibly seriously and are already working with her to resolve these problems.

Steve Winyard is Head of Policy at RNIB. His view of the work programme is that it's been a "disaster" for blind people. This might be the kind of thing you would expect him to say when faced with those figures, until you realise that the RNIB Group is itself involved with the work programme.

The big companies involved with the programme, like A4e, can subcontract their clients to other organisations. There are thousands of subcontractors, including hundreds of non profit organisations with disability expertise. The RNIB Group is one of them and has a long track record of supporting blind people into employment. So far, the group has only had 62 people referred to them through the Work Programme, doesn't get paid much for this until people find employment, and meanwhile has invested thousands of pounds in bidding for and providing the expert services.

Unsurprisingly, Steve believes this is no longer sustainable for them.

To find out how widespread this experience was, Panorama conducted its own survey of all 348 voluntary sector subcontractors to the Work Programme listed on the DWP website, and discovered they were far from unique in their concerns.

When you meet as many disabled people desperate to work and struggling to have their needs met as we have over the last few months, you do wonder why this is the case. The answer might be money. Simply, disabled people are expensive. A provider will get paid a one off "attachment fee" of £600 when they take on a client who's on ESA. If they refer them to a subcontractor, they have to give a percentage of that fee away to them, as they do if the client successfully gets a job.

Many of the subcontractors we spoke to told us they felt the main providers were reluctant to refer for that reason. And, as Anne Begg, Labour MP and chair of the DWP Select Committee currently looking into the Work Programme pointed out, "If they are expecting to get, say, £5,000 from the government for getting [someone] into work but.. spend £6,000 on that individual getting them into sustained work, then that is loss-making for the company."

We spoke to someone who used to work for a private company, Triage, a large Scottish company which specialises in support and training for unemployed people, and says on its website it has one of the highest employment success rates in the country. It also delivers the Work Programme in some parts of the UK.

She says she heard some staff refer to clients as LTBs - which stood for Lying, Thieving Bastards.

She told us that clients were routinely "parked" if they were too difficult to help - efforts to find them employment effectively stopped. She also says she was advised against asking clients on disability benefits how they are, because it would take too much time.

We put these concerns to Triage. They told us, regarding the phrase LTB: "this is not a phraseology used or accepted by Triage. We believe this relates to a single incident, apparently almost a year ago."

In relation to not asking clients how they are, they said: "this is a misinterpretation of a constructive approach to positively working with Health Benefit clients...We have found more effective ways of greeting a client...without using words that may refocus them on their health concerns."

On the issue of parking disabled clients, they told us: "Triage's delivery structure of the Work Programme does not allow for `parking'."

Dame Anne Begg has said she will be feeding Panorama's evidence into the ongoing inquiry into the Work Programme.

Employment Minister Mark Hoban told us: "I've got relentless focus on ensuring that the Work Programme delivers to the people who take part in it. I want to see this programme get more people into work."

Personally, I really want him to be successful in his mission to get disabled people into work. All the disabled people I know want to work, and would welcome help to find a way into employment. I'd like it if they did. It might be a bit easier to do stealth physio in the workplace if there were some more of us around.

Panorama: The Great Disability Scam? is on BBC One, Monday, 28 January at 20:30 GMT and then available in the UK via the BBC iPlayer.