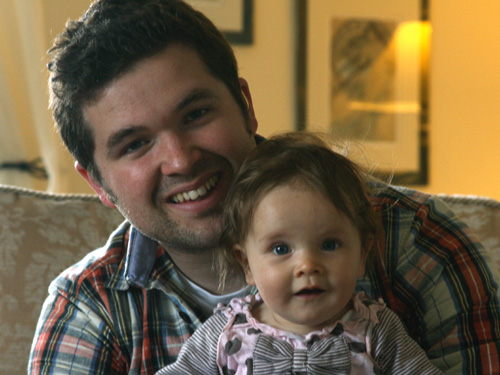 Charlie Swinbourne on some of the things that could only happen to a hearing-aid wearing dad.

Every night, shortly after dinner, I become a human climbing frame. My daughters Martha (three years old) and Edie (15 months) take turns jumping on me and climbing up my back, while giggling their heads off.

Sometimes they'll playfully try to catch hold of my hearing aids. To them, trying to get the beige plastic things Daddy wears in his ears is fun, but in order to protect NHS property, you understand, I'm forced to perform my mildly scary dad's tiger roar to fend them off.

My wife and I are deaf, while both our children are hearing. So in auditory terms, we now live in a mixed household.

When Martha came along three years ago, we suddenly had to keep the noise down - something that doesn't come instinctively to us, you'll understand. So, flushing the toilet at night, watching the TV with a high volume and speaking too loud (my main habit) were quickly banned when we realised they disturbed her, and the neighbours (presumably) rejoiced. 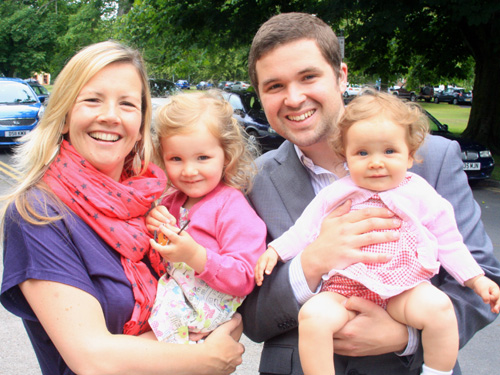 Although Martha isn't deaf, we signed and spoke to her from birth. When she was ten months old, she copied us and signed "duck" in the bath. Sign language gave her a head start in communication.

Naturally, at three years old, speech has taken over. Now our biggest challenge is gently reminding her that if she runs around the house chattering away without looking in our direction (making it hard to lipread her) we won't understand a word she's saying.

Edie has only just started walking and is still at the point where she communicates visually. She's gradually beginning to copy sounds she hears, but for now we joke that she's our 'deaf baby' (arf) because she signs all the time. In true deaf person style, she's constantly waving and tapping us, in order to grab our attention.

Meanwhile, Martha is getting used to Daddy occasionally mishearing things. The other day, we were all driving home on the motorway when I was shocked to hear her say "Speed camera, Daddy".

She had to repeat herself a few times before I realised she wasn't warning me that I'd get a ticket - she was actually trying to say she was hungry. What I should have heard were the words "Cheese sandwich, Daddy". Whoops.

We're friends with a lot of other deaf parents who have children of the same age, but now Martha is going to pre-school, we've recently been meeting up more with parents who are hearing.

Communication isn't as clear with this new crowd - without the luxury of signing, you're mostly depending on lipreading - but as we attend more toddler birthday parties, we're rather enjoying the occasional escape from the 'deaf bubble' because copious amounts of chocolate and cake get consumed. By the parents, mainly.

The one thing I find awkward is the first question some people ask me when I mention that I'm a father. It's not whether my kids are male or female, a typical first question perhaps, but whether they can hear or not. Once, someone asked if my children had "caught it".

My view of deafness has never been negative - I'm deeply proud of sign language and the deaf culture I grew up in.

Jo and I both have deaf relatives, so there was a small chance Martha and Edie might have been born with some level of deafness. This might surprise some people, but we wouldn't have been devastated if that had happened - as deaf people, we have all the tools we'd need to give a deaf child the best start in life.

As it is, being able to sign and speak effectively means Martha and Edie are bilingual, and their experiences of communicating with both deaf and hearing people will stand them in good stead as they get older and approach new situations.

Although our experiences are different because we're deaf, in every other way we're just a normal family, doing things slightly differently. Like other parents, we want to give our children the happiest childhoods we possibly can, along with, naturally, all the human climbing frames they could ever have dreamed of.

Are you a deaf dad or mum? or perhaps your parents were deaf? Tell us about your experiences of parenthood or childhood in the comments below.