The Quadfather - aka World no 2 quad tennis champ Peter Norfolk - joins us to explain wheelchair tennis ahead of Wimbledon red button coverage on the BBC this weekend. And we're all about social media with a roundtable discussion on how disabled people are using it. Rob Crossan and Kiruna Stamell present.

Listen or subscribe to the show by following this link

• Kiruna is branching into a bit of standup comedy, something that pretty much all of the other Ouch! presenters have tried at some time or other. What 'short person' gags does she crack, if at all? And Rob wonders why there aren't more disabled comedians - what's on his mind? 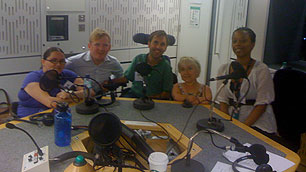 • Current world number 2 quad tennis champ Peter Norfolk joins us to explain the rules of quad tennis ahead of this weekend's grand slam doubles wheelie event at Wimbledon. BBC Sport Exec Tony Garrett also makes an appearance and gives details on how you can watch the matches via the BBC's red button service on digital television. Don't miss it. Have a party round your telly. Check back on the Ouch! blog later in the week for more details of what you can see, when and how.

In other news, Mat Fraser and Liz Carr are reunited on the next podcast due out in early July. We know Liz has been a bit sick but where's Mat been? On a soap on Irish television. possibly?

And, if all goes to plan, we'll be meeting up with Jazz and Bev - a daughter and mother both of restricted growth - ahead of their new encore TV series 'Small Teen, Bigger World' now confirmed for July 12 on BBC Three. Plus a look at the recent computer hacker cases "through an Asperger lens" as they say.