What does the control of potato cyst nematodes have in common with the protection of chickens kept for meat production, and with methods to calculate accident costs? 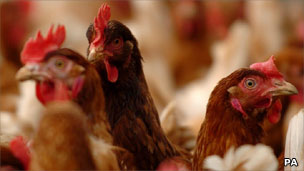 The answer is that they are all the subject of EU directives which the European Commission believes the British government is not properly implementing.

Following FOI requests from the BBC, the Cabinet Office has been forced to disclose the list of cases where the Commission has set in motion the first stage of infraction proceedings against the UK - these are the measures taken when the Commission thinks a state is not fulfilling its EU treaty obligations.

Other issues listed include the conditions of transport for live animals, the management of flood risks, the sale of pyrotechnic articles, obstacles to the use and importation of caravans - and erroneous tariff information about certain categories of garlic.

These are cases where the Commission has sent what is called an Article 258 letter (previously Article 226), formally notifying the government of the complaint that it is infringing EU law and seeking a response.

The Commission publishes press releases if and when the second stage of the infraction process is reached, the issuing of a "reasoned opinion". This threatens the member state with legal action in the European Court of Justice if it does not comply.

But until now the British government has insisted on keeping secret the list of those cases which remain unsettled where the Commission has started infraction proceedings with an Article 258 letter but has yet to produce a reasoned opinion.

The BBC made a freedom of information application to the Cabinet Office for this list in January 2008, nearly three years ago. The government refused to release it on the grounds that it would damage the UK's relations with the EU.

We then appealed to the Information Commissioner, who rejected the government's case [84KB PDF] in June this year. He argued that there is a public interest in knowing to what extent the UK is meeting its EU obligations, and also that disclosure would enable members of the public who are directly affected to voice their opinions on how directives should be implemented in the UK.

The Cabinet Office complied with the Commissioner's ruling by sending us details of cases from early 2009, the nearest it held to the point when we made the FOI request.

We naturally wanted an up-to-date list. However, when we then asked for that, we were astounded to be told by the Cabinet Office that it needed extra time to assess the public interest on whether to release the material as it could harm the UK's international relations. Once we pointed out that this clearly ignored the precedent set by the ICO's decision, the Cabinet Office provided the current list.

Presumably therefore the government will now comply with any future FOI applications for a contemporary listing of cases where the European Commission has initiated infraction proceedings against the UK.