Why Tony Blair thinks he was an idiot

"You idiot. You naive, foolish, irresponsible nincompoop. There is really no description of stupidity, no matter how vivid, that is adequate. I quake at the imbecility of it." 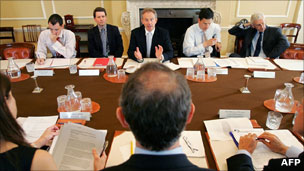 These are the words Tony Blair addresses to himself in his memoirs while reflecting on his government's introduction of the Freedom of Information Act.

He claims that FOI is not used, for the most part, by "the people", but by journalists. His view is that "For political leaders, it's like saying to someone who is hitting you over the head with a stick, 'Hey, try this instead', and handing them a mallet."

And he says there's another reason why it's dangerous: governments need to be able to discuss issues "with a reasonable level of confidentiality". In his Guardian interview today, he expands further:

"If you are trying to take a difficult decision and you're weighing up the pros and cons, you have frank conversations... And if those conversations then are put out in a published form that afterwards are liable to be highlighted in particular ways, you are going to be very cautious. That's why it's not a sensible thing."

Of course, some people say the same about ministerial memoirs, but that's another issue.

None of this is very surprising. One of his former advisers in Downing Street told me that FOI was the worst thing the Labour government had done - and that was in 2005, before (in Blair's words) "the full folly of the legislation had become apparent". It was perfectly clear that freedom of information was not popular in practice in Tony Blair's Downing Street.

And of course it's all very different to the views on FOI he expressed when leader of the opposition, when he presented awards for the Campaign for Freedom of Information. At that time he thought "The very fact of its introduction will signal a new relationship between government and people: a relationship which sees the public as legitimate stakeholders in the running of the country and sees election to serve the public as being given on trust."

Then he justified implementing FOI on the basis that "if a government is genuine about wanting a partnership with the people who it is governing, then the act of government itself must be seen in some sense as a shared responsibility and the government has to empower the people and give them a say in how that politics is conducted."

It's not unusual for people to change their views once they're sitting on the other side of the fence. But there are some gaps in Mr Blair's self-critical account of his government's FOI policies.

Although he admits he criticises his officials for not warning him of the damage he now thinks he was doing when legislating for FOI "in the first throes of power", he doesn't point out that the Act eventually introduced was actually a much weaker version than the plans his government initially proposed. Maybe he should be more grateful to his Sir Humphreys.

Nor does he mention that after FOI came into force his government decided to change the regulations so that fewer requests, especially tricky and troublesome ones, would succeed in coming under the cost limits. These plans were abandoned by Gordon Brown when he took over - but then, as we know, that's only one of many things they disagreed over.

But while it's easy to grasp why Mr Blair was irritated by media FOI requests to Downing Street, it's harder to understand why he thinks they resulted in the free supply of mallets to journalists wielding blunt instruments against him, or why he says of FOI that "the power it handed to the media was gigantic".

It's obviously true that MPs as a class got thoroughly battered by the media's FOI mallets during the expenses row, and Gordon Brown took at least one tough blow personally, but Mr Blair himself never got hit very hard by FOI.

I suspect something rather different may be going on here. Because there was another area, not freedom of information, where Labour's greater transparency did huge harm to Tony Blair's premiership and gave some very effective weapons to his enemies. That was the law requiring the publication of details of donations to political parties.

In due course this led to bad publicity over party donors - and the provision of huge loans to the Labour party which then did not have to be publicly declared and eventually prompted the "cash-for-honours scandal".

For Mr Blair, this investigation was undoubtedly one of the most stressful, disruptive and damaging episodes in his premiership. I wonder if at some point in this difficult period he thought ruefully of the Political Parties, Elections and Referendums Act (which introduced the disclosure of party donations) and muttered to himself "You idiot, you naive, foolish, irresponsible nincompoop."