This morning, the Treasury has released a tranche of data from its Coins (Combined Online Information System) database, which contains details of public spending across Whitehall. 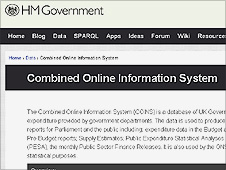 This represents a reversal of the policy adopted by the Labour government, which in the past few months turned down freedom-of-information requests from myself and others for access to this large dataset.

The Coins database became a symbolic target for open-government campaigners, and as shadow chancellor before the election George Osborne promised to release it as part of the Conservatives' transparency agenda.

Labour Treasury ministers had maintained that it would not be in the public interest to disclose this information. They argued [1.64Mb PDF] that potential misinterpretation of 23 million lines of raw and unvalidated data and a high volume of follow-up enquiries would be too disruptive to the Treasury's work.

Another factor Labour quoted was the "impenetrability of the information to a lay user". The new coalition government has tried to combat this by giving special advance access to the data to the Open Knowledge Foundation which runs the Where Does My Money Go? website, so they can help present the data in more easily intelligible formats.

There's a lot of information there (and some background here), and it's not easy to work out its significance. So please explore it yourself; my colleagues and I would be very grateful to know if you spot something you think is interesting or come up with good ways to analyse it. Please use the form at the bottom of this page. Thanks.

Update 1045: I wrote above that the Treasury has released a lot of data and that it's initially hard to assess its significance; it turns out that both are serious understatements.

The Open Knowledge Foundation has compiled a very useful browsable and searchable version, with its own "user's guide" to Coins.

Update 1130: This morning, I have also received a freedom-of-information response [570Kb PDF] from the Treasury which makes clear there are limits to the coalition government's open-data policy.

The Treasury is refusing to provide access to the current contents of the Coins database. The information it has provided today is historical data for 2008/9 and 2009/10, although the figures for the latter year are not yet complete. It is planning to issue previous years' data back to 2005/6 within the next fortnight.

However, the Treasury has told me today that it will not release data for current and future years, because this relates to the formulation of government policy, and some of it - for example, that relating to government trading funds - is also commercially sensitive. It argues that the material is exempt under the Freedom of Information Act because the balance of the public interest is against publication. It says that Coins data for 2010/11 will not be issued until June next year.

Last year George Osborne attacked Gordon Brown for not giving him access to Coins data. He was clearly referring to current data rather than historical information. In an interview with the BBC's political editor Nick Robinson, he said: "We will publish all this information, we will make it available to future oppositions".