How FOI can keep ministers busy

According to the Spectator magazine today, one of Iain Duncan Smith's first tasks as the new work and pensions secretary was to review a freedom of information request from a pesky MP. On asking who the troublesome MP was, his permanent secretary apparently told him: 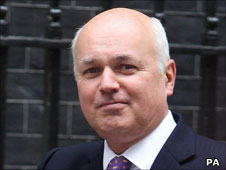 "It's you, Secretary of State, you've been on our back now for six months about this. I'm wondering, can I just brief you on this and end this issue?"

Perhaps, all over Whitehall, incoming ministers have been apologising to the staff in their information sections for the extra work they've caused until now, since Tory and LibDem researchers were certainly some of the most assiduous users of FOI. But I suppose hard-pressed FOI officers can at least console themselves with one thought - a coalition government means that there is one fewer opposition party to file information requests.

However, while not all of us can hope for a personal briefing from the permanent secretary in place of an FOI response, there are many who will share another aspect of IDS's experience - having to wait several months for any kind of answer.

The latest annual statistics [96KB PDF] for UK central government (published last month during the election campaign) show that there is still a serious problem of very long delays on some FOI applications.

And these figures must be underestimates, since they only cover applications resolved and thus exclude some of the longest-running and unresolved cases. The Labour government promised to tackle this flaw [32KB PDF], but only starting with the statistics to be published next year.

Incidentally, there was one intriguing detail in the 2009 statistics which confirmed doubts I have long held about the usefulness of these figures for comparing the records of different government bodies. My suspicion has always been that there are discrepancies between what different bodies count as FOI cases as opposed to "routine" information requests, which are generally much simpler and quicker to deal with and are not meant to feature in these statistics.

The 2008 statistics suggested that the Debt Management Office had a remarkably good performance record on processing FOI requests, dealing with all 332 resolvable application within 20 working days and supplying all the requested information in every single case. This made the DMO come across as the most efficient and open of all the 43 central government bodies covered by the statistics.

However the 2009 statistics explain what was really happening. Someone has spotted that in previous years the DMO figures included "a significant number" of routine, easily answered enquiries. In contrast the number of actual FOI requests the DMO received in 2009 was only 20.

The 2009 figures also suggest there are a couple of people in the new government who might now find themselves rather busy on FOI matters. Government departments rejected 267 applications under section 36 of the FOI Act, which requires "the reasonable opinion of a qualified person" that releasing the material would damage the effective conduct of public affairs.

In the case of a government department, the "qualified person" is a minister. But given the constitutional convention that most ministers do not see papers from a previous administration of a different party, and many requests made now will still be for documents from Labour's time in office, it could be time-consuming for the two ministers who are generally allowed access to such papers - the government law officers.

So the new Attorney General Dominic Grieve and Solicitor General Edward Garnier may now be putting aside time in their diaries to come to reasonable opinions on whether a variety of freedom of information requests would prejudice the effective conduct of public affairs, even setting aside the ones that originate from Iain Duncan Smith.