Chris Graham interviewed on his plans as Commissioner 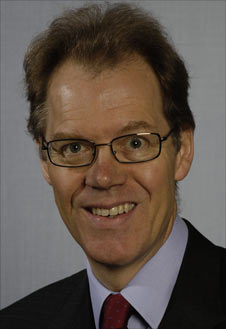 The new Information Commissioner Chris Graham says he's devoted the first phase of his time in office to "listening and learning". Now he has decided on what he's going to do to improve the effectiveness of his organisation - it's responsible for freedom of information and data protection law - and to tackle his most pressing challenge, the huge backlog of freedom of information complaints.

So if you're waiting for a decision notice from the ICO, you might have to accept (in his words) a "silver standard" rather than a "gold standard" one - but at least it should be quicker.

This increased priority for speed is one of the measures he will be adopting, as he explained to me when I interviewed him last week. He's also restructuring the ICO and, in a symbolic move, has decided to call himself its chief executive.

"I don't think the ICO will be listened to unless we are effective and that means being on top of the business," he told me. "People say 'don't talk to us about deadlines when you're taking forever to do cases'. I have to get the machine right, because only at that point will anyone take notice of what I've got to say on the wider issues of the day."

He believes part of the backlog problem is the length of time taken in compiling decision notices. "What really gums up the works is my people feeling they've got to produce everything to a gold standard with eleven pages of legal argument that would survive a prolonged case in the European Court of Human Rights, when it's probably about something that is really insignificant. We've just got to prioritise."

And he's willing to accept one of the potential consequences: "We have got to be prepared to risk that, on some issues that are not hugely sensitive, we produce a decision notice that doesn't dot every 'i' and cross every 'T' - and if the Information Tribunal overturns one or two, it's an embarrassment, but it's not the end of the world."

However, it could well turn out to be quite uncomfortable. Only last week the Tribunal criticised an ICO decision from June for its "insufficiently rigorous" analysis. The commissioner said he needs to have "a more extended conversation" with the Tribunal about his new approach.

Mr Graham, who took up his post in June, has also decided on a major reorganisation of the workings of the ICO, gradually removing the internal division between its FOI and data protection functions. He told me that an integrated operation would help the ICO "operate more effectively and efficiently" and "become more customer-focused". He wants to see it range fully across the ICO's roles from good practice education to complaint resolution and enforcement.

He regards it as a logical step which will make the ICO more joined-up and give greater flexibility in use of resources. He insists that he doesn't want to dissipate expert knowledge in the process, but this move may well worry those who have in the past criticised the ICO for a lack of specialist FOI expertise. It's also bound to be disruptive during its introduction.

His decision to give himself the additional title of chief executive of the ICO (which has 300 staff at five locations) is part of his new strategy. "It's just making it clear that it's very much a management job and that part of being the information commissioner is running quite an operation."

When I met him, Mr Graham argued that his staff are enthusiastic about change and morale has been improving. He described a "fatalism" that had built up over the backlog, with depressed staff saying that "my little bit won't make any difference". And he claimed that "actually we found that by emphasising the need to get stuck in, it's energised the whole place".

There's been a concerted effort to clear some of the older cases. "The oldest cases are always going to be the most sensitive, they are the ones which are most hard-fought. I'm very concerned to crack on with them. We're making a big inroad. The number of cases which have been with us for longer than a year is 13% down on the same period last year."

"I just found the whole organisation is really up for all of this," he said. "It's not a criticism of anything that went before. It's simply that the times demand more from us."

He has a five-year term in the job, and he is planning that these measures to boost efficiency and tackle the backlog will enable him to move on to other priorities during this period. "I hope that it isn't going to be the issue that dominates my term, because I hope we'll have cracked it long before then."

Although he has concentrated so far on the internal working of the ICO, he also told me: "We do need to change attitudes in public authorities as well."

Mr Graham is looking for more co-operation from public bodies during the ICO's investigations. He wants to be able to warn them: "We're not going to take forever on this case, so you can't just kick it into the long grass and think it won't come back to see you for two or three years. It's going to come at you now and if you don't provide the information that we need, then we will issue an information notice to require you to provide it."

An information notice is a formal demand under the Freedom of Information Act which the commissioner can issue to public authorities which are not supplying him with the information he thinks is necessary to assess a complaint. The ICO recently provided me with a list of the 91 information notices [351Kb PDF] it has sent to public bodies so far. Mr Graham told me that authorities should know that he is fully prepared to issue more.

And today, the ICO is publishing a study of publication schemes in central government [108KB PDF], which shows that four government departments have not complied with the legal requirement to adopt a suitable scheme for indicating what information they will routinely release and that many others do not follow the ICO's guidance.

"It's a bit patchy - some of them get it, some of them don't", said Mr Graham. "Some of the schemes don't do what should be there. Proactive and routine publication is easier and much less costly. It should be absolutely routine that details of contracts, value of contracts, expenses, minutes of top-level meetings just should be up there on departmental websites."

He's going to be attending a meeting of departmental permanent secretaries to try to get his message over to them.

However, he's not pressing for FOI to be extended to a greater range of private companies than is already planned. He believes there is a strong theoretical logic to applying FOI to organisations operating contracted-out services like housing associations, but he doesn't want his resources to be further stretched. "It isn't a cowardly answer, it's a realistic answer," he insisted to me.

As for his current level of resources for the ICO's FOI work, he said: "I'm not expecting an increase in funding, but we should be able to hold our own. I really don't want to be rattling the begging bowl." He added that he hasn't experienced any problems so far in his relationship with the Ministry of Justice, the government department responsible for the ICO.

He does see one advantage for the ICO in the current circumstances: "The information-rights agenda really plays into the politics of lean times, because it's a way of demonstrating value for money in the public services, a way of shining a searchlight into the dark corners of public spending. This really ought to be very popular with politicians of every stripe."

He wouldn't comment on the proposal that cabinet and royal papers may be made absolutely exempt from FOI for 20 years until the government issues its formal response to the Dacre review of the thirty-year rule. 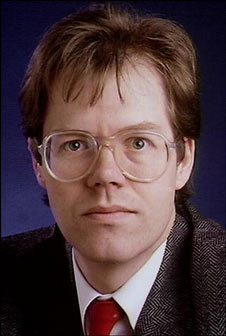 Mr Graham joined the ICO from running the Advertising Standards Authority, so he has experience of managing a complaints-handling body. Before that he worked for the BBC, first as a journalist and then in a top administrative role.

(This picture shows him 20 years ago in his BBC days. As you can see, the glasses have changed, but he may still be wearing the same tie.)

Some of my colleagues who remember him from his time at the BBC describe him as "cautious" or "careful", but this is a description that he rejects. "Some people think I'm being a bit reckless in the changes I'm making at the ICO. You have to combine care with energy and drive."

Mr Graham is also now getting used to the increased scrutiny that he personally will be subject to in this role. Recently, the ICO had to disclose his e-mail exchanges with the BBC, revealing that he had first accepted and then turned down an invitation from the BBC to attend the Last Night of the Proms.

"When I was at the BBC I never got that, so I started off thinking 'wow, great'," he told me. "But then I saw that the BBC is the second most complained about public authority - the Cabinet Office is number one, the BBC number two - so I thought 'don't go there'. It wouldn't have looked good."

"It's a slightly scary experience to realise that every e-mail you've ever sent will now be studied. It does make you think," he added, in a sentiment that may be shared by various other public officials.

I also asked him for his reaction to the content of the e-mails recently obtained from the University of East Anglia's Climatic Research Unit and published on the internet. He refused to comment on the detail, as the ICO may have to consider related complaints.

But discussion of the case prompted him to say this, which may well stand as a good summary of his position: "Everyone in receipt of public funds has got to wake up and smell the coffee and realise that we have had five years of freedom of information now and that's the deal - you get the money and you're accountable."