TV presenters in a pickle over how to stop sweating

You'll have gathered from other entries on this blog that it's hot here.

Very hot indeed. I'm not going to complain, I spend enough time during the winter months longing for warmth like this, but the temperature does present certain difficulties.

Put it this way: there's a lot to be said for working for radio outlets rather than television out here.

For television reporters there is the "sweat issue". 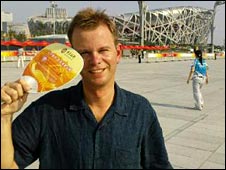 Maybe I just don't have the right deodorant, but I think the problem is far more fundamental than that.

I would challenge anybody to go outside in this humidity and not perspire a little. Now a little perspiration never harmed anybody, but I do feel obliged to have some sensitivity for the TV viewers.

The last thing that anybody wants to see on their television is a reporter drowning in his own sweat live on air.

I know that this is a rather unpleasant topic. Please feel at liberty to stop reading right here right now. But it has become one of the dominant issues in Beijing for those of us who have to try to appear in some sort of respectable shape on your television sets.

Yesterday morning I was due to do a live broadcast on BBC News from outside the Bird's Nest Stadium.

That's about a ten-minute walk from our office. No problem I thought as I set off with my producer. Ten minutes later it was a rather different story.

You can guess the rest. To be blunt I was in no fit state to broadcast. If I'd gone on air then terrified viewers around the UK would have been rushing towards their remote controls.

Common sense prevailed and we headed back inside, having explained to our bosses back home that "technical difficulties" were making the broadcast impossible.

That's ok once, but it's not an excuse that I can get away with making every day for the next two weeks.

Various solutions have been suggested. One of my colleagues has offered me some potion that he was given by the army in Afghanistan.

Apparently once you cover your face with it you get about a quarter of an hour "sweat free".

That bit sounds fine, but the next bit rather dimmed my enthusiasm. I'm told that once your fifteen minutes is up your face "explodes" with everything that has been covered up before and that your skin can feel numb for hours.

I have, though, received some assistance from the locals.

Yesterday afternoon I was filming at the athletes village. It was so warm that I snuck off for five minutes and found refuge in a bank. The air conditioning there was simply too good to resist.

I can't even begin to describe how fantastic it feels to walk into an air-conditioned room after a day out in the open air. I was like a weary sailor finally treading on dry land after a round the world voyage.

As I sat in the bank, relishing the cool, one of the members of staff approached me. I think I was probably the talk of the bank.

That's hardly surprising. I was the sweaty Westerner collapsed in a heap on the sofa in the middle of the building.

As the woman came towards me I could see that she was bearing a gift. It's something that I'm going to treasure for the rest of the trip. "You look very warm sir" she said. "Try this fan. It will help you."

How right she was. It's amazing. I now have man-made ventilation whenever I need it.

I know that the BBC doesn't carry sponsorship, but if you see me on television looking even slightly refreshed then it would be fair to say that "This broadcast has been brought to you by the Bank of China".

James Pearce is sports news correspondent for the BBC News Channel. Our FAQs should answer any questions you have.